The Way It Wasn't 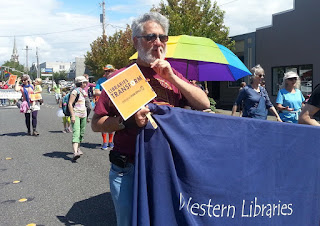 A month ago I noticed that my wife was reading The Underground Railroad by Colson Whitehead.  What made that particularly interesting was that I was reading Underground Airlines by Ben H. Winters.

Both of them fall into the genre of Alternative History (AH), which is usually considered part of science fiction.  Science fiction, more than most forms of fiction, is all about "What if?" and AH  asks "What if events didn't turn out as they did?"

The oldest example of AH we know of is about 2100 years old.  The Roman author  Livy pondered the question: What if Alexander the Great had gone west (toward the still developing city of Rome) instead of east?

Let's jump ahead past a few medieval examples and land in 1931 when John Squires published  If It Had Happened Otherwise, a collection of essays by different authors, speculating on how various turning points of history could have turned out differently.  One of them, "If Lee Had Not Won At Gettysburg," is a double twist (as you can probably tell), being written from the point of view of a historian in a world in which the South did win the Civil War.  He tries to speculate how things would have turned out if the North had conquered.

You may have heard of the author of that clever essay.  He later won the Nobel Prize for Literature, but Winston Churchill was better known for other accomplishments.

You may be surprised that an Englishman like Churchill should have chosen the American Civil War as his subject but that event seems to have an obsessive interest for alternative historians.  Remember those books my wife and I were reading?  Even The New Yorker  recently took note of our country's obsession with the Underground Railroad.

My favorite AH writer is Harry Turtledove and he was inspired to get a PhD in Byzantine History by an AH novel by L. Sprague De Camp called Lest Darkness Fall.  Turtledove's masterpiece is The Guns of the South  (Yup, that War Between the States again).  It starts with a real event: Robert E. Lee writing to Jefferson Davis in 1864 to say the Confederacy could not win.  Except in Turtledove's book the letter is interrupted by some strangers with funny accents who want to sell the South some new weapons called AK-47s.  You see, some Afrikaaners got their hands on a time machine and decided to nip Black aspirations in the bud by saving slavery.

You can argue that that is not pure alternative history since it involves a science fiction concept like time travel.  In that case you might prefer another  Turtledove novel - and it's a mystery! -  The Two Georges, co-written with, of all people, the actor Richard Dreyfuss.  The heroes are cops in the 1960s, but in this world King George III never went mad and when his colonies started protesting his policies he invited the leaders to England to discuss it.  The result is that George Washington became the first Governor-General of British North America.

Some of you may have seen the recent TV series, The Man in the High Castle, which is based (loosely, I hear) on a classic AH novel by Philip K. Dick.  It explores a world in which the Axis beat the Allies.

To my mind, there are two essential elements to an AH fiction: How did things turn out this way (as opposed to the way we know they did)?  And what would happen if they had?  At its best, AH becomes a thought experiment: If Nixon beat Kennedy, how would the sixties have changed?  What if the Spanish Armada had won?

I have had three fantasy stories published and while none of them are pure AH they all, shall we say, partake of its nature.

After George W. Bush became president, Edward J. McFadden III and E. Sedia proposed Jigsaw Nation, a book of stories that asked: What if the blue states seceded from the nation?  My story, "Down in the Corridor," takes place in the  narrow strip of land between Mexico and the Pacific States of America, connecting the USA with the Pacific.   Yes, it's a crime story, but it's not true AH because it was imaging an alternative near future, not a past.  (Recently Andrew MacRae came up with a similar idea for an anthology about post-current events.)

"Letters to the Journal of Experimental History" appeared in a short-lived humor webzine called The Town Drunk.  It's based on the multi-verse theory of time travel; that is, if you go back in time and, say, kill Hitler, it doesn't change our universe, it merely kickstarts a new one.  You can read it here.

And then there is "Street of the Dead House," which appeared in nEvermore! (and has been reprinted in Best American Mystery Stories 2016 and Year's Best Dark Fantasy and Horror 2016, he said modestly.)  This one is Alternative Literature, reinterpreting (without changing) a classic Edgar Allan Poe story.

Anyone out there like this genre?  If so, tell me your favorites.