What's in a Name?


by R.T. Lawton
For most people, their name and their reputation go hand in hand. Someone mentions a person by name and another person in that conversation automatically recalls whatever information they know or have heard about that name. If it is something honest or good about the name then fine. However, if the receiver in that conversation has negative information about that name, or receives derogatory information, then he or she will feel wary about that particular individual. And, therein lies a true story. True as in it actually happened, but...let's just say some of the details were changed, like names, for instance.

We had a federal warrant for a guy named Jerry Goldsmith. Jerry was alleged to be a young up and comer as a Jewish associate to the Kansas City mafia. He supposedly had a legit job working for a local insurance agency, but it was also rumored that he didn't have to show up and do actual work in order to receive a paycheck. In any case, Jerry turned to dealing drugs in order to supplement whatever income he did have. And, that's how the guy came to our attention. Seems one of our agents made a case on Jerry for distribution of several thousand amphetamine tablets, also known on the street as white crosses in the old days. With arrest warrant in hand, my partner and I were sent out to fit the young gentleman with a set of shiny metal bracelets.

Big Jim and I checked out the usual hangouts, but Jerry was nowhere to be found. Last on our list of addresses was an apartment for Jerry's ex-girlfriend over on the Missouri side of the river. Her residence was in a two-story, red brick, four-plex. We knocked on the front door at ground level. A young woman came to the door. "Yes, that's me," she said, "but Jerry isn't here."

While we were talking with her, a four year old boy appeared at his mother's side. "Daddy?" he inquired. "Yeah, he's upstairs."

Jerry, who must have been listening to our conversation while he stayed just out of sight at the head of the stairs, now descended to the front door. At this point, Big Jim and I took Jerry into custody and read him his Miranda Rights. As the cuffs went on, Jerry did not take his new circumstances well, nor did he choose to employ his right to silence. Since it looked like it was not going to be a quiet ride to the holding cell anyway, I took this opportunity to remind Jerry that his immediate situation was his own fault. I'm sure he expected a lecture about the long term consequences of dealing drugs, however, what he got was something closer to home. "Jerry," I said, "you really should have married the little guy's mother and made him legitimate. Cuz it was your own son who gave you up to the law." 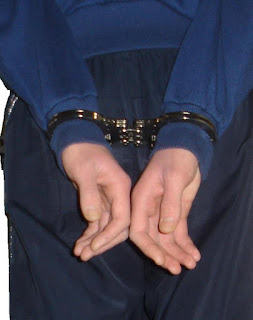 Jerry was quiet for a few heartbeats while he digested that thought, but then he started up again with his loud tirade. Seems I'd touched on a new sore spot.

The man was so disagreeable that a few months later, I started using a close variation of his name whenever I went undercover to buy drugs and make cases on dealers and their distribution organizations. For the next several years, even though Jerry was sitting in a federal pen staring out through iron bars, his name got used a lot. By the time Jerry got out on parole, his name was mud. Nobody trusted him as far as doing business with him in the criminal world. For years after, I often wondered if I'd helped Jerry keep to the straight and narrow path in his later life when he'd returned to the civilian world.

One of the main goals of U.S. Parole and Probation for its many clients is to guide each of those clients towards leading an honest life. One of their requirements is for said client to remove himself from his old ways and distance himself from his previous criminal companions. To accomplish this goal, the parole/probation agent tries to accentuate the positive aspects of doing so. I, on the other hand, I guess you could say, was on the other end of the balance, letting Jerry know in my own fashion that there were some negative repercussions waiting for him if he tried to return to his old environment, repercussions that had nothing to do with the threat of him going back to prison. It's a known factor on the streets that some hard core criminals don't take kindly to those low lifes who have allegedly made cases for the feds, whether they actually did or not.

After all, a rep and a name go hand in hand.

So yeah, I've wondered how Jerry's future went.  Was he smart enough to see the handwriting on the wall and therefore change his ways? Or did he take that long slide back down, the slide that would put him into the high percentage of recidivists where so many other convicts end up? And of course, there's always the cemetery or a car trunk if the bad guys can't take a joke.

Sometimes, it's all in a name.


So now, put on a costume and mask, go out in the world and pretend to be someone else.