Writing What You Know -- the Hard Way

We've all heard this advice: write what you know. I've had editing clients take this advice the wrong way, thinking if they haven't experienced something themselves, they shouldn't write about it. In actuality, if you want to write about something and don't have enough information to get the details right, then do research. Learn all about it. Then you'll be able to write about what you know.
I got some firsthand experience Friday night about kidney stones. I'd never had one before, and I hope I never go through this process again. It started as a slight nagging pain, as if I'd slept wrong and a small area of my lower back had a knot in it. Within just two or three minutes, the nagging had become throbbing, and I swallowed an Advil. Not ten minutes later, the pain had become so acute that I thought I had really injured my back from briefly (thirty seconds, tops) carrying something heavy earlier in the day. (Last autumn, I aggravated some back muscles carrying home my escaped dog--I had no leash with me when I found him. A diagonal area across my back suddenly began throbbing hours later. This pain was similar.) I found the leftover pain medicine from the autumn injury and downed a muscle relaxer. Ten minutes after that, the pain was still increasing, and with tears in my eyes, I headed to the emergency room.

The pain came and went over the next few hours in waves. Sometimes I had no pain whatsoever. Three minutes later, I was crying for help, my pain a ten on the 1 - 10 pain scale. That is the way with a kidney stone, I've learned, which is what they diagnosed me with. My friend Becky Muth told me that she had kidney stone once. The pain of passing it was worse than when she had a baby, she said, so much so that she said she'd "rather go through childbirth again than pass another kidney stone." Mine hasn't passed yet (I don't think). I'm afraid of what's to come.

I don't know if I'll ever have the opportunity to use this firsthand knowledge in my writing, but I began thinking that perhaps I know people with firsthand knowledge that might be helpful to me and other authors. So I asked friends to share their stories. Here goes.

Having Nearly a Fifth of Your Teeth Pulled at Once

I had my impacted wisdom teeth out long ago, and it wasn't fun. But it was nothing like what Becky (yes, same Becky from above) went through when she had six molars removed at once. Her words:

"I had six teeth extracted--all molars in the back. It felt like someone smacked me in the face with a baseball bat. The dentist's office miscalculated when I'd need [[to start]] my prescription, and the anesthesia started to wear off on the way home (about a thirty-five minute drive). I have an okay tolerance for pain as long as I have an outlet for general complaining, but this pain was so intense I couldn't speak. It hurt to nod my head when my husband asked me something. It was the first time I ever used painkillers around the clock. Two more dental visits are required to finish the work, and I'm dreading them. I'd probably choose the kidney stone. At least the medication for that caused me to sleep through a lot of the discomfort."

My friend author Meriah Crawford had terrible undiagnosed back pain. Turns out it was (is) a herniated disc in her lower back, but she didn't know that at the time. Her words:

"I have a herniated disc right now. It's given me my first real taste of what disability/chronic pain can be. Not sure I could handle it. What has struck me, though, is that it's less painful than the cramps I get (SO HORRIBLE), but I know cramps will pass and won't kill me. The fear (terror, at times) of the back pain gives it a whole other quality, though. I was genuinely afraid of becoming severely disabled or paralyzed through all this. When you don't know what it is, or you know enough to know it can be BAD, that's so much worse, at least for me."


Getting Pinned in a Car Wreck

"I was sixteen when it happened. One of those bizarre things; we had a sharp curve in the road, and the rear axle had crystallized, so when Dad thought it was a flat and tried to steer into the desert, it turned out the wheel was bent under the truck. He thought he was steering straight, but the front wheels were turned to compensate. When they hit a build-up of sand, it flipped us. [[The pickup]] flew forty feet before landing on the cab. I was stunned, blacked out when I thought I was pinned, then crawled out. My dad and I walked half a mile before a car came. I still wasn't feeling any pain, but turned out I had a broken pelvis. Perhaps I'm just one who's stunned first, doesn't feel pain until the adrenaline wears off. By the time help arrived (very rural area, a neighbor put a mattress in the back of his station wagon), I was beginning to hurt. I couldn't bend, so they had to pick me up and ease me onto the mattress for the hour-long ride to the hospital. [[It]] was so scary when I first woke up because I'm claustrophobic. Turned out I was sort-of pinned--between my dad and the back of the seat. I still vividly remember crawling out of the truck--both doors popped open--and seeing blood trickling down Dad's forehead. I was more worried about him than about me."

A friend who wishes to remain anonymous tells this story:

"I had meningitis about seventeen years ago this summer. Through a series of horrible bouts of bad luck, I wasn't properly diagnosed and treated for a week. (A small-town doctor diagnosed it as a migraine and gave me pills for nausea and pain, which helped a little). By the time the worst came (I passed out and was sent to the ER), the pain was so intense that ending everything seemed like a wonderful relief. I was young, newly married, and had a six-month-old baby, but I was perfectly happy to accept death if it meant I could escape the pain. I want to stress that that all changed as soon as a neurologist got a hold of me and admitted me into the hospital--within days I felt like a new person who would never trade her life for anything. I've never thought it was a scary or unusual part of my personality, but when I hear of people in intense pain saying they prayed for death, I give a proverbial shrug and say 'yeah, I can see that'."

Getting Your Nose Broken 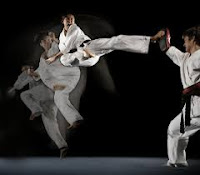 "I got my nose fractured at a karate self-defense class. The brown belt teacher was showing me how to break someone's nose. She made her hand into a stiff chopping weapon and promised to stop short every time. Once--fine. Twice--fine. Three times--WHAM! I literally saw stars and blood GUSHED out of my nose. It started to throb a minute later, and I got a wicked headache shortly after. It took forever to stop the bleeding and the next day my face swelled up and my got a very colorful bruise. To this day that side of my nose crackles a little and I can't rest sunglasses on it."

I'll wrap this up with a harrowing story from my friend author CiCi Coughlin, who has been shot and stabbed. Here she focuses on the stabbing, though she mentions the shooting too:

"The thing about an experience like [[being stabbed]] is it's rarely an accident. So, on top of the physical pain and trauma, you generally have a rash of emotions happening: panic, fear, a little bit of anger. There's also a sense of unreality, like it's such an extreme thing to be happening that you almost can't process that it's happening to you. In my case, it was a very unexpected attack when I was 18 and it was a fight for my life situation, so it wasn't just one stab, the end. By the time he stabbed me, I was already pretty banged up and had a concussion, so adrenaline was really high but I was also kinda wonky from the head damage. In some ways, I felt like I was both in the fight and outside watching, wondering who was going to win.

"Physically, being stabbed was two things. First, it was like a major impact, like getting punched in the shoulder, but with the added issue of a blade. I was stabbed with a very thin, long blade, so that part was more almost a burning sensation, I suspect because the blade was so fine. The other thing is, with a stab wound, there's an in and an out and they are two very distinct sensations. In my case, there was about a five-second delay in between, so it was even more so. Plus, I was stabbed in a joint. The blade nicked the bone, and I had some ligament damage, though not a lot. But I also knew, sort of somewhere in the back of my mind, that it wasn't a potentially fatal blow, and I didn't lose blood as fast as I would have with a torso wound, so I wasn't as woozy as I might have been. Oddly, I'd already been shot in the same shoulder a year or so prior, so I can kind of 'compare.' At least in a shoulder like that, I'd far rather be shot. Might have been different if the shot hadn't gone all the way through, though. The knife actually did, too, so I had a skin puncture front and back. The difference with the knife, again, though, is it doesn't just go in, it goes in and comes out. So it's kind of a double trauma. Also, the bullet was a stray; no one was trying to shoot me, so there wasn't the kind of personal malice to deal with. Even if they had been specifically after me, it still would have been at something of a distance. Someone has to be really in your personal space to stab you, especially from the front. It's very personal and one-on-one -- kind of a twisted intimacy, if that makes sense."

I hope this information is helpful to my author friends. If you have any additional personal experiences you think might help other writers, feel free to share. And they don't have to be bad things. I've never jumped from a plane, for instance, and I never would, but I'd be interested in what that really feels like to do it. And I'd be interested in whether the perspective changes depending on whether the diver was eager or scared before the jump. Readers, please share your experiences, good and bad!