Muhammad Ali and (not) Me 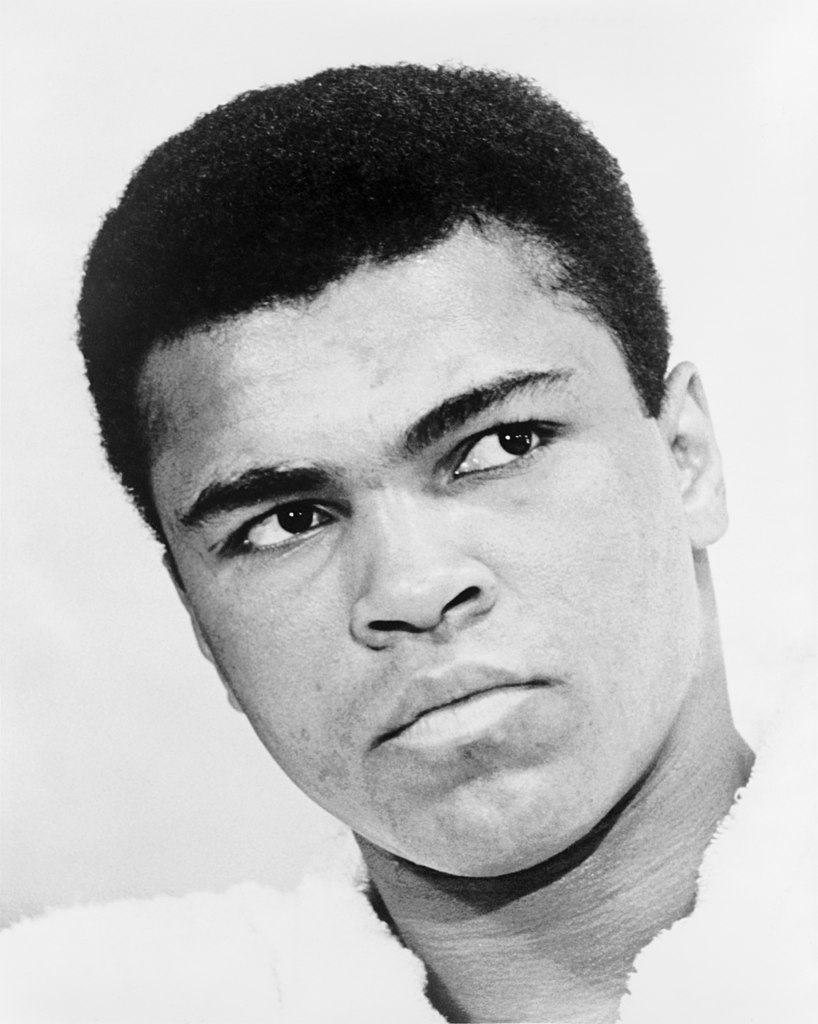 When I was a kid, Cassius Clay defined hero to my friend Rawhide and me. Our little town may have been rural and 99.99% white, but we admired his exuberance, perseverance, and his modesty. You know what I’m talking about: “I’m the greatest, I’m the best.” And he really was.

In the days before multi-thousand-dollar self-improvement seminars, we recognized self-talk. If he could envision it, he could make it so, and so could we. Those lessons became diluted in adulthood, but they still hold true: imagine and make it happen.

Don’t be misled, she’s smart, too, and one of the most charismatic people I’ve ever known. Among other talents, she gave seminars and for years she worked for Disney. Another characteristic was she knew virtually nothing about sports, music and movie stars. Oddly enough, those two traits, charm and lack of knowledge about the rich and famous actually qualified her for a plum job… working with celebrities.

So, by day, she ran– in fact reinvented– Disney’s Research & Documentation Department (named by yours truly in a consulting moment), the how-things-work people. But when Disney hosted ‘special visitors’† or what they call ‘celebrity events’, she’d find herself plucked off the job and assigned to a star of stage, screen, or sports, initially as a chauffeur and later as an attendant.

Disney’s maintains a ‘secure floor’ for VIPs in the Contemporary Hotel. Its attendants are selected because they, like Carla, neither fawn nor fuss. Celebrities are sort of like pets–they have to be fed and watered, played with and exercised without destroying the furniture. It’s a no-nonsense job, but done right, it earns respect. Michael Jackson used to ask for one particular manager simply because that man didn’t know who MJ was.

A Certain State of Being

Two or three times a year, Carla would pack a bag and disappear a week for a ‘celebrity event’. After her first event, we attended a small party with friends who asked who she’d been assigned to. Carla thought back and said, “It was a football guy… Joe… Joe… Oh, yes! Joe Wyoming!”

The only sound was incredulous jaws dropping. Finally one guy said, “You mean Joe Montana? Only the greatest quarterback ever?”

Did I mention Carla’s a natural blonde? She’s very smart and well educated, but she has more than her share of patented blonde ditziness, which she freely admits.

So she served as a driver or guide for the likes of Gladys Knight (“Loved her brother and Cousin Willie”), Dolly Parton (“She’s tiny except where she’s not”), and my favorite, John Lee Hooker.

Although she had to be schooled about George Lucas and Steven Spielberg, she knew who John Ritter was and found herself disappointed. (“He was mean to his wife.”) Here the adage about how one treats lesser mortals comes to the fore. Carla found Katharine Hepburn kind and considerate, but not Lauren Bacall. (“Maybe she was having a bad week.”)

Carla’s office was above the jewelry store and bakery on Main Street. The upper storeys of buildings are constructed with false fronts: a façade and outer wall, then a narrow passage, and an inner wall that encloses modern offices.

One day the Magic Kingdom grew extremely quiet, not a visitor in sight. Carla dropped downstairs almost into the arms of a special visitor she did recognize: a mother, her two boys, and a friend. Princess Diana and her companion were browsing the shopping counters in an empty park– Disney had closed the entire Magic Kingdom for four visitors.

Carla’s regular duties required her to travel around property, Disney’s term for the entire Walt Disney World complex (roughly 30 000 acres, 12 000 hectares), to carefully document how to operate rides, resorts, and hotels. Disney uses a fleet of anonymous white vans and she phoned for one to pick her up at the Contemporary. Dispatch promised to bring a van around within a minute or two.

Carla took a moment to powder her nose. When she stepped outside, she found a Disney van idling, its door open and waiting. She climbed into the van and sat… and found herself staring at a pair of cowboy boots. When she looked up, she found a guy with spiky blond hair staring at her.

“Who are you?” she asked in return.

He said, “You may know me as Billy Idol.”

As I mentioned, she’s extremely charismatic and within moments he’d opened to her, saying he was waiting for his children so they could visit Space Mountain in the Magic Kingdom. (Disney spirits celebrities into back entrances so they don’t have to wait in queues with hoi polloi.) They chatted like old friends until a second van pulled up, Bill Broad’s family came out, and security figured out there’d been a mix-up.

So we come to Muhammad Ali and by now, you know what to expect. Disney was opening their Sports Complex and invited a number of stars for the– repeat after me– celebrity event. Afterwards, Carla endured our interrogation.

“They told me he’s a boxer plus a sportscaster’s family, Howard something. The boxer trembled a lot. He was a big black guy.”

“You’e kidding. Do you mean Howard Cosell? And Muhammad Ali? Only the greatest ever?”

Even to a white kid from a rural school.