Sherlock Holmes by the Numbers

Recently I discovered a Sherlock Holmes story, previously unknown to me, in the government documents collection of the library where I work. No, this is not one of those rare-but-real incidents of someone opening an ancient box of manuscripts and finding an unknown treasure - like this one I read about yesterday. In fact, the story I discovered was not even by Arthur Conan Doyle.

It appeared, of all places in a book published in 1980 by the Census Bureau: Reflections of America: Commemorating the Statistical Abstract Centennial. As you can probably deduce, the book was intended to celebrate the 100th edition of Statistical Abstract of the United States. If you aren't familiar with these books, they are a type of almanac of varied data, covering whatever the Census Bureau thought was most important about life in the United States that year. 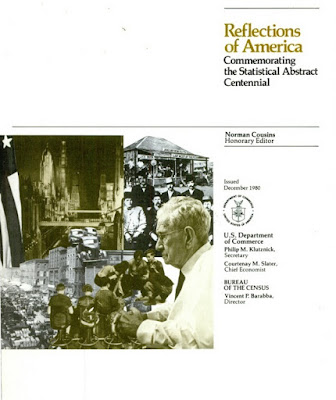 Just for kicks, here are some of the tables in Statistical Abstract, and the first year they appeared.  It gives you some idea when the public - or at least the government - got particularly interested in a topic. 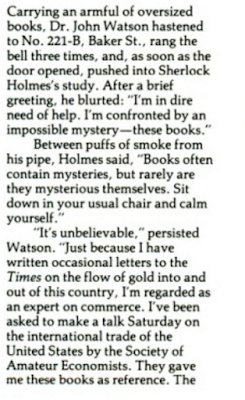 The essay on international trade, cleverly titled "A Case of International Trade," was written by business journalist J.A. Livingston,.  It begins as you see on the right over there.

It goes on for many pages.  You can read it all here if you wish.  But what I am pondering is: why would anyone think that's a good idea?

I'm not talking about parodies, or what I call fan fiction (creating a new case for your favorite detective).  I understand those impulses. But I think it is a bit weird to use a character for a completely different purpose than what made that character famous.

So, for instance, here are a few books about (or "about") Sherlock Holmes:

The Chess Mysteries of Sherlock Holmes

The Strange Case of Mrs. Hudson's Cat: And Other Science Mysteries Solved by Sherlock Holmes

What other fictional characters have become cats's paws for authors who wanted to teach a subject painlessly?  I knew without looking that one young lady must be on the list and sure enough:

I even thought of one book in which the author himself  did this to his character.  Harry Kemelman's Conversations With Rabbi Small is an introduction to Judaism thinly disguised as a non-mystery novel about the amateur sleuth.

I still say the instinct to do this is an odd one.

And as long as we are tying government publications to mysteries, let me point out an old federal document that is not available for free on the web: The Battle of the Aleutians: A Graphic History 1942-1943.   What's the mystery connection?  It was co-authored by a rather superannuated corporal who served in that frozen wilderness: Dashiell Hammett.