ComicCon results from two weeks ago:
"Zombie's one -- Human's zero!"

That, at least, is the way our nurse claimed that the X-ray tech reported the results of my wife's foot exam two Saturdays ago.  Those of you who read my last post, know that my son attended ComicCon in Phoenix.  But, what I didn't tell you is that my wife, Madeleine, went with him on Saturday because I had to work. 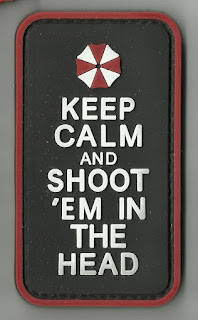 The first thing they did, upon entering, was scramble up to the top floor of the Phoenix Convention Center to the Zombie fighting exhibit, in which patrons pay a buck to be issued a cap gun and make their way through a cloth maze populated by folks dressed as zombies, who in-turn growl, lunge, grab at, and sometimes lightly grasp said patrons as they pass.  Want to make the zombie quit attacking you, shoot it in the head with your cap gun.

My wife understood the rules -- All but one!


You have to shoot a zombie in the HEAD, because that's the seat of the creature's malfunctioning brain.  My wife blazed away at the zombies, who mostly fell down -- except for one female of he species, who kept coming back for more.  When she snatched at Madeleine's foot, my wife stepped back and turned in the same instant.

Her reward?  The zombie gave up, and the fifth metatarsal (the long bone in the foot behind the pinky toe) on Mad's right foot went POP!  A spiral fracture, which the doctor said is sometimes called, "The dancer's break," due to the rotating back step that often proves the catalyst.  My wife, whom I first met while we both members of the  101st Airborne Division, then proceeded to accompany my son through the rest of that day's Comicon, a task that necessitates walking for (quite literally -- in the true sense of the word) miles.

She proved a sensation at the hospital that evening, however.  Nurses and orderlies kept sneeking in to ask, "Is it true?  You broke your foot fighting zombies?  How AWESOME!"

"We're getting old."  She shook her head.  "They aren't excited about the zombies.  It's the idea that an old lady broke her foot while fighting zombies.  That's what they find awesome."

Both of my feet still work, so duty calls.