I suspect I spend far too much time thinking about a thing called "Voice."

I don't think about voice, as it pertains to my writing, most of the time.  I figure the natural voice that comes out in the piece is probably the right one for it.  Of course, there are those times when I sit around wondering if I'm telling a certain story through the right point of view, and at those times I consider how changing the POV, or even perhaps the character who's narrating the work, might alter the story's voice.

There is quite a bit of emphasis placed on voice, these days, in the public school system -- even down to very early grade levels.  And, I can't help thinking it doesn't really belong there.

One reason I think this, is because many Language Arts teachers my kids have had can't seem to properly define voice, themselves, so I question their ability to teach the concept to others.  Another reason, is that I've run into a lot of high school and young college kids who have been taught about voice, in their early years, who wind up telling me voice means essentially: "Writing an essay so you can tell how I really feel about the topic."  They don't use that sentence, of course, but what they tell me boils down to what that sentence says.

Some of my son's Middle School friends, a few days ago, told me much the same thing, adding an idea that I'd heard before from other kids.  This idea can be boiled down to: "The best way to use voice, when writing, is to use the letter 'I' as in 'I think ...' or 'I feel ...' because this tells the teacher what your 'real voice' is about the subject."

As a parent who likes to support schools and teachers, I sometimes feel a bit hamstrung when I run into statements like these.  I don't want to further confuse the kids, but I do want to help them understand things a bit better.  And, I certainly don't want my son's grade to suffer because a teacher gets upset about first-person writing in an essay.

So, the other day, when my son's friends said this (They were all over at our place, working on a "Team Essay" assignment.) I asked them: "Any of you guys ever polished boots?"

Most of them looked at me as if I had three heads, but one kid had polished a pair of shoes on Sunday
mornings sometimes.  I took that as my lead.  I asked him if he used Kiwi wax.  He didn't know.

And, thus, I began my lesson.

Taking a pair of old Jump Boots out of the closet, along with a battered can of Kiwi and an ancient diaper, I sat down in front of them and began demonstrating how to spit-shine a pair of Corcoran Jump Boots.  They were all boys (thankfully, because I'm much better with boys than girls) and the idea of spit-shining army boots struck them as both cool and gross.

That's a good combination when you want to capture a Seventh Grade boy's attention.

I lit the wax on fire, first -- which blew their minds.  Then I parked the can lid on top to extinguish the flames, explaining that I was trying to melt the wax, in order to make it easier to spread.  When I pulled the lid back off, they leaned forward to peer at the melted wax in the can. 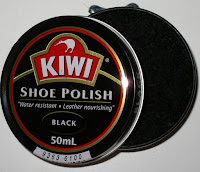 I dipped my diaper in the wax and began to spread it over the boot, while saying, "You know, polishing boots has got a lot in common with writing with voice.  I mean, there are guys who really just concentrate on the head-lights and tail-lights (I pointed to the built-up areas at the toe and heel of the boot as I said this.) and those guys do a good job of shining their boots.  No question about it.  But,,," And here I started polishing the uppers and the instep. "...if a guy pays as much attention to the rest of the boot, as he does to the head-lights and tail-lights, the boot gets polished just as well, but the result is a bit different, don't you think?"

As I worked, I had one kid put some water in the upside-down Kiwi can lid, and I used that water to polish the toe.  I pointed out that a lot of soldiers use water to shine their boots -- they don't really spit on them.

This resulted in a hubub of boys who thought I was saying that I didn't spit on my boots.

"Oh," I said, "I spit on my boots.  Like this."  I spit on the upper and started polishing it with the diaper.  After a minute, I stopped and said, "Look, can you see a difference?"  They agreed that they could (I'm not so sure they really could.), and I said, "Well that's one way polishing boots is like writing with voice.  See I can polish my boots with water, or with saliva from my mouth -- and both ways work -- but it makes things a just a little bit different, doesn't it?  The same way I can make things different by concentrating all my wax on just the head-lights or tail-lights, to highlight those things, or I can give the entire boot -- or my story or essay points -- equal emphasis."

They all agreed there was a difference, but they also unanimously agreed this had nothing to with voice in writing.

"Well," I asked, "what if I move the diaper in a straight line, instead of in small circles like I've been doing?"  I started using a straight line movement.  After a while, they agreed that the way I moved the polishing cloth did have an impact on the result, but not much of an impact.  I explained that the difference was subtle, and not easy to define.

They argued that it was easy to define, because they could see some straight lines in the area where I hadn't made little circles.  Then, because they were in 7th Grade, we had a discussion about the word 'subtle.'  I also tried to work in the idea that the straight lines they saw on the boot were part of the 'structure' of the wax I'd laid down and polished there.  "Aren't there subtle ways you could choose the words, or sentences you construct your essay with, that would also change the structure of what you're writing?" I asked.

In the end, I showed them that they could wave at themselves in my boots.  I'm not sure they finally understood my idea, but I did see some signs of understanding begin to dawn on a few faces.  Some of them seemed to realize that the way they wrote their essay had an impact on the way a reader understood that essay, much in the same way that a person polishing a pair of boots could influence the way somebody perceived the final shine.  I suggested they think about it, and try importing some of these concepts into their writing.  Maybe, I said, they could find a method of writing that would give a teacher the impression of what they really thought about the subject (they INSISTED this was necessary for the teacher to give them a good grade on 'voice' in their essay, so I finally went with it -- I mean, pick your battles, right?), but without using the word-letter 'I', or spelling things out directly.  If you're going for impact from 'voice,' I stressed, remember to keep it subtle.

Over all, it took about 40 minutes to get my point across.  And, another two hours of answering questions about every ten minutes, while they worked on their essay.  But, they got the essay done, and turned it in the next day.

We'll have to wait and see what grade they got -- assuming my son ever bothers to let me know.