1.  Thuglit.  You like mysteries?  You like short stories?  So, have you read Thuglit yet?  It is a good magazine, a paying market yet, and available in paper or electrons.  Eight stories per issue, very reasonable price.  I bring this up because editor Todd Robinson has announced that, barring an increase in sales, this will be its last year.  And that would be a shame.

How good is Thuglit?  It provided six of the Best Stories of the Week I reviewed at Little Big Crimes last year.  That's more than 10%.  Two of them made my Best of the Year; 15%.

And we're going to lose it because you refuse to chip in two bucks an issue, 25 cents a story?  Buy it here.


2. The Big Squelch.  Imagine that you submit a story to a magazine and get any of these replies from the editor:

"A fascinating romp through primitive territory."

"Easy to read, had a good hook, kept me interested and I loved the characters -- all of them."

You would feel pretty good, wouldn't you?  But each of these was in a rejection note received by Eric Wilder.  And in his list he tells you which editor said what about which story.  Fascinating... 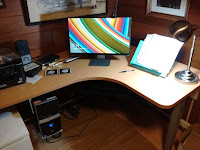 3.  Going Up.  And down.  A month ago I told you about my new desk which moves to a standing position at the touch of a button.  A few people asked me to report on how it has worked out - i.e. has it been sitting in the down position since the second day? 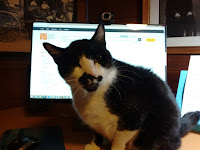 Well, I love it.  My goal is to use it standing up for half an hour and then switch, but often I am so comfortable standing up that I don't notice how much time has passed until one of my cats demands that I make a lap. So I highly recommend it for any middle aged backs out there.


4. Wuzza wooza buzzy fuzzy!  Chuck Wendig is a writer.  Apparently he often gives writing advice.  Last November he got a bit fed up with that routine.  The result is profane and hilarious.

That’s me yelling at the clouds and shaking my fist at trees, screaming: I EARNED THE RIGHT TO YELL AT YOU ABOUT WRITING. And then I hiss at birds. Stupid birds...

You should write in the morning unless you can’t or shouldn’t or won’t or whatever.

Be more literary! Be more genre! Be less this more that wait no the other thing.

This won’t sell until it does and then it sells a lot until it stops selling and nnngh.

You should do XYZ except unless ABC or 123 or wuzza wooza buzzy fuzzy.

5. The haunted bookshop?  I started this piece by inviting you to spend a few bucks on Thuglit.  Here is another suggestion for those suffering from too much moolah - especially if you live in my part of the country. 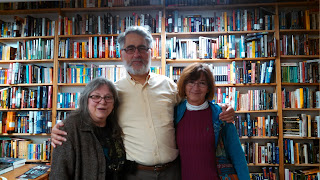 The Seattle Mystery Bookshop has been supporting readers and writers in our field for decades. (Attached is a photo of me at a signing  last fall with a couple of wonderful readers.)  Like a lot of small bookstores they need some help and happily they have the sense to say so.  There is a GoFundMe to raise some dough for them, and there are cool rewards for patrons.