Looking Back, Looking Ahead

The start of a new year always spurs me (and others, of course) both toward looking back and toward looking ahead—reflecting on what the last year has offered in terms of successes, failures, lessons, etc. and steeling myself to renew, refresh, or revise both my goals and my routines for the immediate future.

One of my constant goals is to "Write FIRST!!!"—a perennial resolution, though I'm lucky most days if I get to work on my own writing at all. But as I've struggled to keep that resolution and adhere to a writing routine, another routine has fallen into place. Whenever I do find time to work on my own fiction, I start out by reading a short something about writing—some little essay on craft, or another author's brief reflection on a published work or work-in-progress, or simply a glimpse into the writing life. Reading about writing, thinking about writing, somehow helps to set the gears in motion. 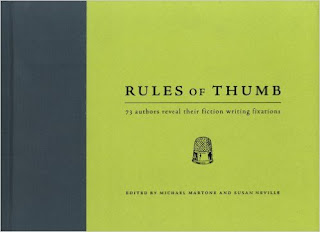 A book that I discovered last year and that has become a cherished companion in this regard is Rules of Thumb: 73 Authors Reveal Their Fiction Fixations, edited by Michael Martone and Susan Neville (Writer's Digest Books, 2006—now out of print, but worth seeking out used). It's taken me much longer than 73 days to read the essays here (testament to my irregular writing schedule), and in truth, I'm still a few essays away from finishing the full collection, but even as I push toward the end, I find myself still valuing the book immensely, whether or not "rules" offered are ones I'd ultimately apply fully to my own work. Just this week, for example, I read how short story writer Wendy Rawlings and her husband each write on desks made from unfinished doors (I like my own desk fine, thank you very much) and how she values "energetic disarray" as a means of getting work done—listing the books and objects on that desk and charting the ways in which they push her onward, something I can fully understand. (The essay is titled "Bricoleur's Mishmash.")

Rules of Thumb is not, I should point out, a craft guide in the narrowest sense of the term. While various authors might touch on craft at times (construction of character, shape of plot, point of view, adverbs), the approach is more generally idiosyncratic—ultimately less process-oriented than simply personal. And yet, over the time I've been reading it, I've flagged several passages with post-it bookmarks—passages that must have struck me as important enough to return to eventually, to ponder over again.

So, in the spirit of that looking back, looking ahead as the old year turns toward the new, I decided to page back through the book and revisit those passages for the first time. For better or worse, here are five that stood out:


I remind myself to make a story more complex when it seems one-dimensional, single-minded, predictable, familiar, or thoroughly understandable. Often the first draft of a story will feel flat, its options limited; I've allowed the events, dialogue, and characters' lives to become too narrowly focused. Make it more complex is my reminder to cultivate another aspect of the main character's life, a secondary character, a secondary line of investigation, a tertiary line of investigation, a pattern of images—something intriguing that is not (yet, apparently) directly related to whatever has become the story's whirlpool, its enormous, powerful, potentially reductive vortex.


Write by ear, not by rules. To do that well, your ear must be trained, which means you should listen carefully to language in conversation and stories and songs, as well as on the page. If you've forgotten how sensuous language is, how captivating, how musical, spend time with a toddler who's learning to speak. Linger where people talk vividly—a job site, farmers market, courtroom, coffee house, union hall—and write down what you hear.


From Steve Almond's "The Busy Attributive: A Case of Said" (which I'm certain I marked to pass along to students in my own workshops)

The attributive clause (otherwise known as that thing that comes after the quotation marks) is not a place where writers should feel free to dump plot information, character sketches, or authorial asides. It has only one basic job: to help convey how a particular piece of dialogue has been spoken.

And even this role, by the way, is limited. Because a good piece of dialogue should—by virtue of word choice, rhythm, and syntax—convey tone.


From Deb Olin Unferth's "Don't Tell It Like It Is"


The external world is not like fiction. In real life we repeat ourselves—day in and out, year upon year. We sit beside our lovers and say the same endearments or curses, make the same confessions, tell the same stories whether the face before us changes or not. We walk down hallways, make phone calls, answer them, saying, hello, hello, hello, how are you, how are you, you wouldn't believe what happened yesterday, this morning, last night.... We walk the same streets, visit the same desks or others like them. Our clocks, our steps, our very heartbeats follow the same pattern. In fiction such repetitions would be disastrous, like a gibbering idiot's scrawl, the same sentences over and over and over.

My friend Michael Stephens...told me that he could finish a novel on a half-hour a day, but he could not finish a novel on six hours every Saturday. I wrote a letter to Walker Percy shortly before he died, and he responded within the week. He shared with me the prayer he said before work each day: "I am starting from nothing. Help me."

I found three principles that are the bedrock of my writing discipline.

1. Writing can be defined as "not doing anything else besides writing." I don't write: I provide the space for writing to happen.

2. Regularity is much more important than duration.

3. If I knew what I wanted to say, I wouldn't have to write, I could just say it.