This is a Cold War story I hadn't heard before. Given that I'm a student of the history, and flatter myself that I'm reasonably well-informed, you gotta wonder, if I didn't know about it, it must have really fallen between the cracks - or had the lid put on tight. In either case, the story does some people credit, and although it's probably too late for others to suffer embarrassment, there's enough to go around.

In the late 1950's, the nuclear deterrent depended on the long-range strategic bomber fleet, before the emphasis shifted to ICBM's. Shore-based radar on the Eastern Seaboard covered coastal approaches, but Air Force planners needed to extend their reach, to increase the margin of warning time. They came up with the idea of building platforms at sea, like off-shore drilling rigs, but equipped with radar. They were called Texas Towers. The pilot program called for five platforms, overlapping coverage from Nova Scotia to New Jersey. Numbers One and Five were never built, but the other three were. Tower Four, the last commissioned, in 1959, was located seventy miles out, south of Long Island, near the continental shelf. Of the three towers, it was anchored in the deepest water, at 30 fathoms, and it was the least stable.

All the towers had structural issues. They rested on three legs - or caissons - which went down to the ocean floor. These were designed to be flexible, to absorb wave motion, and seas were often heavy. The platforms swayed in the wind, and shook with constant vibration from generators and other equipment. Victor Rioux, an electronics tech who served on Tower Two, says it was like living in a tin can. They worked twelve-on, twelve-off. Victor's longest single tour aboard lasted ninety days. The platforms had two floors for quarters, below the chopper deck.  You might be able to imagine the living conditions. Approximately sixty guys, with absolutely nowhere to go.

Tower Four took heavy damage from Hurricane Donna late in 1960, and it was decided to dismantle it.  It was being manned by a skeleton crew, fourteen military and fourteen civilian, when another storm bore down on them, January 15, 1961. Weather prevented helicopter evacuation from shore, but both the transport ship New Bedford and the USS Wasp tried to reach the tower. They got close enough to see the platform sink. They recovered no survivors.

It seems, in fact, very much a forgotten story. Here are a couple of links I found.  You may have to copy and paste. 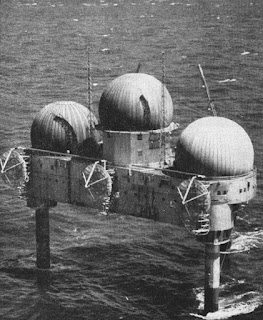 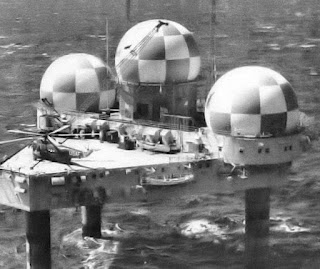 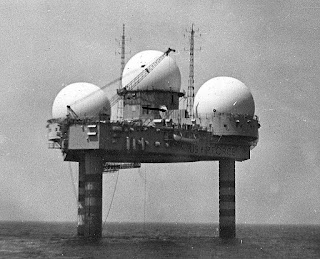 Very interesting, David! I'm also interested in the Cold War and also had no idea. Thanks.

Certainly a tragic piece of Cold War history, David. I had heard about this fairly recently. I believe it was in connection with discussions about the viability of wind power generators off the Jersey shoreline. I'm just not sure, though. I do remember being struck by the sad irony of Air Force personnel manning a doomed ocean platform.

Wow. This passage from your second resource link is *really* sad, that when the instability got so bad that men working on the tower were repeatedly thrown to the floor: "Commanding officer Captain Gordon Phelan made repeated requests to have the platform evacuated, in vain. Air Force heads refused to abandon the tower, fearing that nearby Russian trawlers harboured spies eager to steal the radar technology. Commander Sheppard later wrote “you don’t just walk off and leave millions of dollars of radar equipment lying around untended”." I had no idea about any of this.

I seem to recall having heard of towers used in this manner as part of the old DEW line, but I never knew any details, nor that one had fallen. Great post!

I agree with anon… too, too sad. I'd heard of the British 'sea forts', but not these.

I stayed on a much smaller civilian platform built on concrete pilings in Barbados. My last night there, a storm kicked up, which made for a sleepless night as waves pounded those pilings.