It's probably not any secret or surprise that our more familiar Christmas traditions date back to mid-19th century England and the Victorians. Victoria's reign began in 1837; her Saxony-born husband Prince Albert is supposed to have introduced the Christmas tree - a German custom - to Britain. Father Christmas apparently goes back to pagan times, the midwinter solstice, but Santa (a corruption of the Dutch Sinter Klaas, St. Nick) only showed up in the 1800's. The railway and the ha'penny stamp brought about the Christmas card, which dates to 1843, and that same year Dickens published A CHRISTMAS CAROL. 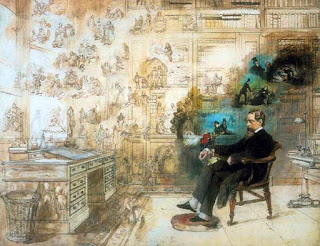 Dickens. Mmmmh, okay. I'm sure we have some differences of opinion, here. Both his critical reputation and his general popularity have gone up and down wildly in the last hundred years, and in fact they ricocheted pretty crazily during his lifetime. Some people admire his mechanics, some people think he's painting by numbers. Some people admire his sentiment, some people consider it treacle. Oscar Wilde remarked that a man would have to have a heart of stone not to laugh at the death of Little Nell, and that's hard to improve on. His technical skill is pretty much acknowledged, but then again, as Forster says, all his characters are more or less flat. They have no inner life to accommodate their outward eccentricities, they're simply a collection of gestures, their purpose entirely dramatic.

This isn't by any means a weakness. Quite a few writers ring effective changes on the skin-deep, and Dickens gets a lot of mileage out of his eccentrics. (His most lasting character of any depth is the city of London, too, and its many voices.) A CHRISTMAS CAROL draws its strength from the promise of redemption, and surely the fact that its spirits are familiars. Dickens himself was enormously entertained in the writing of it, and years later, reading it aloud and playing all the parts, for his immediate family or for a paying audience, he relished every cadence and effect. The story's got staying power. Nor do I think it's any real stretch to say Dickens effectively invented our idea of Christmas, or at least embodied it. He wasn't the first guy to write about it, and A CHRISTMAS CAROL wasn't his first shot - or the last, either - but it's the one that sticks to your ribs. And it's bulletproof. You can't fix it because it ain't broke. I was in 5th or 6th grade when I saw an adaption the 8th grade put on, and I was transported by it. Scrooge McDuck, or Alistair Sim. It goes the distance, and it's impervious to harm. That's the test. That it seems both faithful and new, every time.

The 'mystery' of Dickens - if you choose to put it that way, and I will - isn't the unfinished DROOD, or putting his wife out to pasture, in favor of an unsuitable attachment, or the most curious incident of the Staplehurst railway crash, blind chance saving his life. The mystery is his fresh eye. Dickens is not original, in the sense of discovery, but he reimagines the known, turning it back to front. What's different about him, and the difference he makes, is that he has a way of seeing the world, both in detail and in large. He uses, in effect, camera movement. He pulls focus. He approximates the zoom lens, or the dolly shot. Dickens was fascinated by the theater, by all kinds of stage business, tricks of the trade. How did he come by this sensibility, that I'd call cinematic? There's no analog for it, technologically, in his era. And yet Dickens seems so much of his time, a representative figure. I can't account for it. The pleasure is in the writing. 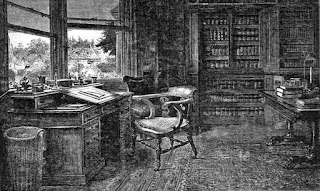 Such a nice post, David! I've always been of two minds about Dickens myself, but I've never delved into thinking about it in any detail--which makes me appreciate so much your reflections here, articulating things in a way that opens up a lot of thoughts for me on the subject. Much appreciate!
Art

I never liked Dickens. It took my son to change my mind. When he was about 12 years old, he read "A Christmas Carol" out loud to us (knowing I had only seen the movies) and paused after reading this passage: "The shouts of wonder and delight with which the development of every package was received! The terrible announcement that the baby had been taken in the act of putting a doll's frying pan into his mouth, and was more than suspected of having swallowed a fictitious turkey, glued on a wooden platter! The immense relief of finding this a false alarm!" I still remember the lights of our little Christmas tree behind him as my son looked up at me over the book and repeated the sentence about the baby and the doll's frying pan and the *fictitious* turkey glued to a wooden platter. "Now," he said slowly, "how can you possibly dislike a man who writes a thing like THAT?" I can't say as I have gone back to reread "Great Expectations" but suddenly I understood the glint of humor in the over-the-topness of it all. I guess it's true: it takes a child to lead us. :-)

Another Dickens fan.
He really is the patron saint of quality popular fiction and no one has ever written with more energy and brio.

Anonymous - I had a terrible time with, for example, BLEAK HOUSE (although there's a terrific Masterpiece Theater adaption with Denholm Elliott and Diana Rigg), but Dickens suffers from being force-fed to us in school. It took my pal John Crowley to rekindle my enthusiasm, with OUR MUTUAL FRIEND. In other words, I came back to Dickens as a grown-up, and a writer, and realized he's got a lot to show us. He's also a hell of a lot of fun, if you don't have to take him seriously for a homework assignment.

I believe it was the wonderful British quiz show QI that pointed out that - most uncharacteristically - England had white Christmases almost every year when Dickens was a child. And so English speakers all over the northern hemisphere believe that it's supposed to snow for that day.

I grew to love Dickens. I agree that most of his characters were fairly flat, and/or a series of gestures, but what gestures! He was obsessed with words, and his capabilities of description, of hitting the exact right word on the head - "misanthropic ice" - put most other writers in the shade. He was high energy - I've always suspected him of sharing a pipe or two with his good friend Wilkie Collins. As for being cinematic: well, perhaps he was just theatrical, or perhaps he was a time traveler. Who knows?
Great post!

After seeing the Mr. Magoo version, I read "Christmas Carol" when I was about eight or nine. It was my ticket to 19th Century London and produced some memorable dreams! Merry Christmas, everybody, and, as Charles Dickens observed, "God bless us, every one!"