I wonder if you have ever heard of George Ade?  Probably not, for most of you.

He was a nineteenth century Indiana humorist and Chicago newspaperman from Indiana.  While he wrote all kinds of stuff his longest-lasting material seems to be his Fables in Slang.  He capitalized all the slang words to show that he knew they didn't belong in proper English.

I learned about the man from the radio show of Jean shepherd, another Indiana humorist, the one whose tales led to the classic movie A Christmas Story.  The following Fable seems to have enough criminal element to belong on our blog.  Ade had a dry sense of humor and a rather grim view of "modern" society, as you will see.


THE FABLE OF THE INVETERATE JOKER


WHO REMAINED IN MONTANA


The Subject of this Fable started out in Life as a Town Cut Up. He had a keen Appreciation of Fun, and was always playing Jokes. If he wanted a few Gum-Drops he would go into the Candy Store and get them, and then ask the Man if he was willing to take Stamps. If the Man said he was, then the Boy would stamp a couple of times, which meant that the Laugh was on the Man. It was considered a Great Sell in Those Parts. 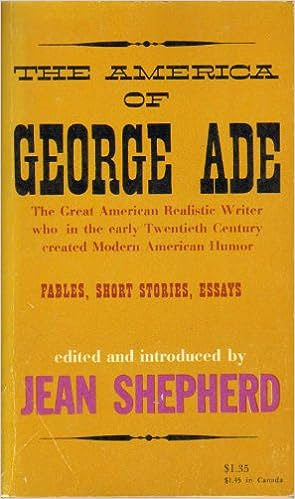 Or else he would go into a Grocery with another tricky Tad and get some Article of Value, and they would pretend to Quarrel as to which should Pay for it. One would ask the Proprietor if he cared who paid for it, and if he said he did not, they would up and tell him to Pay for it Himself. This one was so Cute that they had a little piece in the Paper about it.

Or they would go and Purchase a Watermelon to be paid for as soon as a Bet was decided, and afterwords it would Develop that the Bet was whether the Saw-Mill would fall to the East or the West, in case the Wind blew it over.

It was Common Talk that the Boy was Sharp as a Tack and Keen as Brier and a Natural-Born Humorist.

Once he sold a Calf to the Butcher, several Hours after the Calf had been struck by Lightning. As for ordering Goods and having them charged to his Father, that was one of the Slickest Things he ever did.

About the time the Joker was old enough to leave Home, he traveled out through the Country selling Bulgarian Oats to the Farmers. When the Contract for the Seed Oats got around to the Bank, it proved to be an iron-clad and double-riveted Promissory Note. The Farmer always tried to get out of Paying it, but when the Case came to Trial and the Jurors heard how the Agent palavered the Hay-Seed they had to Snicker right out in Court. They always gave Judgment for the Practical Joker, who would take them out and buy Cigars for them, and they would hit him on the Back and tell him he was a Case.

One Day the Joker had an Inspiration, and he had to tell it to a Friend, who also was something of a Wag.

They bought a Cat-Tail Swamp remote from Civilization and divided into Building Lots. The Marsh was Advertised as a Manufacturing Suburb, and they had side-splitting Circulars showing the Opera House, the Drill Factory, Public Library, and the Congregational Church. Lots were sold on the Installment Plan to Widows, Cash-Boys, and Shirt-Factory Girls who wanted to get Rich in from fifteen to twenty Minutes.

The Joker had a Lump of Bills in every Pocket. If asked how he made his Roll, he would start to Tell, and then he would Choke Up, he was so full of Laugh. He certainly had a Sunny Disposition.

Finally he went to the State of Montana. He believe he would have a Season of Merriment by depositing some Valuable Ore in a Deserted Mine, and then selling the Mine to Eastern Speculators. While he was Salting the Mine, pausing once in a while to Control his Mirth, a few Natives came along, and were Interested. They were a slow and uncouth Lot, with an atrophied Sense of Humor, and the Prank did not Appeal to them. They asked the Joker to Explain, and before he could make it Clear to them or consult his Attorney they had him Suspended from a Derrick. He did not Hang straight enough to suit, so they brought a Keg of Nails and tied it to his Feet, and then stood off and Shot at the Buttons on the Back of his Coat.

Moral: Don't Carry a Joke too Far, and never Carry it into Montana.
Posted by Robert Lopresti at 00:00