From the shiny new desk of Robert Lopresti

I am working mostly at home for the next few months, and my wife said: "We've  had this desk for thirty years.  Let's get you a better one."  I  thought that was a great idea and added a detail: let's make it a standup/sit down desk.

And that's what we wound up with.  You can see it in the pictures.  There are four pre-set buttons.  If I want to work standing up I press 3 and it floats to the proper height.  Press 4 and it sinks down again.  Terri touches 2 to get to her perfect standing position.

All of which is nice, but how exactly does it relate to the business of this blog: reading and writing mystery fiction?  Well, we'll get to that.

Back in October I mentioned that something happened at Bouchercon which I wasn't going to describe because I intended to turn into a short story.  A couple of weeks went by and that basic idea had refused to turn into a story plot.  Then I remembered a book I had picked up at Sasquan, the World Science Fiction Convention, I attended in August. 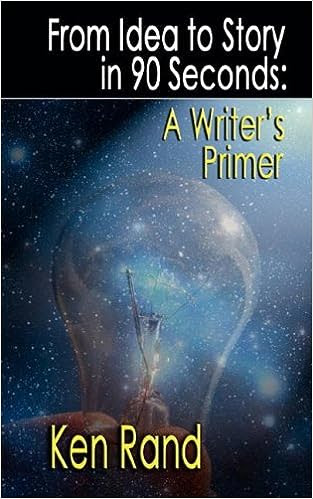 From Idea to Story in 90 Seconds is a little paperback by Ken Rand.  The title attracted me because I have a notebook containing a few hundred ideas that have never resolved into stories.  I wasn't expecting Mr. Rand to supply any miracles, and of course he doesn't.  Mostly he offers some interesting metaphors (although he describes himself as "metaphor challenged") and some exercises.

He spends a lot of time working on ways to get the Left Brain (the Editor) out of the way of the Right Brain (the Author).   "Why is your left brain such a jerk?" he asks.

Personally, I don't like the hemisphere stuff; it strikes me as biological reductionism (in normal people the two halves of the brain do communicate, after all).  I prefer to use the terms Miner and Jeweler.  But I do understand the importance of giving the Miner as much room as possible, and Rand has some useful thoughts about that.

For example: "The best drug ever prescribed, in my opinion, is placebo.  (Until recently.  I've switched to New, Improved Instant Placebo (R), in mint-flavored gel caps.)"

In other words, when it comes to stoking creativity, whatever you think works, really does work.  And in that sense my new desk (remember my new desk?) can be seen as a placebo.  I know that I can't give the creative part of my brain orders but I can flatter or if you prefer bribe it by spending money.  Go to a conference.  Buy Ken Rand's book.  Get a new desk.


Why does that work? I think in most people the creative part of the brain, the Miner, is lazy because it has been trained to be lazy.  You say that if you got a great idea you'd run like a cheetah straight to the keyboard, but when a light bulb does present itself you turn on  a Simpsons rerun instead.  Spending money and/or time convinces the Miner that you will take its work seriously.  (And of course, if you spend big bucks you will feel obligated to do something to justify it... see how it all comes around?)

Of course, there's more to my desk than that.  It's a better work station and that helps with organization and writing.  Plus the stand-up aspect is great for my increasingly middle-aged back.

But lets get back to Rand.  How did his 90-seconds approach connect to my Bouchercon-inspired story idea?   Well, what follows combines his method with my own.

* I sat down with a pen and paper, far from my magical stand-up desk.  (Rand recommends separating the Author tasks from those of the Editor in as many physical ways as is practical.  Generally I Write analog and Edit digital.)
* I wrote down my original idea.
* I wrote down in one sentence each the three unsatisfactory story plots I had hatched so far.  (Rand says: throw out the first few plots you get from an idea; those are the easy cliches.  In songwriting we say, when you start with a set of lyrics, throw out the first few tunes that come to mind.)
* With an eye on the clock I started writing down a new story structure, using pieces of those first three plots.


So, did I really come up with a satisfactory story plot in ninety seconds?

It only took seventy.  And, of course, I don't know whether I will really shape up into something publishable.  In a few years, we will find out I guess.

And now if you will excuse me, I have to go back to my desk...
Posted by Robert Lopresti at 00:00