This week marked the end of classes at George Mason University where I teach—at least class meetings, though finals and lots (lots!) of grading still loom ahead.

The last book we studied in my course "Five Killer Crime Novels" was Megan Abbott's Bury Me Deep, a 2009 novel inspired and informed by a real-life murder and murder trial from 1931: the case of Winnie Ruth Judd, known as the Trunk Murderess, the Blond Butcher and the Tiger Woman. Judd was convicted of killing two of her friends, dismembering one of them and stuffing both bodies into trunks which she then shipped from Phoenix to Los Angeles. It was only when she went to pick up her cargo that she found herself in trouble: The trunks were beginning to smell...and to leak.

In advance of reading Bury Me Deep, the students and I dig through through the original coverage of the case in the Los Angeles Times—the manhunt ("Greatest Police Hunt in History of West") and capture; the background on Judd's childhood ("Preacher Backs Daughter") and her marriage to an older doctor ("Doctor Wants to Hunt Wife"); her friendship with the two victims and their own background ("Gay Revels Revealed, Narcotics Hinted at in Killing"); a confession that was discovered ("Found in Store Wash Room; Authenticity Denied"); a trial that included hints about the involvements of a Phoenix businessman whom Judd said "knows all about it" (but who skirted past being charged with the crime); and ultimately a conviction for Judd ("Death-Penalty Verdict Returns in Less Than Three Hours")—though I should stress that the story hardly ends there. 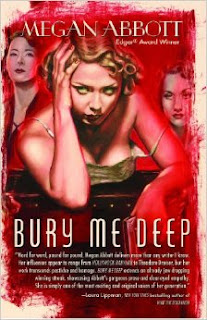 Building on some of those same documents and on later books about the case, Megan Abbott "began to reimagine Winnie Ruth Judd's story, with a different final act," as she tells readers in the Author's Note at the end of Bury Me Deep. Accordingly, part of what we study in class are the places where fact and fiction overlap, the points where the author has taken characters and plot in fresh directions, and in the process the ways that the novel opens up perspectives on both the character in the book (Marion Seeley) and the real-life Winnie Ruth Judd, on the place and predicaments of women in the early 1930s, and on the nature of storytelling in general—the struggle for control of a story, where truth resides and where it can be shifted, subverted.

I won't go into too much detail here about all those overlaps and intersections and divergences—though it's provoked some fascinating conversation in class. Instead, I want to focus on a more abstract discussion that's kept threading through that examination of text—namely, the differences in how we read fiction versus nonfiction.

For many people—and I don't mean just my students here, but also readers of my own age and older—the idea of reading fiction seems lesser somehow than reading nonfiction. "Fiction isn't about real things"—that's the kinds of thing I've heard from both students and friends. "I'd rather read about people who really lived, events that actually happened." Even in a case like this, where real events have informed a fictional treatment, students have fallen back on the novelist's ability to just make it up, to shift and transform in ways that diminish rather than inform a broader understanding of those real events. Once you diverge from the facts, they might argue, you also sacrifice something about the truth of a person or a situation.

As you might imagine, I'd argue against that idea—as a fiction writer myself, as a scholar of fiction, and even simply as a reader. To defend my thoughts, I could easily point to the ways in which readers can learn about another era or another culture though novels and stories about other times, people, and places. And even in terms of emotional engagement and investment, it's easy to explore the many ways that fiction becomes real to us. How many of us haven't at some point been caught up in the plight and the demise of a favorite character? How many people haven't cried at some scene in a book or a movie about characters who have no flesh and blood beyond those pages? I can usually bring up Harry Potter to the students in my class and offer up a scene or two for them to consider—none of it "factual," of course, but much of it becoming "real" in other ways to the readers, real enough that they have celebrated triumphs or mourned losses that never, any of them, actually happened.

But despite those examples, some divide frequently persists—and it's also easy enough to find support for the other side of the argument. Even I have read nonfiction books or watched documentaries or encountered books and films based on true events and caught myself thinking, with delight mixed into the incredulity, "Wow, can you believe this actually happened?" Just recently, I would point to Dean Jobb's Empire of Deception about master con artist Leo Koretz, and Clint Eastwood's film Changeling comes to mind too.  It's not just that these texts prove how fact can be stranger than fiction—surely it can. Instead, what strikes me is how we read/experience these differently knowing they're factual. What might be entertaining or thrilling or harrowing as fiction becomes something more; we have to process our incredulity as part of the reading/watching experience. These things really happened—we understand those texts in a different way because of that knowledge.

I don't know that I have anything definitive to say about this topic. In terms of Bury Me Deep, many of my students seemed to divide their experience of the book between those sections where Abbott diverged from the true story and those sections which hewed more closely to the "evidence" they had gained from the original  newspaper articles or from excerpts from journalist Jana Bommersbach's 1992 book The Trunk Murderess. Those sections based on fact seemed to give them insights into what might have really happened. Those sections that were clearly fiction (that "different final act," as Abbott herself called it) were at least to some degree relegated to fantasy, entertainment.

What are other people's thoughts about this? Do you read fiction and nonfiction with different expectations? How about fiction based on real-life events? I'm curious to know!