by Art Taylor
As many of you know, Art Taylor is a busy and talented guy. He has won two Agatha Awards, a Macavity, and three consecutive Derringers, and has twice been a finalist for an Anthony. His work has appeared in Ellery Queen’s Mystery Magazine, The Washington Post, Mystery Scene, and many other publications, and one of his short stories (along with stories by our own Rob Lopresti and David Edgerley Gates) was named in the “Other Distinguished Mystery Stories” list in the upcoming Best American Mystery Stories 2015. His novel On the Road With Del & Louise will be released in September. This guest post is his first column for SleuthSayers, and he’ll come on board permanently next month. Please join me in welcoming him! —John Floyd

First of all, thanks to John for the introduction here and the invitation to join SleuthSayers—and to everyone here for the warm welcome!

The title above—"Fresh Starts"—gives a nod toward this post being a debut and not simply a guest outing, though there's more to it than that, drawing on thoughts sparked both by where I'm at right now (more on that in a minute) and by my forthcoming book On the Road with Del & Louise: A Novel in Stories, which was the occasion of being invited for a guest post here in the first place. In the process, maybe there are some useful reflections ahead on the novel in stories as a form or on craft generally.

As I'm drafting this post (always draft, always revise), it's the first week of the semester at George Mason University where I teach—and these first weeks of school have always held a magical sense of new beginnings, not just as a professor now but hearkening back to my own earliest school days, new classes, new teachers, new subjects—usually new clothes too, trading out well-worn shorts for a couple of pairs of stiff Levi's. January 1 may be the time for resolutions, but to me, late August and early September have always felt like the true start of a new year. And though the soon-to-be-falling leaves might suggest for some a turn toward dying and death, autumn itself always fills me with a sense of possibility and of anticipation.

As a writer, I tend to think generally in terms of narrative, I guess—possibilities, plot points, the arc of a storyline—even as I reflect on my own life. So memories for me are grounded not necessarily by calendar year or birthdays ("I was eight when....") but by school year: This happened in kindergarten, this in fifth grade, this my junior year of high school, this my freshman year of college.

Maybe other folks are somehow dominated by seasons too with their stories, whether autumn or others: holiday tales and traditions; sordid spring break or spring fling stories; or those summer romances that generally fade with the return to school. How many freshmen college students have just recently had tough talks with their high school sweethearts? And if they haven't already, many of them surely will soon. More adventures to be had ahead, more thrills, more heartbreak, more everything. 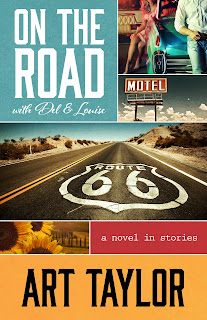 I've been thinking of "fresh starts" too with my book coming out in a little less than two weeks—and not just because it's my debut (of sorts; I've been writing a long, long time, after all) or because the title characters, small time crooks trying to go straight, talk time and again (and again) about the need to make a fresh start themselves. More to the point, it's because the novel is structured as six short stories, each with its own beginning, middle, and end—a concept that's already caused some trouble. Isn't it a collection then? because a novel is....

Short response to question/confusion: Each short story does offers its own fresh start, sometimes timed with the fresh starts that the characters are trying to make, and its own independent resolution, but together the six stories tell an overarching, evolving story of this couple's search for stability and for each other and for a sense of family and a place to call home—longer, stretchier narrative threads.

But even with that short response, I recognize that there are more possibilities for readers to stumble (one early Goodreads review complained about my "chapters" being so long) and there are aspects of such a structure that all us writers should consider as well with such a project: pacing, of course; the overlap between an individual story's narrative arc and the large story's broader arc; and—to keep circling back—the trouble of the "fresh start" for each component story.

Years ago, a friend of mine sent a manuscript for me to review—a terrific story overall, characters in crises both internal and externals, plenty of conflict, no lack of drama, but I was concerned about how the chapters always ended on a note of resolution, relief, calm. Some writers try too hard to close each chapter on a cliffhanger (need to get the readers to turn the page!), but this was the extreme opposite, and I suggested very simply that she just break up the chapters differently, slide those chapter breaks back a little on the interweaving narrative arcs of plots and subplots—makes those breaks somewhere in the rising action rather than always after the falling action.

Del and Louise get in plenty of trouble—both with one another and with others: a series of house break-ins against a recession-addled real-estate market; plans for a wine heist; a hold-up in a Las Vegas wedding chapel, etc., along with their continuing struggles to connect, stay connected. But with each story, I was trying to draw some resolution to the tale at hand (real estate robberies, wine heist, etc.) before making those fresh starts in new directions, even as longer, larger conflicts persist.

I hope that I paced it out OK. I can't help but wonder about the potential side effects of the breaks that result by these being stories. They could look like chapters, couldn't they? And how would that work?

I can't help but think of real life, of course, as I'm maneuvering through the fictional troubles of my characters. A friend of mine told me not long ago that he needed a break from everything: job troubles, relationship troubles, other troubles—and that was the word he kept coming back to: "break." So I asked him whether he meant "break" in terms of a "taking a break" (a vacation, for example) or in terms of "making a break"? ...meaning making a break with some bad choices, bad plans, bad circumstances. There was, I pointed out, a difference.

A renewed you and a new you are two different things as well. As Louise in my book says about another character, "He couldn’t get away from who he was, I thought—then realized maybe none of us could."

New Year's resolutions, the optimism and anticipation of a fall semester's first week, the opening paragraphs of the next in a set of linked stories—even that friend's sense that catching his breath might help recharge him to deal with lingering troubles.... I keep wondering if "fresh starts" are generally illusory, arbitrary—just a matter of shifting that "section break" to a different place in the ongoing narrative.

In real life, we hope not, of course! Unlike Louise's doubts, I remain optimistic about the possibilities for change: those resolutions, that renewal...even redemption. And I hope all that for my friend, always.

But in fiction, of course, it's the conflicts we crave—continual almost, a heap of grief. For Del and Louise, each new opening fortunately leads to the next round of conflicts—life as an escalating set of troubles.

Circling back, circling back again...and having said all that, I've got high hopes for my own new beginnings here at SleuthSayers, of course! May all my essays and reflections here go smoothly—saving any challenges and conflicts for my fictional creations, out there on other pages.

Looking forward to chatting and interacting with my fellow blog mates and our readers on future posts!