The Warped Relativity of Reading and Writing 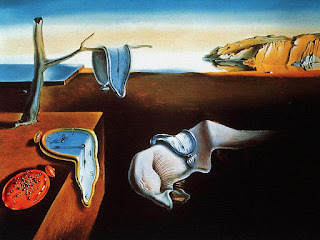 I'm always amazed by how long it takes me to write something, even if I know where it's going.
Something that only takes thirty minutes to read might take me a day or more to write.  And, that's just the first draft; I'm not including all the revisions here.

I don't know how many writers our there have this same problem.  Maybe most of you do.  On the other hand, some of you, reading this, might be asking, "What's this idiot talking about?  It only takes twenty minutes to write thirty minutes worth of material!"

As for myself, I can't help recalling something said by an English teacher during my Freshman year in high school.  We were reading Romeo and Juliet -- which I recall primarily because the entire Freshman class got to walk over to a nearby theater and watch a film version that we excitedly learned contained "a brief nude scene."  (This actually meant the film contained a split-second glimpse of "Romeo's" rear end, which greatly disappointed teen-aged me, as I had been salivating for a good long look at Juliet.) 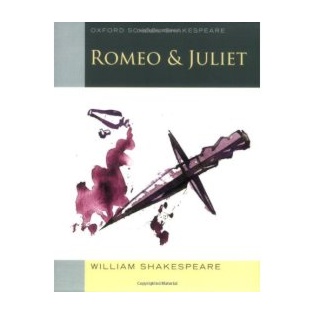 What my teacher said, as she handed out the books, was: "Read this tonight, and we'll begin discussing it tomorrow.  Most productions of this play last less than two hours, and that's with an intermission added in.  So, you should be able to read this in two hours with no problem."

Right.  An English class of thirty run-of-the-mill chowderheaded teens.  And we're supposed to read Shakespeare's version of English, written in Iambic Pentameter no less -- and understand it! -- all within two hours.  Not like I had to worry about Algebra or Biology homework that night, either, eh?

I wasn't able to read the entire play that night.  I don't know how long it took me, but it took me more than just one night.  And that bothered me.  A LOT!  Because, I also knew she was right: most versions of the play probably didn't run even two hours.  So, why did it take me so long to read it? I'm no Einstein, but could a teen-aged Einstein have read it inside of two hours?  I began to wonder.

And, speaking of Einstein: That brings up another problem with time, the one we call "relativity," in which we start speaking of time relative to other things, such as space, location, velocity -- or in this case: writing vs. reading.

According to the theory of relativity, I don't believe we're able to move faster than the speed of light. This concept always rankles me, as I keep asking, "Really?  Like there's some cosmic speed limit out there imposed by physics?  What happens if we speed, do we get locked into another dimension?" 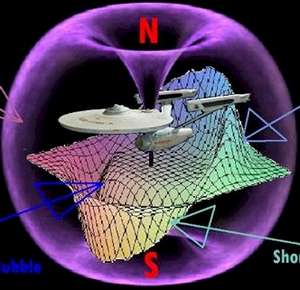 This provides great fodder for Science Fiction, of course, in which super-light travel is possible in another dimension, or can be equated by folding or (as they say in Star Trek) "warping" space-time" so that a ship can penetrate one layer of the fold and emerge on the other side without traveling over the entire length of the fold.

The pic on the left was created by Brandon Keys and posted on the IndegoSociety.org forum.  I thought that it, along with the pic below (from Wikipedia) showing a "worm-hole," did a good job of illustrating the concept. 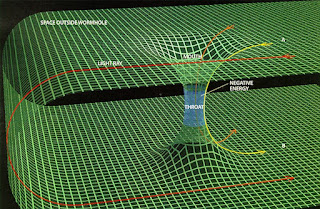 While we're on the subject of warping space-time, let's also look at what happens when a reader gets immersed in a fascinating book, only to discover that the ten minutes s/he thought s/he'd been reading, has telescoped into several hours.  How did that happen?  Did the book warp space/time? Or, did the reading take "relatively" longer outside the world of the book, than it seemed to take while the reader was immersed within the book's world?

I have no idea.  Did Einstein know?  Does Stephen Hawking know now?

I've never met either one of them, and thus have no idea.

Nor do I know why it takes me so long to write something it takes so little time to read.  It doesn't usually FEEL like it's taking so long to write such a passage.  In that essence, perhaps writing -- like reading -- can warp space/time, or cause some sort of "relativity occurrence" to take place.  Maybe, for instance, time in the world I visit while writing passes differently than time in "normal space."

The only thing I can figure is that it might have something to do with the speed my fingers move over the keyboard, relative to the speed at which the computer can print on the screen.  I have noticed, in the past, that my fingers can sometimes strike the keys -- when I'm "in the groove" and my writing is coming hot and heavy -- faster than my computer seems to be able to print.  Occasionally I even have to stop and let the computer catch up to me. 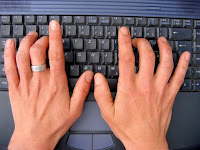 The speed at which things take place inside a computer -- an electronic item -- surely must be close to the speed of light, since that's the speed at which electrons are supposed to move.  Thus, if my fingers are moving faster than my computer can work, my

fleshy digits must be moving at super-light speed.

NO WONDER what I write seems to take less time to read than to create!

The solution -- obviously! -- is that people (or at least their fingertips) can move faster than the speed of light, but the punishment is not imprisonment in another dimension.  It's the hell of working for two days, then learning it takes only thirty minutes to read what it took all that time to write! 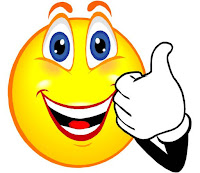 See you in two weeks.
--Dixon