by Eve Fisher
by Eve Fisher
Look, I love weird cases and wild stories, and this combines the best (or worst) of both worlds.  Meet Pierce (1804-1883) and Cornelia Connelly (1809-1879) of Pennsylvania.  They met and married in 1831, and Pierce, who had converted from Presbyterian to Anglican, got an American Episcopal Parish in Natchez, Mississippi.  They moved there and were happy for a few years.  They had a son, Mercer, and a daughter, Adeline.  Cornelia was beautiful and witty; he was charming and erudite. And then, in 1835, Pierce decided that he was called to convert to Roman Catholicism.  So of course he had to quit his parish and his ministry, sell his house, and move to Rome. 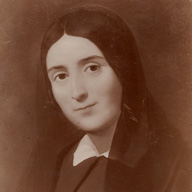 Off they went.  Pierce - who had a taste for the flamboyant - waited, and was received into the Roman Catholic Church on Palm Sunday, 1836, in Rome, at a very fashionable church.  (Cornelia had been received before they left, in a small private ceremony in Natchez.)  The couple quickly became hugely popular in Rome. Pierce got an audience with Pope Gregory VI, supposedly moving the pope to tears with his fervent religious passion.  Pierce also became friends with the ancient, influential, and wealthy Borghese family.  And he moved his whole family into a palazzo owned by the Earl of Shrewsbury, who became his patron.

All was well, except that Rome was almost 100% Catholic, and probably 90% clerical, and all the power lay in the hierarchy of the church.  Pierce - who had a wee bit of ambition - is mulling over becoming a Roman Catholic priest.  There was a problem:  He was married, and his wife was pregnant.  There followed a hiatus in which Cornelia gave birth to their 3rd son (John Henry) in Vienna, they move back to Natchez thanks to a bank crisis (they're not modern phenomenon, folks - Pierce's family got wiped out in the crash), and Pierce became a teacher.

Tragedy struck:  they lost a newborn daughter, and then 2 year old John Henry died after falling into a vat of boiling sugar.  Eight months later, Pierce announced he was definitely called to be a Roman Catholic priest.  Cornelia urged him to think it over (she was pregnant again, so she might have had some doubts about his being called to celibacy), but he was adamant.  So, after their fifth child, Francis, was born, Pierce sold the house, and moved to England with Mercer, leaving Cornelia, Adeline, and Francis in a convent at Grand Coteau.

Pierce apparently thought that he'd show up in England, go to Rome, be ordained, and easy-peasy, all would be done.  Instead, Pope Gregory told him to get Cornelia there so they could discuss things with her:  after all, it was her life, too.  Pierce brought her, and they all settled into a large apartment near the Palazzo Borghese.  Cornelia consented, the Pope consented, Cornelia moved into a convent at the top of the Spanish Steps, and Pierce began his theological studies.  She had one final talk (I'd have had more than a talk, I think) with Pierce, begging him to reconsider what he was doing and take care of his family - but he insisted on taking Holy Orders, which meant Cornelia had to - and did - pronounce a vow of perpetual chastity.  In June of 1845, Pierce said his first Mass, giving his daughter and his wife holy communion.

But what next?  Well, Pierce became chaplain for Lord Shrewsbury in England and took Mercer with him.  As for Frank, well, Pierce wrote a letter in which he said, "You know the Prince Borghese has taken charge of Frank's education, and he will be put either here in the College of Nobles in Rome, or with Merty at Stonyhurst in England...  So far, you see, things have been ordered very wonderfully."

Meanwhile, the English Bishop Nicholas Wiseman called Cornelia to come to England to educate Catholic girls and the poor, forming the Society of the Holy Child Jesus.  (This religious foundation still exists and operates, teaching children.)  So off to England she went.  Soon she was settled in, teaching 200 children, and doing pretty well.

And then Pierce showed up.  Unannounced.  Cornelia would not see him, and sent him a letter asking him not to repeat his visit.  He wrote back, and they exchanged a series of fairly bitter letters.  Pierce was apparently jealous of Dr. Wiseman - Pierce was used to having total control of his wife, and didn't like it that now she was obeying another man's orders.  Even if it was Bishop to nun.  In December of 1847, she took her perpetual vows as a nun and was formally installed as Superior General of the Society she had formed.  A month later, in January of 1848, Pierce removed the children from their respective schools without asking permission or informing anyone.  To be fair, according to Victorian English law, children were the property of their father...  He put 6-year-old Frank in a secret home, and took Mercer and Adeline with him to the Continent, ordering Cornelia to follow.  Instead, she stayed put.  Pierce went to Rome, where he said that he was the real founder of the Society of the Holy Child Jesus, and attempting to take over as their Superior.  No one bought it.  He came back to England, and demanded to see Cornelia, to become the Society's priest for Cornelia to leave the Society and come with him.  NOW.  She didn't.

So he filed the lawsuit "Connelly v. Connelly", asking a Protestant court "that Cornelia be compelled by law to return and render him conjugal rights."  (He omitted mentioning to the court that he was a Roman Catholic priest.  That came up later.)  The scandal was huge.  Anti-Catholic sentiment was rife Victorian England.  The general opinion was that here was a man robbed of his wife by the Papists, who'd shut her up in a convent and wouldn't let him even see her!  And the only reason they (the Papists) hadn't taken the children was because Pierce was smart enough to take them away himself.  Cornelia and Bishop Wiseman were denounced from Protestant pulpits, burned in effigies on Guy Fawkes Day, newspapers were full of the usual tabloid trash.  After a year, the judge ruled that her Roman law wasn't binding in England, and gave Cornelia the option of forcible return to Pierce as his wife, or prison.  An appeal was launched to the Privy Council.  Now, as we have seen, Pierce had already won the in the court of public opinion, and the Privy Council was just as Protestant as the regular court - But in the end, Cornelia won.

At least, she won her liberty - she could never win her children back (again, they were legally considered Pierce's property).  In fact, she lost two of them forever.  Pierce sent Mercer back to Natchez, where he died at 20 in 1853 of yellow fever.  Pierce took Adeline and Frank abroad, where he renounced Catholicism and earned a living from writing venomously anti-Catholic tracts.  Years later, Adeline was spotted taking care of an aging Episcopal priest at the American Parish of St James Church in Florence, Italy.  That was Pierce, had who re-embraced the Episcopal church and served there, unknown and unimportant, from about 1870 until his death in 1883. He is buried in Cimitero Evangelico degli Allori.  Francis settled in Rome, where he became a painter.  He loved his mother, but hated the Roman Catholic Church for destroying his family.  He never married, but had a daughter, Marina, who ended up marrying into the Borghese family (Pierce would have been so proud). Cornelia Connelly remained for the rest of her life in England, expanding her foundation, and dying in 1879 at the convent she founded in St. Leonards-On-The-Sea, Sussex.

But the memory of Connelly v. Connelly lingers as one of the strangest lawsuits ever to come up in British history.