You Asked For It (or: Changing Men's Minds Redux)

Not long ago, I posted an article linked to a story discussing the difficulties encountered by female police officers in Afghanistan.  At that time, I told you about one of my experiences concerning the education of foreign officers where females soldiers were concerned.

I also mentioned that I'd had a second experience educating foreign troops to change their view of women, and some readers asked me to post this experience, so that's what you'll be reading below.

I think I should point out that there are different ways of helping chauvinistic men see "the weaker
sex" in a stronger light.  Some of you may not approve of my particular methods in this case, but I hope you'll realize that my objective was to help soldiers in an army that was preparing to send troops into trouble spots for the United Nations, as well as other peace keeping organizations, avoid potential problems. 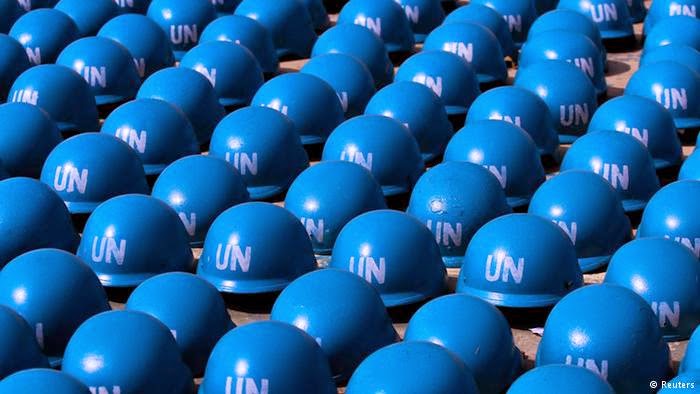 And, the biggest problem here was that we didn't want some unit subordinate to the UN, for instance, to commit war crimes.

Our concern was, because of these troops' cultural views on the roles played by men and women during armed conflict, they might ignorantly be led to shooting innocent people during a fire fight.

I'm not talking about "collateral damage" here: I'm talking about troops intentionally shooting innocent people, because they might hold the view that the gender of these folks made them legal targets on the battlefield.

The following is what happened:

My A-Team was working in a foreign country, running a leadership school for them, and the Host Nation held a demonstration of their military prowess (as is common when an A-Team visits). During this demo, they showed us the method they used to determine if a person was an enemy combatant or not. 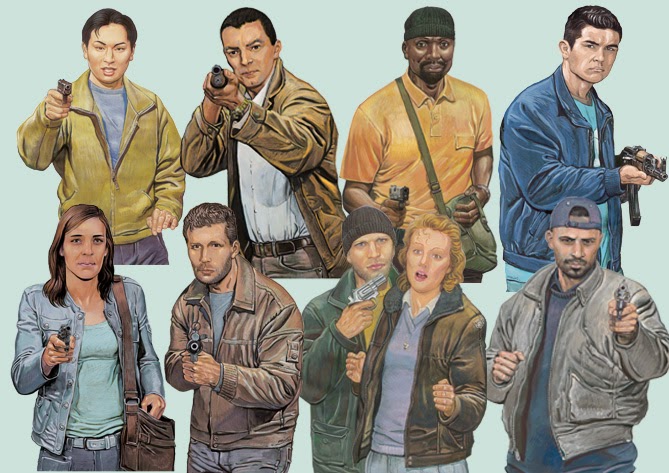 During the demo, they conducted a live-fire exercise against targets with full-color illustrated paper figures taped on the front, which were somewhat similar to the targets in the montage on the left.

Some of these target figures were men or boys. Some were women or girls.  And many held fire arms or knives, while others carried groceries, a camera or some other innocuous item.

I was quite used to these targets, having used them myself when in various schools, or other training, to learn selective shooting techniques.  And, I knew that the trick to succeeding against an array of these targets -- erected by someone who was trying to trick you into shooting "innocent" targets, in order to train you NOT to do so in the future -- was to concentrate on the target's hands.

If the target holds a weapon, you shoot it.  If not, you can't, because that person (unless identified by uniform or in some other manner) is a non-combatant; so hold your fire.


The soldiers in this Host Nation, however, had a different practice.

They didn't care that they shot men holding little boy's hands.  They shot the little boys too!

If the man was holding a little girl's hand, however, the girl was not to be shot.  Just the man beside her.

So, too, did the female wielding a shotgun go without injury.  But, the man holding groceries (his target standing beside the shotgun-wielding female) was filled with holes.

It was unbelievable.  But it happened.


That evening, in our team hooch, my Team Leader (a captain rather new to SF) looked at me and said, "Sergeant Hill, you're scheduled to teach the class about the Law of Land Warfare.  Your class has to address this issue!  These guys are in an army that's getting ready to do a lot of work for the U.N., and other international peace keeping organizations, and they're going to get into firefights going where they're going.  You've got to make it clear that they can't kill innocent civilians: they're going to wind up committing war crimes if you don't."

So, this is how I wound up teaching a class, in which I used a rather oddly chosen movie to carefully outline what made a person a "combatant" under the Law of Land Warfare.  And, I carefully explained that women could be combatants.  And that NOT ALL men were combatants.  And that they'd better be sure they weren't shooting innocent civilians, or they could be hung for committing a war crime.

Problem was:  These guys weren't paying any more attention than those Middle-Eastern officers had paid to that female Spec-4 I mentioned in that previous post.  Their culture told them that all men were legal targets, and all women were innocent.  They didn't know why I was confused about this, but clearly I was.

I hated to spoil their dream of all women being innocent, but . . .

Well, I'd prepared for this moment. 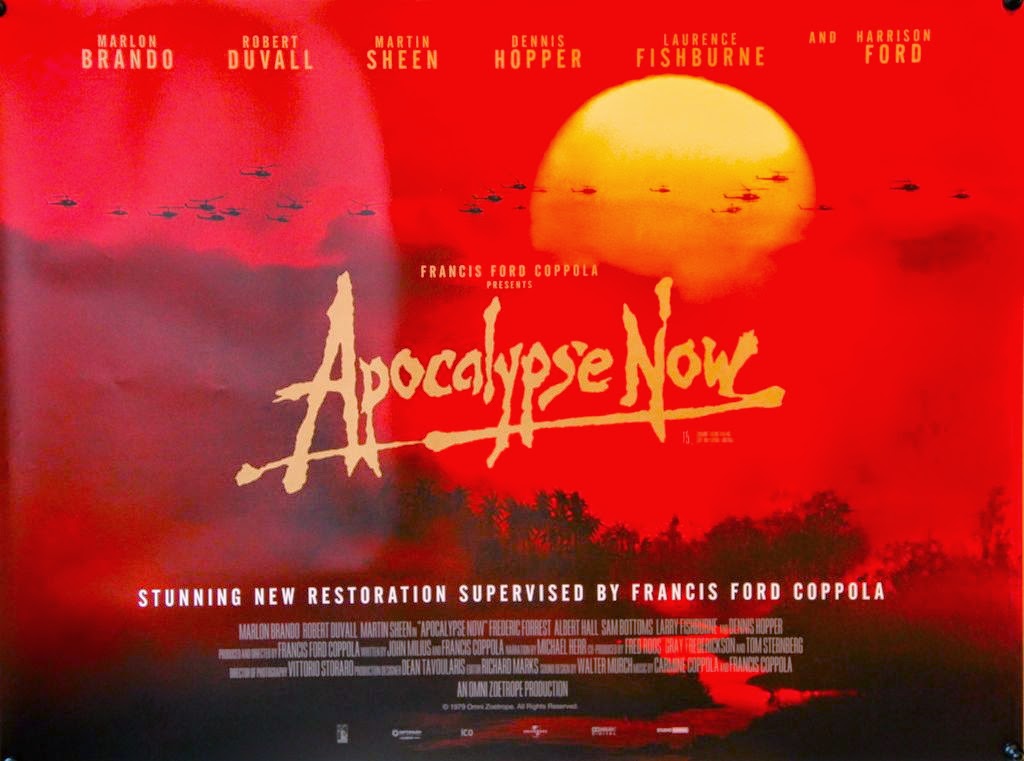 And now I decided it was time for a little shock treatment.  About a half-hour before class, I had put a TV set in the class room (which was outdoors; I had to run two 100-foot extension cords), along with a VCR.  I had the tape of Apocalypse Now all loaded, and had run it up to the point where the Air Cavalry attacks the Viet Cong village in a helicopter assault.  It was dark out, being night time.

So, I shut off the lights, and hit PLAY.

I had pre-set the tape so that we started right in the middle of the battle: VC anti-aircraft batteries firing at the choppers, choppers machine-gunning rifle-wielding VC and firing rockets into the anti-aircraft sites.  The students leaned forward, excited. 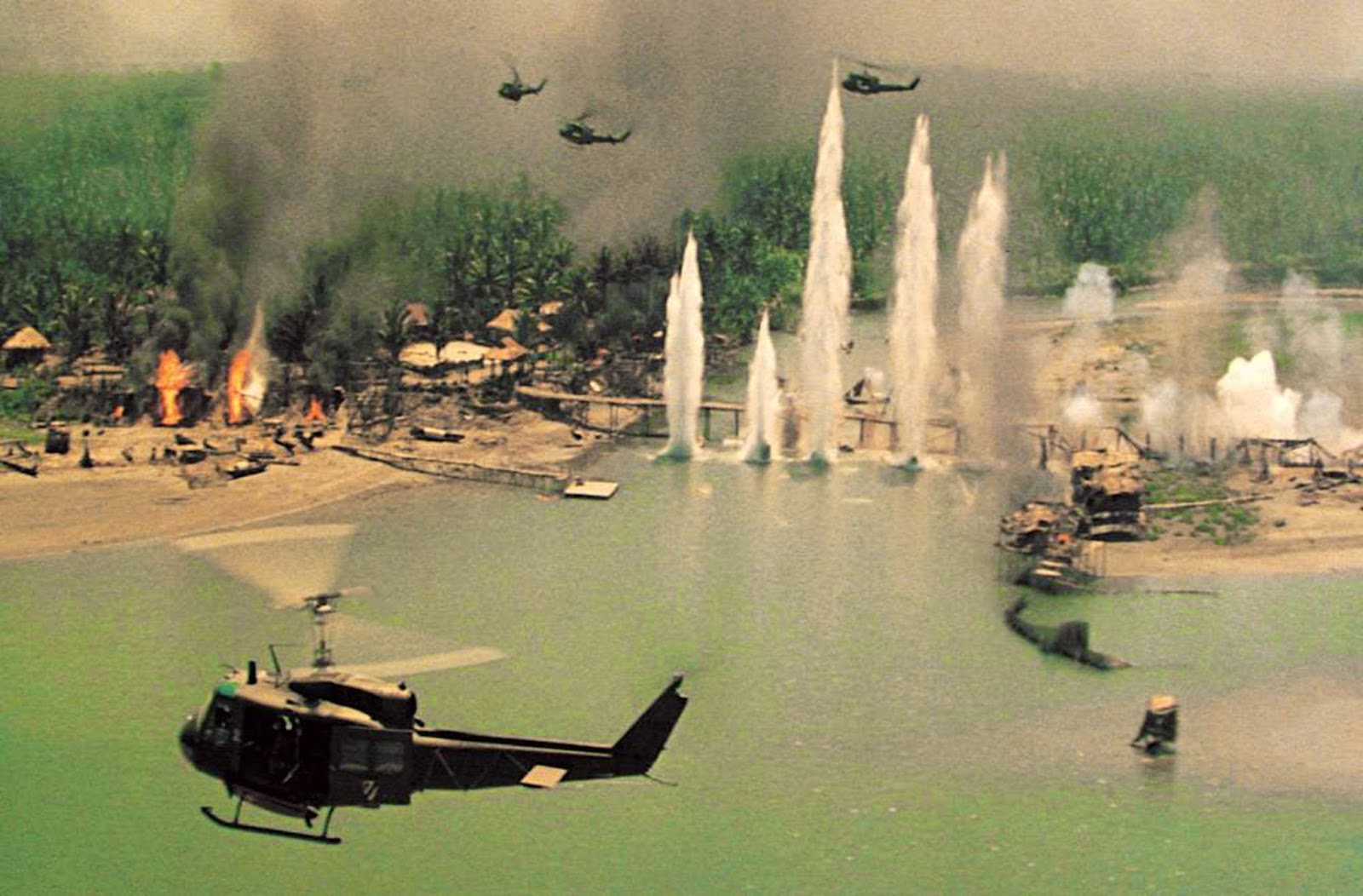 I stood back and used a pointer, tapping it on the TV screen, pointing to the weapons certain VC characters carried, saying: "Weapon!  Combatant! -- LEGAL TARGET!" each time.  Or, I might point out "Uniform!  Combatant! LEGAL TARGET!"

My pointer tapped the anti-aircraft crew gathered around their weapon: "Combatants, or not?" I bellowed above the movie soundtrack.

"Combatants, sir!" came the mass reply.  This went on for some time.

Then . . .
we came to the scene where the Viet Cong female throws a conical hat into the helicopter parked on the ground.  The chopper explodes, because her hat hid a grenade.  The students cried out, shocked.

A second or two later, I tapped the end of my pointer against the woman's running figure as she scrambled across the screen, away from the carnage.

"Combatant, or not?" I called.

They stared at me, silent, blinking, heads swiveling between me, my pointer and the figure on the screen.

Before I could get an answer, she was gunned down from a helicopter above.

My students gasped.  They clasped their hands over their mouths.  Some of them rocked back and forth in horror and confusion, where they sat on the split-log benches.  Their horror was nearly palpable.

So was their confusion.

And, frankly, this was the moment I'd been waiting for.

I froze the picture on the image of the man who had used the machine gun to shoot down that woman.  (I think it was Robert Duvall, as LTC Kilgore, but I can't find a copy of this particular scene online for some reason.)  Slapping my pointer on his image, I snapped, "Is this man going to be tried and hung by an international court of law for war crimes?  Or is he safe from such charges?  Was that woman he killed a combatant, or not?  If she was a combatant, he's safe.  If she wasn't --- He . . . will . . . be . . . HANGED!"

Not an eye in that classroom wandered for the next two hours, until my class was over.  For many days afterward, students would quietly approach other members of my A-Team, suggesting scenarios and asking if so-and-so would be a combatant or not.  From what I heard, many of these questions centered around actions performed by women during combat.  As one of my team members said to me: "What the hell did you tell these guys?  They're all scared s--tless of being hung for war crimes, or else being shot by some chick!"