Me and Elvis Presley

While searching my brain for something to write about I read a note posted on FB about a couple of comics doing Elvis Impersonations. I watched first Jim Carey, then Andy Kaufman and both were good and funny. Andy's even more so because his normal talking voice was so high-pitched and strange, but when he sang and spoke "Elvis," he somehow got down into that low register that was more along the lines of the voice of Elvis. 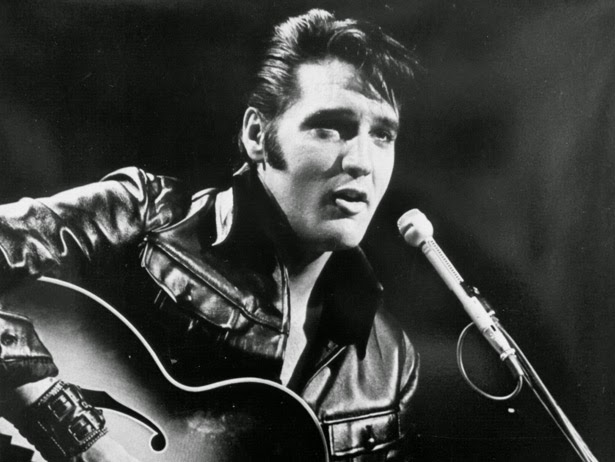 That plus an incident which happened a couple weeks back, while listening to live music, someone requested one of the singers to sing an Elvis song. These musicians don't often sing cover songs but if requested and someone can do a version and the tip is reasonable then someone will try. The song was "Blue Suede Shoes." I immediately was reminded of my first and only time I saw Elvis in person.

It was in 1955, in Lubbock Texas and Elvis was traveling with The Louisiana Hayride. I was sixteen years old, a senior in high school and was not especially a big Elvis fan. I had heard of him, everyone in my part of TX had heard of the Rockabilly Kid. You all realize, of course, this was a few months before the "Ed Sullivan Show," and a few months before this young singer from Tupelo, MS and Memphis, TN became 'THE KING."

I don't remember the other girls I went with to Lubbock. Been too many years. I do remember we had seats rather far back in the auditorium. I think the premise back then was first in line got to rush down to the front rows. And if I'm not mistaken the tickets cost something like $2.50 There were other entertainers on the show but we came to see Elvis.

The bad thing for me, I broke my glasses that day. One of the lenses popped out and I only had that one pair of glasses. I remember looking through and being able to see really well with my right eye and everything kinda blurry with my left eye. And part of the time I covered my left eye and just looked with my right eye so I didn't have that blurry spot. I remember being upset over breaking my glasses. Such a bum deal to go to a concert and you can't see very well.

The news had gone around the country that when this Elvis guy sang that girls screamed and some swooned. My mother told me that it was like that when Frank Sinatra first started singing. Girls screamed to the top of their lungs, "Ohhhh Frankie," and some girls fainted. I thought the whole idea was one of the silliest things I'd ever heard. Screaming over some guy up on stage singing a song and I swore that I was not going to scream. And I didn't.

You believe that don't you? Honestly, I didn't scream at first, but after a little while, I discovered myself screaming, too. A whole coliseum full of mostly young teenage girls yelling and screaming is contagious. At first, I thought I was crazy, but then I realized it was mob hysteria. You know when the crowd outside the jail want the sheriff to send the prisoner out so the crowd can string him up. The whole town is yelling and shouting and carrying on and getting bolder and louder. Then when the good guy sheriff stands up to the crowd and fires his gun in the air that shuts up the menfolk and he tells them to get on back home. The crown quietens down, looks at each other sheepishly and leaves. That's mob hysteria. But we didn't look at each other sheepishly, we just looked at each other and screamed some more.

When Elvis came out on stage and the initial screaming quieted down to a dull roar, he said, something along these lines, "I'm going to sing a song written by a really good friend of mine. A good friend for many years." Then he turned to his lead guitar player and asked "What was that fellow's name?" "Carl Perkins," said the guitar man. "Oh yeah, Carl Perkins," said Elvis and he started singing "Blue Suede Shoes."

I'm not totally sure what else he sang, seems like he said That's All Right, Mama and Jailhouse Rock but I wouldn't swear to it. It was fun and I had a good time but I never became a huge, big Elvis fan. Not exactly sure why. I liked most of his songs, but I liked Johnny Cash, Conway Twitty and Hank Williams Sr better. Maybe because they seemed real to me and Elvis didn't.

Years later, we moved to Memphis, TN. It was 1972 and Elvis was living in Memphis at Graceland. My late husband, Elmer built Germantown Mall while we lived there. One of the stores in the mall was a wonderful jewelry store, owned by two brothers. One brother, Lowell, ran a store in downtown Memphis and the other brother, Les, ran the store in the mall. Elvis was friendly with Lowell but Les was the artist jeweler.

So Elvis came out to the Germantown store, after the mall was closed, fairly often to buy jewelry for his playmate of the month. However, Les could never tell anyone when he was going to come out because if he told and fans came out, the store would lose his business. Les couldn't even tell his wife. By then I would have enjoyed meeting Elvis because he was a big star and I just thought it would be cool to meet him and shake his hand and tell him I had seen him back in Lubbock all those years ago. But it never happened. Never got to meet him.

Les did tell us that he could always tell how serious he was about a woman by the jewelry he bought. The $10,000 to $30,000 was just an okay lady and the $40,000 and up range was a special woman. Les designed the TCB pins that Elvis gave to his band and male pals meaning ‘Taking Care of Business’ and the TLC pins given to female pals that meant ‘Tender Loving Care’. Les designed most of the jewelry Elvis wore.

One of those rumors that went around our high school was that Elvis had played at a dance hall in Lubbock called the Cotton Club. And the story went that a young lady with cantaloupe sized bazooms came up next to the stage, wearing her little tank top and asked Elvis to autograph her body. Supposedly he wrote Elvis on the right one and Presley on the left one, but I wouldn't ask Polifacts to check it because that most likely was one of those urban legends.

Even though we lived in Memphis when Elvis died and for a few years afterwards, I never visited Graceland. However, our Grape Family Reunion will be in Memphis this summer and I've joined in the family group to visit the home of the King. May he RIP.
Posted by Jan Grape at 00:01

I have friends who might enjoy this. Thanks, Jan.

Jan, thanks for a trip back in time. I'm a few years younger than you, but I saw Elvis here in Columbia, SC. My dad loved country music, and we went to every performance that came to Columbia. Elvis was the opening act for Johnny Cash before the King's career took off, and that was how I saw him. Growing up, I was an Elvis fan, but not a fanatic. I did, however, have an aunt who collected any and everything even remotely related to Elvis. I still think of her anytime I see a little plate or piece of black velvet with Elvis sneering off it.

Jan, I just want to add that I like the new author photo.

I didn't get to see Elvis until his last tour, a few months before his death. I wish I'd seen him in 1955, instead.

I never was an Elvis fan - just missed the age-range, I suppose - but I remember the Beatles hysteria clearly. And a couple of decades later, I made the mistake of taking a friend's 12 year old daughter to a teen heart-throb's concert - I'd forgotten how loudly tweens could SQUEAL.

Most folks I know like Elvis's music, especially since he was born here in Mississippi. The guy did have an amazing range, with his voice.

I've never been to Graceland but an aunt who lived in Memphis swore she saw him several times, and said he once sat beside her on his motorcycle at a stoplight. She said she told him, through her lowered car window, that she loved his songs and he smiled a crooked grin and gave her that deep "Thankyaverymuch."

According to the reports I've heard, he's probably been sighted more times since his death than before it.


I was stationed in Japan in the army when I first heard him sing. Not being a big R&R fan, (it was the new sound at that time), I was surprised to realize that I was favorably impressed by "Heartbreak Hotel". In spite of the hip swinging, gyrating personality he was noted for, he was a true talent.
Not a bad actor either, but I have to admit I paid more attention to his costar, Ann Margret.

My Mom's cousin saw him at the Oklahoma State Fair in the '50's just before he became a big star. She snuck backstage and met him and said he was just this nice kid (who flirted with her!) As for Graceland, when my Brother visited there with his family and the staff found that his young brother-in-law was recovering from cancer they gave him a nice guided tour of some of the places the tourists usually don't see!

Thanks for all the Elvis stories y'all reported, I've been either busy or gone for most of the day so haven't had a chance to respond. But I do appreciate hearing from each.

Thanks for the comment on the photo Fran, I like it fairly well. I seldom ever like my photos. I never look in them like the vision in my head. You know younger, slimmer looking me. ;)