The Cell Phone as Murder Weapon 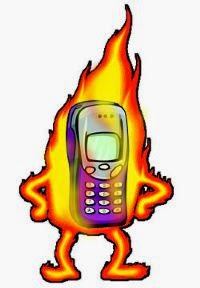 Melodie Campbell's post on December 6th gave me the idea for this post, so if you don't like it complain to her.  Because it's her fault!  (Just kidding of course.)

Surely everyone has read about cell phones being used to detonate improvised explosives, but I'm not going to address that issue in this post.  Clearly, too many bad guys already know how to set up such triggers, and -- though I think I have a pretty good idea how to rig one up -- I am not going to propagate such knowledge among more of them.

There is an aspect about cell phones, however, that some mystery writers may be unaware of, which could potentially render them highly useful as items involved in fictional extortion plots, arson plots, and even potential murder plots.

I don't feel I'm letting anything out of the bag by writing this, because:

The aspect of cell phones that I'm addressing is:  Exploding Batteries.

Now, you may have just scoffed, and asked, "How much damage could one little battery do?"
Below is a photo of a house reportedly gutted by the fire an exploding cell phone battery started: Is there any question in your mind, now, that a cell phone battery could figure prominently in the plot of a mystery concerning arson?

These two photos show folks who have survived phone battery explosions or fires: 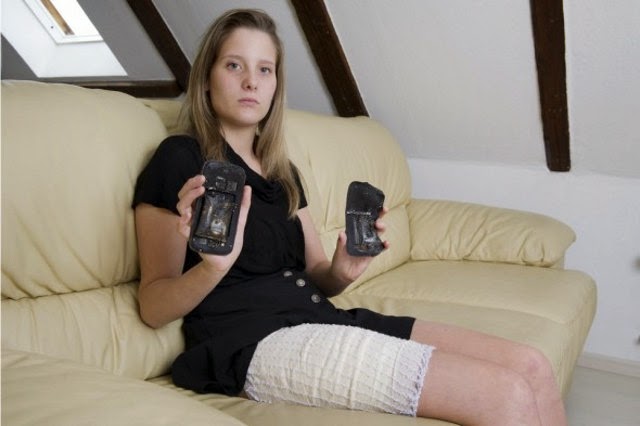 I recall being told of a case, in which terrorists set up a booby trap, which fired a small explosive device mounted behind the mirror on a car's sun visor.  The daughter of a man, whom the terrorists were trying to influence, owned the car and often used the flip-down mirror (which had lights on either side, that came on when it was flipped open) to do her makeup.  The idea behind the attack, was not to kill the daughter, but to maim her.  To mar her face.


This is a horrible thing to do to someone, but since we write about horrible people perpetrating crimes, consider:  Imagine how organized crime members might use a cell battery to carry out their threat to maim family members of someone they were trying to extort into doing something illegal.

What if the explosion that hurt the man's ear, in the photo above, were amped-up to be more powerful?  The target gets a call, and when he answer it -- WHAM!  Of course, the device would probably be more effective if the battery detonated five to ten seconds after the target answered, increasing the likelihood that the phone was tucked tight to the target's head (Charge-to-target contact -- remember?).  Now, we could be talking about fictional murder.

CLICK HERE for Times of India information about "call bombing" and how this might help a cell phone to cause damage.  Scroll down to "How and why do mobile phone blasts happen?" for the requisite information.

Now: Let's be frank.  If you've read through some of the links above, then you know that most phones and batteries are well designed and manufactured, and very seldom explode.  Further, even if a battery were to explode, I think it would be quite difficult to rig up a system that would make it explode at a specific time -- which is an important consideration when working with explosive or assassination devices.  After all, if the thing blows up when it's nowhere near the targeted individual or structure, the blast will not accomplish the desired results.

On the other hand, we're writing fiction here.  So . . . maybe -- using the links above, and possibly others -- you might figure out a way to sell such an exciting plot, in a way that's convincing to readers.  If so, I hope you "Have at it!"