In the realm of teen music, nothing is sacred. It began with the DJ-as-artist movement. Once upon a time disc jockeys with an entertaining line of patter were fêted: Wolfman Jack, Casey Kasem, and America’s television DJ, Dick Clark. Some might suggest that as consumer music became less creative, DJs became more so. They ruled their club kingdom and, for a few hours each night, they became stars.

DJs began to ‘remix’, then ‘scratch’, laying down alternate tracks, overlaying dance rhythms like dubstep, adding percussion, reverb, echo, sampling, hip-hop lyrics, and autotune. Some remixes became B-sides of the originals. Remixes were seldom improvements over the underlying works, but they proved popular.

Kids emulate their heroes. They download bootleg copies of FL-Studio, a powerful program to create music, but also remix beyond the recognizable. Confined to garages and high school dances, there isn’t anything overtly criminal, not counting the illegality of purloined programs and pirated music.

But kids learn one thing, to take someone else’s work and make it their own.

Imagine such activity in the literary world. An aspiring author combines plots from Rob Lopresti and John Floyd, then sets it in Stephen Ross’ New Zealand. They borrow a lingerie-challenged character from Fran Rizer and crib entire pages of humour from Melodie Campbell. Because they can’t grok the tradecraft details from Dixon Hill and RT Lawton, they copy them verbatim.

They call that work their own, no credit given. They win acclaim, they win awards, they win movie rights.

When caught and challenged, they not only claim everyone does it, they insist Rob, John, Stephen, Fran, Melodie, Dixon, and RT nobbled their ideas from others.

One of our readers pointed out this is happening in Germany and, instead of being punished, the young authoress is being honored. Seventeen-year-old Helene Hegemann filched phrases and pages from others including passages from the novel Strobo by pseudonymous author ‘Airen’. Helene says everybody does it, that’s what kids do these days. She calls it ‘mixing’, not plagiarism. She has her defenders, including the finalists committee for the $20,000 prize at the Leipzig Book Fair.

Readers might remember famed romance writer Cassie Edwards, author of a hundred novels which resulted in ten million copies sold. Ms Edwards, noted for her research, lifted paragraphs, passages, and poems from the non-fiction material of others and offered no attribution. Romance reviewers ‘Smart Bitches’ ripped her throat out, ruining an otherwise envious career.

Defenders of new age appropriation point out Cassie Edwards was a different generation, that those were the dark ages of six years ago.

Returning to the music comparison, I suppose one might argue the anthem America the Beautiful was the result of a remix. A third party combined the poetry of Katharine Lee Bates with the melody separately composed by Samuel A. Ward and arrived at a composition greater than the sum of its parts. The difference is that the ‘remixer’ neither claimed credit for the work nor pretended to wield a talent greater than the original authors. 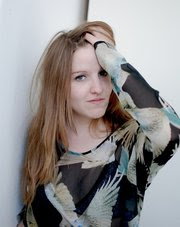 If there was one statement that caused me to entirely lose respect and sympathy for Helene Hegemann, it was this jaw-dropping, in-your-face sentence: “There’s no such thing as originality anyway, just authenticity.”

I kept returning to her words, trying to forgive by asking what the hell does she know at seventeen? Other than residing in a moral vacuum, of course. I take pride in creativity and originality and my colleagues do as well, chosen for those very qualities.

But this is my unoriginal opinion. What is yours?
Posted by Leigh Lundin at 00:00