by Dixon Hill
The Monday before Thanksgiving, a very special piano was auctioned off at Bonhams in New York.
Yes, this is primarily supposed to be a mystery writing web site, but sometimes inanimate objects are central to mystery plots.  Small, odd little objects may sometimes even point a detective to perceive the complex Rube Goldberg device behind a locked-room mystery.

Pianos also fit here in SS, I believe, because we have authors here who are just as passionate about their music as they are about their writing.  This auctioned piano combines mystery, adventure and music -- along with love.  In fact, it played a central role in all four at one time.  A seminal role, one might say. Which is perhaps not abnormal for certain inanimate objects.

This is the small, 58-key upright piano, probably made in 1927, that a production company altered slightly in 1942, by relocating some hinges, so that the character Rick Blaine could hide letters of transit inside.

That's right.  It's the piano that drummer Dooley Wilson, playing "Sam," sat at when Ingrid Bergman, as "Ilsa Lund," told him, "Play it, Sam.  Play, 'As Time Goes By,'" in the movie Casablanca.


How central can an inanimate object really be to the heart of a film, or the plot of a novel?

Well, let's look at just a few of the roles this piano (and its brother) played in Casablanca. 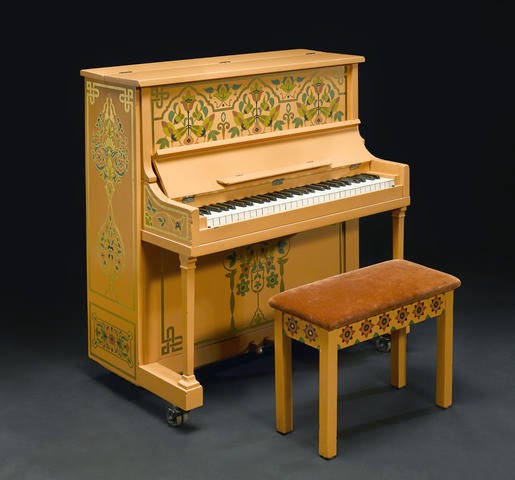 I have no idea who bought it, though I've searched the web.

You can click on this New York Times article here for more details.

Mystery lovers might also like to know that a certain Maltese Falcon has the honor of having grossed more at auction, than any other movie prop, reportedly landing  $4,085,000.00 during Bonham's TCM auction last year. (This statistic should not be confused with the "overall record for a piece of movie memorabilia," which goes to the Aston Martin [$4.6 M] driven by Sean Connery's "Bond" in Gold Finger.)