Okay, so I fudged a bit on the math by rounding up for the title, but it's close enough for government work. Anyway, my point is that three of the eleven stories published in the January/February 2015 issue of Alfred Hitchcock Mystery Magazine were written by members of the SleuthSayers blog. That's a nice percentage, and one of these days, the way we're all going, it may get even higher. 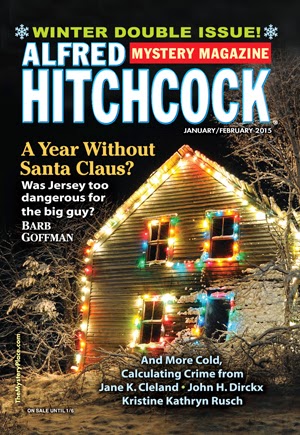 Eve Fisher leads off this winter double issue with her story, "The Headless Horseman." How would you like to live in a small town where you were known by your nickname of The Headless Horseman, or even Headless for short? Clarence, a young man who lives two blocks away from the young female protagonist, is stuck with that nickname because of an earlier incident with the  protagonist. In time, the young girl believes Headless is involved in some not-so-nice activities, so she shadows him around town and starts collecting information about anything he does. Headless soon notices that he's being followed and tries to discourage her. This all comes to a head when the girl walks in on Headless standing beside the freshly dead body of a woman he worked with at a local restaurant. Headless must now decide what to do about the girl. It's another excellent story set in small town South Dakota.

For "The Irish Boy," Janice Law continues the adventures of Nip Tompkins, the orphan boy who works for Madame Selina, one of the city's most famous mediums. Madame allegedly has the services of Aurelius, an old Roman emperor, to assist her in answering people's questions or in finding people or lost objects. In this episode, the brother of one of Nip's female friends has gone missing. Madame locates the missing brother in another town where he has joined a rough crew of Irishmen who are about to cross the river on a dangerous and violent mission into Canada. The problem soon becomes how to convince both the girl's brother and the Irish crew he has become a part of that he shouldn't cross the river on this mission. Are Madame and Aurelius up to the situation and if so, how can they do it? Read the story and find the outcome. As for me, I can scarce wait for the next episode of Madame Selina and Nip.

The third contributor is...well...me, with "Elder Brother," the second story in my Shan Army series set in the Golden Triangle of Southeast Asia. [NOTE: The editor of AHMM has already purchased the third story, "On the Edge," so this is officially a series, plus Rob Lopresti recently critiqued the fourth story, "Merit Making," which is now on it's way to the e-submission slush pile.
In this series, two half-brothers constantly jockey to be first in line to inherit the title of opium warlord upon the demise of their mutual Chinese father. The elder brother, Kang, is the offspring of a hill woman of the Shan tribe. Kang has grown up in the savage jungles of East Burma, while the younger brother is full-blood Chinese educated in the private British schools of civilized Hong Kong. At this point, a White Nationalist soldier under the command of our protagonist (the younger brother) has been kidnapped by some of Elder Brother's men from the Shan Army. This kidnapped soldier knows secrets that younger brother would prefer to be kept quiet. A squad of picked men is quickly formed to go on a rescue mission. But, in the deadly wilderness of the Golden Triangle, anything can happen.

Have some Happy Holidays, enjoy your reading and I'll see you in a couple of weeks.