The Age of Stone Surgery

I recently experienced kidney stone surgery. I say this calmly, rationally, as if kidney stones weren't nature’s way of reducing all of us to the level of bawling babies incapacitated with pain.

Literature on the subject appears to have been written by sociopaths who’ve never experienced kidney stones. Take for example this sentence, “Some flank discomfort can be anticipated.” That’s like Germans telling the British during the London Blitz, “Expect a little noise and dust.”

You may have noticed roughly half the human race features external plumbing. Normally, I’m satisfied with this arrangement, but at times like these, not so much.

Now knowledgeable in three techniques, I recognized a need for a bit more depth of the subject matter. Following is my tutorial on the topic.

A kidney stone forms as a crystal, the small ones the size of basketballs. Stones can have many shapes, all of them jagged. One might look like a claw from hell or another might resemble a spiked iron ball from days of yore. Note the wide variety at right.

This is not accidental. Let us step through the history of stone surgery, beginning with a prehistoric account.

Ogg and his common-law wife, Uma, lived in the fruitful plains of nowhere important. Ogg had been a good provider, but recently, he’d experienced horrible, sharp pains in his lower back that felt like he’d been clobbered by a stegosaurus tail.

Sometimes the hurt grew so excruciating, he passed out, once with his chin in a patty of dinosaur dung. These painful episodes made Ogg very cranky, much to Uma’s annoyance.

He figured this was nature’s way of telling him to slow down. Ogg decided to turn his attention to the arts.

Uma was a delicate flower, relatively speaking with curvaceous 136~124~136 proportions. Ogg decided to honor his beloved by carving a life-size statue, which ironically weighed about the same as Uma with comparable warmth.

He took up his stone chisel and began chipping away where Uma said it made her butt look big. Abruptly, pain struck. Ogg writhed, saying “Ook-ah, ook-ah,” which roughly translated means “@$*#%€! Holy crap this hurts.”

Uma, who’d give birth to triplets, Gog, Magog, and Agog, didn’t have patience with Ogg’s whinging and whining. She rolled her eyes and muttered about men acting like babies.

But something inside Ogg shifted. Wracked with blinding pain in the throes of the seizure, he inadvertently chipped off a feature of his wife’s sculpture she much prized. Infuriated, she picked up Ogg’s granite club and bashed him solidly on the brow, which not only removed his mind from the pain, but toppled him backward onto his sharp stone chisel.

Out popped a jagged, spiked sphere the size of a megalosaurus testicle. Such were often used as balls in caveman soccer, a very challenging game, especially while still attached to the megalosaurus.

“Oof,” said Ogg, with gratitude and relief. He picked up the spiked ball, hefted it, and muttered, “WTF?” which translates to “What the heck?”

Ogg instantly saw the possibilities and attached a chain to the stone ball and that to a heavy stick, creating the morning-star flail and inventing the phrase ‘my ball and chain.’ Now free of pain and armed with a dangerous weapon, he prowled the plains wiping out woolly mammoths and evangelizing the practice of neolithic stone chisel surgery, now part of urology health care plans everywhere. 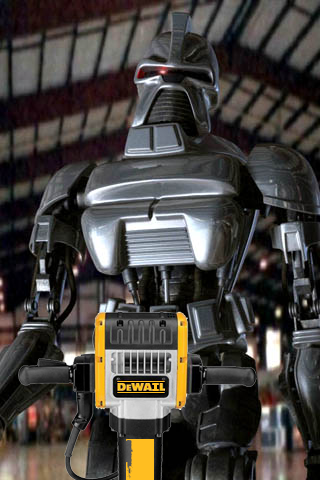 The next advance in technology moved from stone chisel surgery to deploying a piston that could physically batter stones into smaller pieces the size of baseballs. In practice, a hairy man in a hardhat and full body armor passes a full-sized jackhammer up the urethra where he chips away while humming Sixteen Tons, entertaining the patient and staff. That’s “patient and staff” as opposed to the “patient’s staff,” which is unlikely to ever work again and forever be a source of agony.

Bible school students learn the rousing spiritual ‘Joshua Fit the Battle of Jericho’ and the accompanying story, which is considerably more bloodthirsty in the details. (“Listen, Josh, are you sure He said wipe out every man, woman, child, bunny rabbit, puppy and kitten? And babies? And Achan’s family too? You joshing, man?”)

The Israelites marched seven times around the walls, shouted and sang like Yoko Ono, blew their ram’s horn trumpets, and the walls came tumbling down. In urology terms, this is called extra-corporeal shock wave lithotripsy.

That’s how ultrasonic works: You make lots of noise until its volume and frequency crumbles the hard stuff inside your kidney or the building next door. In theory. Some stones it doesn’t work on and it can sure as hell leave your insides bruised and littered like the arena of a demolition derby.

Sometime during the Middle Ages, Spanish Inquisitors stumbled upon non-invasive (so to speak) techniques where stones could be tackled by traveling up the ureter. The invention is credited to Bernardo Extirpator XXVIII, a hard-of-hearing and none-too-bright torturer, immortalized by the famous words of his cringing boss as Torquemada lost his cookies. “Pie-hole! Sweet Jesus in Heaven, I said pie-hole!”

One of the conventional techniques has traditionally been ureteroscopy. The procedure is commonly called ‘basketing’ in which doctors playfully insert into the urethra a xistera, similar to the racquet used to serve 180mph pelota balls in the game of jai alai, except the medical device is about the size of an ordinary laundry basket. This doesn’t give the procedure its name, but afterwards the screaming patient is carried out in a basket. 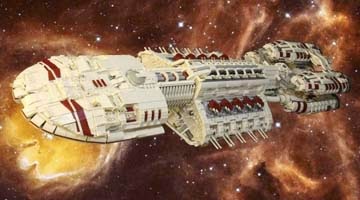 Basket extraction fell out of favor with the advent of Star Wars technology. A ureteroscope, a long, thin peeping device the size of a 37-inch television is sent up the ureter to determine where the stones set up camp. Once located, surgeons call in the big gun, a holmium laser-blasting weapon affectionately called Battlestar Galactica. It vaporizes the stone and the rest of a patient’s resolve not to scream like a 3-year-old.

Note ureteroscopic lasering is not the same as ureteroscopic tasering, invented by Bubba Joe Hadcock when he sat on his newly acquired stun gun. It was subsequently discovered, thanks to his invention, Bubba Joe didn’t have nor ever will have kidney stones. Nor kidneys for that matter. A simple solution to a complex problem.

In its simplest form, the patient’s body is amputated to stop the pain and a replacement grown. Medical technicians cryogenically freeze a patient whilst a clone is fabricated. Conversely for advance planners, a clone may be prepared beforehand and itself cryogenically preserved.

In an in-patient, minimally invasive procedure, the encephalon is transferred in toto to the brain-case of the new host. Patients have been known to immediately resume texting, shopping, complaining about The View, and other normal activities.

“Out-patient,” I thought they said but it was “Out-of-your-freaking-mind-patient,” talking about the stent removal. See, at the time of stone removal, they put in a piece of tubing like 3-inch industrial wiring conduit. In the wretched days after blasting the kidney stone, a stent allows pieces to pass through. Sometimes medics issue patients strainers in case the spleen or forgotten medical instruments fall out.

So Dr. Steven Brooks and Nurse Wendy corner me in a room where I hold them at bay with an impromptu lion-tamer chair. It's a swivel chair with spastic casters that would make any self-respecting lion roar with laughter, but my crazed appearance gives them pause.

Dr. Steven Brooks and Nurse Wendy tell me 99% of tough, be-all-you-can-be men opt for out-patient removal of the stent and only a wussy 1% choose being knocked out for hospital removal. Psychology is at work here: As the army knows full well, at the root of male bravery is fear, fear of showing fear. Otherwise, 99% would sensibly choose to be knocked out and wake up the following month fully healed. 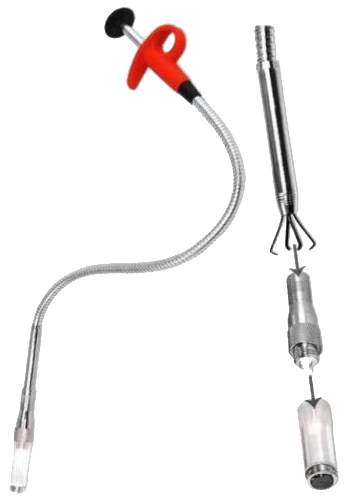 So I say okay and put down my improvised lion-tamer chair with its twitching casters. I eye a previously laid-out, sadistic device that looks like an automotive parts retrieval tool, a flexible shaft with a spring loaded handle at one end and a three-prong claw at the other. Silly me, I look at this thing and naïvely wonder how it will slide up.

I say naïvely, because I didn’t realize they would insert yet a terrifyingly larger tube sized to accommodate not merely our automotive parts extractor but a full-grown ferret. I look at the diameters and realize someone hasn’t done the math. A shop vac hose can’t possibly fit up an opening the size of a soda straw, and if it could, no one would ever again sip from that straw.

Afterwards, I asked them to just let me lie there a couple of weeks to recuperate as I write these last few words and my will and testament. I hope this technical dissertation helps my fellow layman and laywoman. Meanwhile, my bladder’s shrunk to the size of a pea… Whoops! Wrong word. Gotta go!
Posted by Leigh Lundin at 00:00