by Leigh Lundin
A couple of incidences have caused me to connect again with my first published story, ‘Swamped’.

For one thing, I caught an alligator. Over my dock spreads a marvelous shade tree. I enjoy meals there watching the animals and the birds– herons, anhingas (snake birds), ducks and egrets. An amazing delegation of white pelicans visited, first combing the lake in a straight line and then moving into the canal, tightly bunched, fishing as a coordinated group. Not long ago, a fish eagle, an osprey plunged into the water a few feet from me, carrying off a bream for lunch.

I flip scraps to the fish, especially the minnows, although bigger fish and turtles pull themselves up to the table. Recently, an uninvited visitor began showing up whenever I stepped out on the dock.

It was an alligator, a juvenile a little less than four feet long. A couple of people suggested my neighbor was feeding gators and others said teens flipped them food near the bridge. Someone obviously was feeding the beast because it not only showed no fear, it arrived with a dinner napkin.

Floridians are instructed never to feed gators because they come to associate people with food. An alligator fifteen inches long might seem cute, but when it’s fifteen feet and hungry, that’s another matter. Pets and people have been killed by gators that lost their instinctive fear of humans. Unchallenged backyard gators could cause bigger problems later.

The alligator continued to visit and aggressively shouldered aside turtles to get close to the pier. On Mother’s Day, I carried lunch out to the dock and there he lounged, serviette tucked under his chin ready to celebrate.

Setting down my tray, I picked up a rope. I lassoed the guy and pulled him out of the water despite unpleasant protests and naughty words about my ancestry.

For those who haven’t had the pleasure of handling alligators, one has to be careful of both ends– the powerful jaws are only half the story. The tail is armored muscle, part whip, part club. In or out of the water, a twist of the tail can roll a gator faster than a person can move. The claws can be nasty too, so one has to act with certainty.


A guy who should have known better.

With the help of the lasso, I grabbed him behind the shoulders, letting him thrash his tail until he tired. Opening a large trash can, I lowered Fuzzy inside. I poured in a couple of litres of water so he wouldn’t dehydrate and phoned Wildlife Services.

Actually, I called Animal Control first, the cat and dog people. They said, “You got a what? Really? On purpose? What’s it’s name?”

“Fuzzy,” I said. Apparently their forms have a slot that require a pet’s name.

“Really? How big is he?” she said. “Does he bite? We don’t handle alligators. You’ve got to call Wildlife Services.”

So I phoned Wildlife Services. To my surprise, they sent an earnest, very competent officer on Mother’s Day to pick up Fuzzy. He taped Fuzzy’s mouth shut, which muffled the cursing. He seated Fuzzy in the back of his truck. I like to think Fuzzy is basking in the sun in a secluded marsh with lots of girlie gators to flirt with.

And then… and then about a week later, TWO of Fuzzy’s siblings showed up for breakfast. I’d like to say they wore fedoras and shoulder holsters, but they were about the same size as Fuzzy, a little over a metre long. I spotted a five-footer cruising the middle of the canal although it ignored the local hospitality. He could have been smoking a ‘see-gar’ like Pogo’s Albert. I’m certain I’m in an alligator reality show.

If you think Fuzzy might have been a scary creature…

When I wrote the story ‘Swamped’, I worried readers might not think the mad judge was realistic. He was based on an actual Orange County judge whose bizarre behavior made the news. The incidences of citing people in a diner for contempt and ordering a cop who stopped the judge for DUI to appear before him in court truly happened. Throughout, the powers that be seemed powerless to stop him.

Although that situation proved weirder than most, other judges have slipped the rails including one who harangued jurors and threatened them with jail. Often other judges will set matters right after the fact, but it shouldn’t have to be that way. With a state as punitive as Florida, who wants to take chances?

Now another central Florida judge has lost it, swearing at and slugging a lawyer. I hear some of you applauding the judge for pummeling the lawyer, doing what most of us want to do at one time or another, but remember virtually all judges are lawyers. Anyone other than a judge would be arrested for punching and verbally abusing any citizen. But in Florida, at least, judges act as if they're immune from such mundane concerns, merely cajoled to seek treatment for 'anger management'. Ironically, the defendant was in court for assault charges.

I doubt the applause in the courtroom will get defendants very far.


A judge who should have known better. 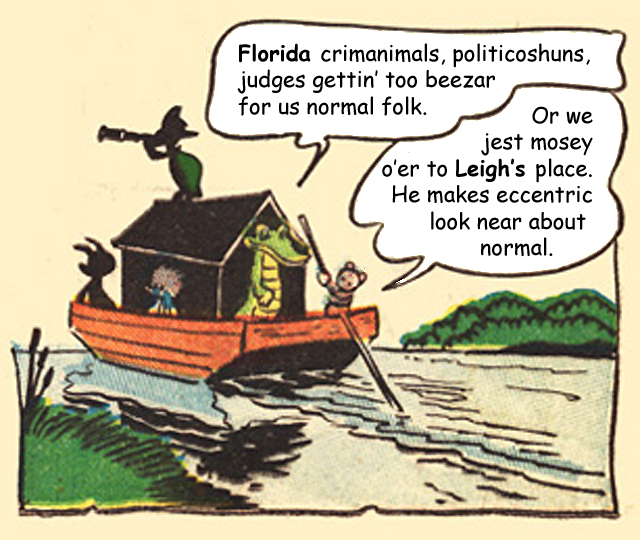