The first week in June, The Prisoner of the Riviera won a Lambda award for best gay mystery, a very pleasant surprise that has gotten me thinking about proper fictional subjects and about the way that what’s considered suitable is altered over time. Although any writer worth her salt believes implicitly– if not explicitly– in the Muse, that tricky little goddess is not immune to changes in opportunity or fashion. 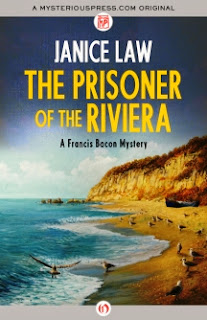 I doubt very much that she would have offered me Francis Bacon as a good bet when I first started out in the 1970’s, even if the Anglo-Irish painter had been racking up the multi-million dollar sales that now benefit his heirs and fancy galleries. One only has to read Raymond Chandler, whom I otherwise much admire, to see how homophobic and bigoted his Philip Marlowe was. I suspect that Francis, breezy and witty and quite upfront about his recreations, would have been a tough sell.

My Muse, however, did have a wayward streak, and she initially suggested that my Anna Peters – one, I think, of the very first female working class sleuths– be a woman with children. Fortunately, she didn’t push that idea. Although commonplace today, in the late 70’s the world was no more ready for a woman investigator with children than Conan Doyle’s audience was for the Tale of the Giant Sumatra Rat. Anna emerged in print shorn of family and remained childless through nine adventures.

Times change. Certain topics are no longer off limits for women writers. Pat Barker has written gripping novels about World War One and the idea that nice women don’t write about sex has now been dead for at least a generation. During the same time, however, other divisions emerged. Older readers will still remember the uproar that The Confessions of Nat Turner aroused, because Styron was a white novelist writing about a black historical figure. Like attacks on male novelists like Norman Mailer who were seen as misogynistic, the controversy over The Confessions was an attempt by a marginalized group to control, or at least to influence, the way it was being depicted.

With the emergence of best selling authors from a variety of hitherto ignored groups, image control is perhaps a less pressing concern, but it does linger around the fringes of literary life. Who gets to draw the pictures? Who gets to present The Other, whatever that other might be, and how neatly can– or should– any society pigeonhole its writers?

These are questions properly for philosophers and political thinkers. The writer is a different beast altogether and should, I submit, properly stake as much territory as she can get away with. And create as diverse a set of characters as the Muse allows.

So why Francis? Why now?

One, practical concern: historical characters as detectives are currently popular. OK. Once in a while it is good to pay attention to fashion. Two, he started talking to me. Did I ignore him at first? You bet. Did I really want to research gay life in London after the Second World War? Not particularly. Was I enchanted with his work? Not really, although I thought– and still think– it very original and a quite brilliant example of a painter making even his weaknesses work for him. Did I find his sexual habits, not his orientation but his masochistic propensities, intriguing? I did not.

And yet, when you come right down to it, even a man as promiscuous as Bacon, even one as fond of drink and gambling and rough trade spent most of his time in less exotic pursuits. He worked hard and he was a strict critic of his own work. Alas that he destroyed much of his early work, for what survives is immensely interesting, and he slashed inadequate canvases both early and late. He lived with his old nanny and read the crime news to her when her sight started to go. And she, despite incipient blindness, went shop-lifting for them when they were broke.

He had friends, a number of them women, and patrons and artistic enemies. He made acquaintance with the notorious Kray Brothers and dabbled in an underground gambling venture and took holidays in the sun with his respectable lover.

In short, he was a man in full, a complicated human being, and as such he escapes the neat pigeonholes that society favors– and relies on. So, why Francis Bacon?