Secrets of the Girl Sleuth

A few weeks ago for the Ellery Queen Mystery Magazine web site, I wrote about the secret author of the Hardy Boys and the Stratemeyer Syndicate. Last week, I picked up the theme with Nancy Drew, again for Ellery Queen. In preparation for the article, I came across mildly scandalous and salacious background notes. Warning: Adult themes ahead.

It seems to be a rule that Wikipedia and certain fan sites of well-known fictional characters carry a few (or many) paragraphs about implied homoerotic relationships: Sherlock Holmes and Watson, Nero Wolfe and Archie, Spenser and Hawk, Alex Cross and Sampson, and… the Hardy Boys. Some fans will inevitably read more than ‘bromance’ into such friendships, but it’s especially creepy in the case of the Hardys, who are brothers.

Nancy Drew’s not immune from such speculation. She hung out with Bess and George. It didn’t help that her friend ‘George’ was actually Georgia, wore short hair and was described as “an athletic tomboy” even though she dated at least two boys, Buck Rodman and later Burt Eddleton. But these implications were minor blips on the radar. Nancy may have had a more… sensual side. 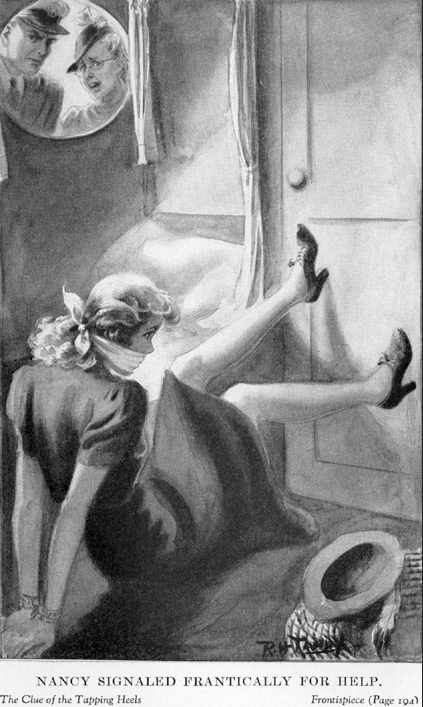 In reading the first two novels in the Nancy Drew series (The Secret of the Old Clock and The Hidden Staircase, both published in 1930 and revised by Harriet Stratemeyer in 1959), I dipped into other articles. I noted in passing a comment a fan wrote that she blamed (or credited?) her passion for bondage on the young sleuth, noting that poor Nancy was constantly being tied up by one evildoer or another.

As I researched, I realized the remark about bondage wasn’t merely a comment in passing, but that several readers associated Nancy Drew with ropes and chains. Some said they didn’t recognize the feelings that infused them until becoming adults, but a few admitted an odd awareness back in their childhood. This isn’t a small aberration; readers can find fan fiction and art web sites on-line with these themes.

At least one fan took matters a step farther. In Becoming Nancy Drew, artist Laurie Long physically transformed herself into the girl sleuth. She dyed her hair Nancy’s titian blonde, and for two years lived and worked as the girl detective, recreating scenes from the Nancy Drew novels, and writing a book in the process.

For any writer, the risk of releasing a story means the characters become a possession of the public, and the public will have its way with them.

The Nancy Drew novels proved immensely popular, but books 8, 9, and 10 enjoyed a surge of popularity. Readers had no idea ‘Carolyn Keene’ was a pen name, a property of the Stratemeyer Syndicate, and a change of authorship had occurred.

As mentioned in the Something is Going to Happen article, Mildred Augustine Wirt Benson wrote twenty-two of the first twenty-five Nancy Drew books, but she did not write numbers 8, 9, or 10. Those three were written by another author in the Stratemeyer stable who’d written other series books. They were written by a military man.

Within the Syndicate, that wasn’t unusual: Women authors wrote under male pseudonyms and vice versa. To be sure, #26 and #34 were also written by men, but readers reacted to something special and indefinable in numbers 8 through 10. The author here was a naval officer, historian, journalist, script-writer and novelist, Walter Karig. Besides stories under his own name, Karig wrote a total of nine books for the Stratemeyer Syndicate. His Password to Larkspur Lane became the first Nancy Drew movie, Nancy Drew: Detective in 1938.

Walter Karig might have continued to write Nancy Drew stories, but he made a mistake. The circumstances aren’t entirely clear but in 1935, Walter Karig revealed to the Library of Congress he’d written three of the Nancy Drew novels. Although this didn’t make the press, the revelation aroused the ire of the Syndicate who threatened legal action against him. As popular and brilliant as his work had been, Karig never again worked for the Stratemeyer Syndicate and Mildred Benson once more picked up her pen.

In digging into the Stratemeyer novels, I discovered that a lot, perhaps the majority, involved orphaned little heroes and heroines or at least motherless children. Thinking about it, I realized that much of children’s literature involves motherless children: Harry Potter, Tarzan, Dorothy of Oz, Little Orphan Annie, Pinocchio, Mowgli, Huck Finn, Scout Finch, Oliver Twist and the Artful Dodger's pals, David Copperfield, Philip ‘Pip’ Pirrip, Peter Pan and all the Lost Boys… and that’s not delving into fairy tales– Cinderella, Sleeping Beauty, and so on.

A simple answer is that no mother would let these kids take on dangerous adventures as portrayed in the stories. But I suspect there’s something more, something deeper. Are young readers supposed to feel fortunate they still have parents? Or are authors toying with vicarious wish fulfillment? I haven’t come upon a satisfactory explanation.

Oddly, some articles blame Disney, but a quick glance at the list above demonstrates the phenomenon long preceded Bambi, Simba, Ariel, Belle, Princess Jasmine, and so on. The Disney brothers simply continued what had long existed.

So what’s the solution to this mystery? Help Nancy Drew solve it with your thoughts.