A blizzard strands a group of strangers in an isolated railway depot during an Indian uprising. Two cowboys known only as "Wash" and "Chance," make it into the depot one step ahead of a Cheyenne war party. Night falls and two more people join the party trapped in the depot: a bounty hunter and the Cheyenne brave he's intent on turning in for a reward. Before dawn someone is murdered...

That's the thumbnail of "Counting Coup" a short story of mine that ran in the November, 2006 issue of Alfred Hitchcock's Mystery Magazine. Although it was not my first paying story, I consider it my first professional fiction sale (my books written and published up to that point were all non-fiction).

The story is, first and foremost, an homage to the classic western films I cut my teeth on growing up. It features timeless tropes to be found in films from John Ford's The Searchers to High Noon to Stagecoach to My Darling Clementine. (It's no accident that three of these four examples were directed by John Ford).

But it really all started with Millard Mitchell.

I can hear you thinking it now: "Who?"

Millard Mitchell was a Hollywood character actor probably most famous for playing movie mogul R.F. Simpson in Singin' in the Rain.

What does a mystery short story set in 1873 Montana have to do with a basset-hound-faced Hollywood character actor you likely never heard of?

Here's the connection: Millard Mitchell co-starred in many films beginning in the 1930s and running until his death from lung cancer in 1953 at age 50. Many of these films were westerns. 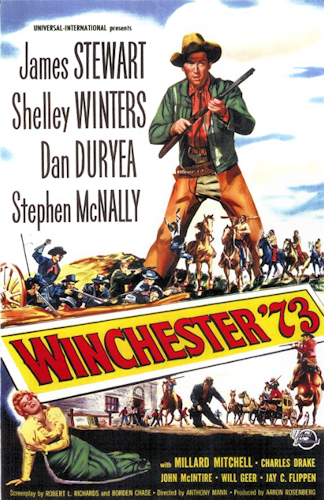 Winchester '73 did what many successful westerns of the era did: it took a razor-thin plot premise and surrounded it with first-rate acting talent who sold the ridiculous plot point (A man chases down his brother, ostensibly because that brother, now an outlaw, stole his prized Winchester rifle, but in reality because said brother murdered their father in cold blood). Shirley Booth co-starred, and the supporting cast included such rock-solid character actors as the scene-stealing Dan Duryea, Will Geer and John McIntyre. Incidentally the film also featured newcomers Rock Hudson (and go figure, he had his shirt off for most of his scenes) and Tony Curtis in a memorable role as a greenhorn cavalryman.
Millard Mitchell was also a castmember, playing "High Spade" Frankie Wilson, Stewart's side-kick and trail companion in his quest to track down his murdering coyote of a brother. He does a credible job, working with what's given him, and proving a wonderfully droll foil for Stewart's dour character ("Lin McAdam").

Now here's the funny thing: Mitchell is credited as "High Spade" Frankie Wilson, and at one point in
the film introduces himself using that exact moniker, nick-name and all. And yet throughout the film, Stewart continually addresses him as "Wash."

No explanation, no drawing attention to it. I've always figured that Anthony Mann had his reasons for writing it into the script, and left it at that.

One night a couple of years before I submitted "Counting Coup" to AHMM I was watching Winchester '73 (and not for the first time), and was struck by the timelessness of the image of two men, trusted companions, on some sort of quest. And that called to mind The Searchers, which in turn got me thinking about John Wayne, and the onward my thoughts ran to my favorite of Wayne's films: Rio Bravo. More on that below.

Working on the theme of two cowboys riding into town/camp, etc., I began to put together the story that eventually took shape as "Counting Coup," deciding to make it the homage listed above. And what better way to do so than to name the two cowboys in question after two of my favorite characters in a couple of my favorite classic westerns?

That's how Wash, the elder/mentor cowboy in my story, got his name. In the course of the action it is revealed that "Wash" is short for "Washburne," although I never mentioned whether that's a first or a last name.

My younger cowboy got a full name, lifted from the protagonist of my favorite John Wayne movie: Sheriff John T. Chance, in Rio Bravo, although he's simply called "Chance" for most of my story.

Where Winchester '73 is serious, even grim, Rio Bravo is just fun. John Wayne sort of standing down a powerful cattle baron bent on sparing his no-good brother from a well-deserved hanging is how the plot reads, but the film really is about friendship. So Wayne pals around with Dean Martin and Walter Brennan for most of it, even serving as the straight man for wonderfully droll love interest Angie Dickinson, playing, what else? A sexpot with a checkered past, coming through town on the stage.


Which led me in turn to the central idea behind another Wayne movie, the one that saved his budding film career, 1939's Stagecoach. Several very different people from all walks of life, pinned down in a desert stage depot by Geronimo and his Apaches....the circumstances diverge there, and my story wound up very different, with a murder in the middle of the night, followed by an early morning solution, and just like that, the whole story just sort of crystalized for me.

All I had left to do was write it.

How about the rest of you (especially my fellow Sleuthsayers!): got a story laying out how you came up with one of your pieces? Let's hear it!

Posted by DoolinDalton at 04:05