Now as the train bears west,
Its rhythm rocks the earth,
And from my Pullman berth
I stare into the night
While others take their rest.
Bridges of iron lace,
A suddenness of trees,
A lap of mountain mist
All cross my line of sight,
Then a bleak wasted place,
And a lake below my knees.
Full on my neck I feel
The straining at a curve;
My muscles move with steel,
I wake in every nerve.
I watch a beacon swing
From dark to blazing bright;
We thunder through ravines
And gullies washed with light.
Beyond the mountain pass
Mist deepens on the pane;
We rush into a train
That rattles double glass.
Wheels shake the roadbed stone,
The pistons jerk and shove,
I stay up half the night
To see the land I love.

On a Thursday morning in early October Ellery Queen was grappling with more fundamental concerns. The cross-country flight west to Los Angeles had been bumpy, particularly over the Rockies, and he had been bone-weary when the cab deposited him . . . . [H]is sleep had been fitful, and by morning he had still found himself more than a little disoriented in time, thick of tongue, and feeling every bit of his seventy years. Mr. Queen lamented the loss of the leisurely cross-country Pullman trips of yore and grumbled, not for the first time, how flying so unforgivably takes the travel out of travel. 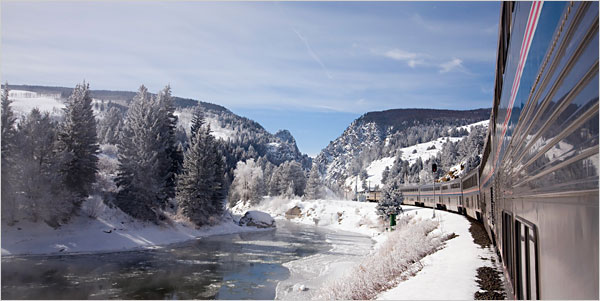 What is it about a train that lends itself to narrative fiction and, particularly, to mysteries? The question is open to some debate, but to my mind there are several aspects to train travel that can be irresistible to those of us who tell stories.  First, a passenger on a train is both a part of the world, and yet apart from it, traveling in a defined slice of life that is removed from everything else.  Second, time passes relatively slowly on a train -- there are opportunities to move about, to have contact with others over drinks or in a dining car, where seating is luck of the draw and we never know who may be across from us at the table. Jimmy Buffett said something about sailing that is equally true of riding the rails -- “fast enough to get there, slow enough to see: moderation seems to be the key.” Unlike airplane travel, where the terrain passes by miles below us, on a train we witness every mile, yet we are apart from each of those miles, encapsulated in a microcosm world. There is an undeniable romance to this.  Third, the train contains its characters, almost like a locked room. The cast is all there, rolling on the rails and quarantined from the every-day world, which can only be observed as it glides by.

Little wonder that train travel has provided a recurring locale for narrative writing. Agatha Christie’s Murder on the Orient Express is a prime example of a mystery built and dependent upon the structure of train travel. And it only seemed right that Ian Fleming used the constrained setting of a train as the locale for much of the narrative in From Russia, With Love, the fifth James Bond novel. Fleming drew much of his description of that particular train
-- the same Orient Express that captivated Christie -- from his own wartime journeys on the fabled train.

The same lure of the rails lies at the heart of Hitchcock’s 1938 classic The Lady Vanishes, which was, in turn, based on the 1936 novel The Wheel Spins by Ethel Lina White.  And Hitchock returned to the rails with North by Northwest.  More recently Sara Gruen’s best seller Water for Elephants relies as much on the train as it does on the circus for its setting, and the 2008 movie Transsiberian is not only a mystery and thriller, but a grand homage to the Trans Siberian Express.

So there are lots of stories that take place on a train. But what about fiction that is written on a train?

In an interesting little plot twist, Amtrak has taken an initial proactive step toward fostering an even more symbiotic relationship between narrative writing and train travel. Recently the company unveiled its new (and admittedly fledgling) “Residency for Writers.” The program envisions offering selected writers round-trip accommodations on various Amtrak long distance routes as inspirations for writing. In the words of Amtrak “[e]ach writer's round-trip journey will include accommodations on board a sleeper car equipped with a bed, a desk and outlets. We hope this experience will inspire creativity and most importantly fuel your sense of adventure.”

The genesis of the Amtrak Residency Program was described as follows in the on-line magazine The Wire:

After New York City-based writer Jessica Gross took the first "test-run" residency, traveling from NYC to Chicago and back, Amtrak confirmed that it is indeed planning to turn the writers' residencies into an established, long-term program, sending writers on trains throughout its network of routes.

Jessica Gross described her trip, and the allure of writing on a train, during the course of her interview in The Wire:

All told, it sounds like a truly exquisite experience. Gross later detailed her trip in The Paris Review: "I’m only here for the journey. Soon after I get to Chicago, I’ll board a train and come right back to New York: thirty-nine hours in transit—forty-four, with delays. And I’m here to write."

What, exactly, is the appeal of writing on a train? In a phone interview with The Wire, Gross described the train ride as a "unique environment for creative thought," one that "takes you out of normal life." She won't find much disagreement. Now more writers (The Wire's staff included) are clamoring for their own Amtrak residency.

“I’ve seen a billion tweets from other writers saying ‘I want one of these’,” Gross said, probably being a tad hyperbolic, but it's true that once Amtrak actually does start offering writers' residencies regularly, they're going to be very popular. Julia Quinn, social media director for Amtrak, tells The Wire that there has been "overwhelming demand" from people interested in the program – part of the reason the company is intent on turning this into a regular operation.

Unfortunately not all of the press generated by the program has been as glowing as the story from The Wire. The Washington Post on March 13 served up a grousing review of the project that basically argues that Amtrak is publicly funded, already expensive, and shouldn't be giving away anything for free -- even to writers. The author of the piece, Post writer Dan Zak, attacks the modest Amtrak Writers’ Residency not by criticizing the program itself, but by attacking Amtrak for offering it.

Amtrak’s 400-plus-mile routes [Zak snivels] posted an operating deficit of $614 million in 2012, while its shorter routes (like those between the District and New York) had only a $47 million surplus, according to a 2013 Brookings Institution report. And yet ridership more than doubled between 1997 and 2012. Amtrak, birthed by a government bailout of the country’s privately operated rail network, is a publicly funded for profit entity.

“Math,” Zak ponderously concludes, is “the antidote to romance.”

An aside here (as I struggle through ten deep breaths):  For the last five years I have taught a graduate course at the University of Denver on the development and regulation of transportation in the United States. I could (and do) go on and on about the bum deal that Amtrak has received over the years. But that course, not SleuthSayers, is the better venue for such a monologue. Suffice it to say that every passenger service everywhere in the world is, to some extent, government subsidized. The U.S. government built highways for cars and trucks. The government built airports for airlines and gave them air traffic control. The government built ports for ships. And every country that has taken the next step in train transportation, and invested in high speed rail, has done so with a commitment of governmental funds.  The amount the federal government currently spends to subsidize Amtrak operations is a drop in a bucket.  The amount pales when compared to the outlay in government funds expended to support other modes of transportation.  I could go on, believe me. But the simple answer to the cabined “do the math” squawks of Mr. Zak (who you can just about bet has never read Theodore Roethke and certainly is no fan) is simply that math has nothing to do with it. Certainly it is not an "antidote" for romance.  (And by the way -- who in their right mind wants an antidote for romance?)

Amtrak's ridership has set new records in something like 8 of the last 10 years.  Many Amtrak runs, including long distance runs, operate near or at 100% capacity; that is, the only reason more riders (and more revenue) is not secured is because of the limited number of cars available to Amtrak (a fact that does derive from Mr. Zak's mathematical penchant).  It seems to me the answer to a viable national rail network is the same as the whispered promise in the baseball epic Field of Dreams: If you build it, they will come.

If you are more poet than mathematician, well, take a look. Applications can easily be submitted to Amtrak on-line.

Applications will be accepted on a rolling basis and reviewed by a panel. Up to 24 writers will be selected for the program starting March 17, 2014 through March 31, 2015. A passion for writing and an aspiration to travel with Amtrak for inspiration are the sole criteria for selection. Both emerging and established writers will be considered.

Residencies will be anywhere from 2-5 days, with exceptions for special projects.