Like many writers, I enjoy wordplay of almost any kind: rhymes, puzzles, riddles, puns, etc. And Fran's mention the other day of Lynne Truss and her wonderful Eats, Shoots and Leaves made me remember something that I haven't thought about in some time.

I'm one of those people who like clever titles for books, stories, and movies. Examples: Let's Hear It for the Deaf Man, Burglars Can't Be Choosers, A Hearse of a Different Color, The Scoreless Thai, The Sidelong Glances of a Pigeon Kicker. My alltime favorite is probably Apocalypse Pretty Soon. I also like titles that were so mysterious I didn't even know what they meant until later in the story, like Rain Man, Catch-22, The Green Mile, The Prince of Tides, Cool Hand Luke, The Dead Zone, and Dances With Wolves. 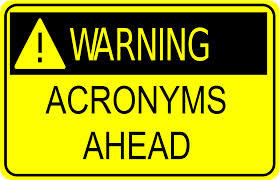 Sometimes those you'll-find-out-what-it-means-later titles are acronyms--words that are formed by the initial letters or groups of letters in a phrase, like SCUBA or RADAR or NATO--and that can make the effect even better. Everyone knows by now what M.A.S.H and S.W.A.T. stand for, but when I went to see the movies Wall-E, F.I.S.T, TRON, and RED, I didn't have a clue that they referred to Waste Allocation Load Lifter Earth-class, Federated InterState Truckers, The Real-time Operating system Nucleus, and Retired, Extremely Dangerous. (Oh, and I didn't mention C.H.U.D., which translates to Cannabalistic Humanoid Underground Dweller.) 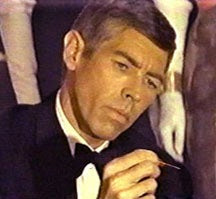 Acronyms within titles, or within the stories themselves, can also be interesting. One of the first that ever caught my attention--I thought it was cool, because as a little kid I thought Napoleon Solo was cool--was the one for United Network Command for Law and Enforcement. And the villains that the man From U.N.C.L.E. fought were employed by an equally wordy outfit: T.H.R.U.S.H., the Technical Hierarchy for the Removal of Undesirables and the Subjugation of Humanity. Other spooky organizations in that era were Bond's old enemy SPECTRE (the SPecial Executive for Counter-intelligence, Terrorism, Revenge, and Extortion); Matt Helm's company, I.C.E. (Intelligence and Counter-Espionage); and our man Derek Flint's employer, Z.O.W.I.E. (Zonal Organization for World Intelligence and Espionage). Since I'm already knee-deep in all this, I should probably also mention Marvel Comics' S.H.I.E.L.D., which has had several meanings over the years. (I won't burden you with them; just plug in words from those given above--you get the idea.) Not that it matters, but Maxwell Smart's boss (CONTROL) and his archenemy K.A.O.S. weren't smart enough to have expanded names and therefore were not acronyms at all.

My favorites, besides Z.O.W.I.E., are probably K.A.B.O.O.M., the Key Atomic Benefits Organization
Of Mankind, from one of the Naked Gun movies, and G.R.O.S.S., or Get Rid Of Slimy GirlS, from Calvin and Hobbes. Those preferences alone should give you a pretty good idea of my level of intelligence. 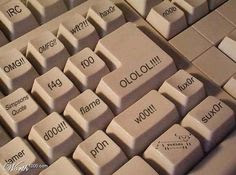 Goofy acronyms are of course not limited to TV shows, comic strips, spy novels, and movies. My two primary employers in my life have been IBM Corporation and the U.S. Air Force, and between them they have possibly generated more acronyms than the rest of the free world combined. My wife once said to me, after overhearing my end of a phone call with the computer guys at one of my IBM customers' locations, "Do any of you ever speak English?" Her question was understandable: the entire conversation had been full of words like VTAM, DB2, Oracle, UNIX, CICS, Domino, RAID, OS/MVS, etc. At one point I think we even discussed SPOOLing, which meant Simultaneous Peripheral Operations On-Line. As Stephanie Plum would say, Jeez Louise.

One of the IBM acronyms that I liked was the old ATM program COLTS, which stood for Consumer On-Line Transaction System. The software was developed in Baltimore, and was named for the then-Baltimore Colts football team. Oddly enough, a lot of financial institutions' customer-delivery programs over the years have had cute nicknames; one ATM system was called Harvey the Wall Banker. And I remember that when plans were being made for a teller automation system at the Nashville-based First American National Bank, some smartaleck suggested in a planning meeting that they name it First American Remote Teller. Fortunately, the "Remote" was changed to "Automated," and it became the FAAT system instead. Not exactly a snappy acronym, but certainly more acceptable.

No time for insurgents

As for military lingo, I watched In Harm's Way on DVD the other night, and John Wayne and crew were always talking about Sink-Pak, spelled CINCPAC (Commander-IN-Chief, U.S. PAcific Command, who turned out to be Henry Fonda), along with a dozen other examples of alphabet soup. More currently, and in real life, there's now some dude with the incredible title CDRUSPACOM (CommanDeR, U.S. PAcific COMmand). And of course there's always the most famous acronym of all, taught to us by shows like The West Wing and House of Cards: POTUS.

One personal story. When I was in the Air Force in the 1970s, I was at one time stationed at a support base with folks assigned mostly to two groups: Engineering and Installation. The prefix for all organizations at the base was EI, followed by another E or I depending on which side of the mission fence you were on, so all our departments began with the letters EIE or EII. I was on the engineering side, and one of my extra duties (most military personnel are saddled with "extra duty" designations) was Information Officer for the group. So, although it's more of an abbreviation than an acronym, one of my titles during this wild and crazy period in my life was--you guessed it--EIEIO. With a cluck-cluck here and a cluck-cluck there . . . The funniest two acronyms I remember from the Air Force were related to a person's duty station and his state of mind. You probably won't find it hard to believe that many servicemen (and women) were not always fond of their locations, and sometimes they requested orders to transfer out, or to leave the military entirely. When their requests had been granted, they were said to be FIGMO, and usually walked around with a laid-back, happy-go-lucky attitude, as in "Why's Joe smiling all the time?" "Oh, he's FIGMO." The acronym meant **** it, I've Got My Orders. Occasionally, though, these sent-from-heaven orders got cancelled, and when that happened, one moped around with slumped shoulders and a long face. In that case, the affected party was said to be OMGIF, which is FIGMO spelled backward: "Why's Lester dragging around, today?" "Haven't you heard? He's OMGIF." It meant Oh My God, I've been ****ed. Sometimes it's strange the things you remember, from forty years ago.

A story by any other name

In closing, I do realize that this is a mystery/suspense blog, and that I've strayed some distance off the written path, so I have a question. Do any of you Sayers of Sleuth recall a mystery/crime story or novel or movie whose title is an acronym? The only ones I could remember were S.W.A.T. and RED. And have any of you ever used an acronym in your titles? I can see how it'd be effective, but I've never done it.

Maybe I need to watch some more M.A.S.H. episodes.