The Man Who Sold the Papacy: Pope Benedict IX


by DoolinDalton
A few years back I wrote a couple of books about "bastards": (in)famous people with a mean streak- including some that many today continue to consider "heroes," or at least "good people"- admittedly many of these historical figures have overall positive public images, but in order to show that most everyone has a bit of the "bastard" in them, I included discussions of George Washington putting the moves on his best friend's wife, Jefferson siring children with one of his slaves, and so on.
More fun to write were the accounts we have of many historical personages who have all but disappeared from the pages of history, and getting the opportunity to lay out just exactly why these characters ought to still be considered "bastards" even today. This is one of those "neglected" personages. The account below is an expanded version of the one that ended up in The Book of Ancient Bastards, and lends more detail than I was given within the constraints of the book itself. I hope you enjoy it.
This entry and the one to follow both deal with medieval popes. One who put the throne of St. Peter up for auction, the other who put the corpse of his predecessor on trial. First, Benedict IX: the man who sold the Papacy.


This week’s bastard is another of those wacky medieval popes who so scandalized contemporary and
later church writers.  As was the case with one of our previous weekly bastards (Elagabalus), Pope Benedict IX came to his position very young (the sources disagree on this point, but he was definitely no older than twenty) because he was the scion of an extremely well-connected family.

As was the case with so many medieval popes (including our next bastard, Stephen VII ) before him, Benedict owed his position to the Roman aristocracy, which meant that most of his critics came from among the many German clergymen holding positions in the church.  Most of his opponents considered their reigning head of the church something of a bogeyman; perpetrator of “many vile adulteries and murders.”  Desiderius of Monte Cassino who was a contemporary of Benedict IX and later reigned as Pope Victor III, wrote that Benedict committed “rapes, murders, and other unspeakable acts.”  Benedict’s reign, wrote Desiderius, was “so vile, so foul, so execrable that I shudder to think of it.”

For his part Benedict doesn’t seem to have given a damn what his critics thought.  His power base was among the members of the Roman aristocracy, and as long as they backed him he felt free to do as he pleased.  Turned out he reckoned without the powerful (and fickle) Roman mob, who rioted in 1036 and ran Il Papa right out of the Eternal City.  The uprising was quickly put down and Benedict returned to power there, but his hold on his throne was tenuous at best after that.

By the time Benedict’s opponents within the church had succeeded in driving him from Rome a second time in 1045, Benedict had tired of being pope.  So he consulted his godfather, a well-respected priest named Johannes Gratianus (“John Gratian”) about whether he could legally resign this most holy of offices.  When the “Godfather” assured him that such a thing, although unprecedented, was wholly acceptable according to church doctrine, Benedict offered to sell it to him for a ridiculous sum that would apparently be used to fund the former pope’s “lifestyle change.” 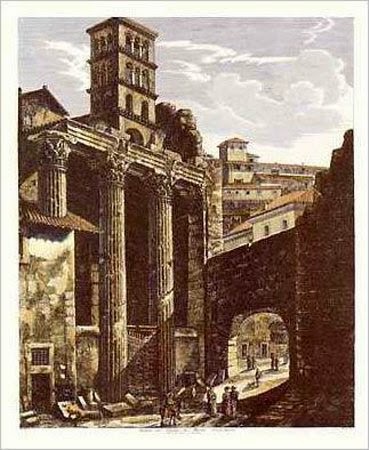 So technically Benedict left not one, but two popes (well, really a “pope” and a pretender, or “antipope”) behind in Rome when he retired to one of his country estates later that same year.
Benedict didn’t waste any time, immediately proposing to a cousin (a common custom in his day).  When she refused him the ex-pope got it into his head that it wasn’t such a bad thing being pope after all.  Within weeks he’d headed back to Rome trying to get his old job back.

He spent the remainder of his days as a monk in that abbey, dying there in 1065.

Repentant bastard.
Posted by DoolinDalton at 10:19