Life isn't always fair. You might be paying close attention, listening hard to every word the teacher's saying, but when Doofus Jones in the desk behind yours decides to smack you in the head with a spitball and you turn to him and make a rude and socially improper gesture, that's the one moment the teacher chooses to look in your direction. We all know that. It's the Night Watchman Syndrome: close your eyes for a two-minute nap and your supervisor always shows up to check on you. I think it was Johnny Carson who said that if life were fair, Elvis would be alive and all the impersonators would be dead.

But occasionally all your stars seem to line up, and good things happen. 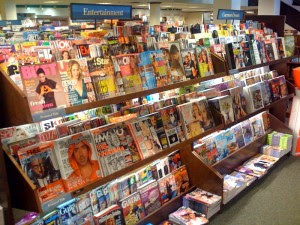 Last Sunday afternoon I drove into town to a chain bookstore, one that features a vast supply of magazines. As I was standing there at the rack reading a story in an issue of Asimov's, one of the bookstore staff saw me and came over to chat. (Like all writers, I try to meet and get to know the employees in local bookstores. Most of them have the job security of an assistant football coach, but while they're there they can be the best friends a writer can have, both during and between booksignings. They're also a lot of fun. How could you not like someone who chooses to work among all those books every day?)

A quick note: there's something about Blatant Self-Promotion that makes most of us uncomfortable. For an author, some measure of BSP is acceptable and even expected, and I realize that. But it still makes you feel like a combination of telemarketer, TV evangelist, insurance salesman, and Amway representative, so I avoid it whenever I can. Because of that reluctance, it's great to be presented now and then with an opportunity to showcase your writing without bringing it up yourself. It's the feeling a comedian probably gets when he's handed a straight line. The SP without the B.

What happened in my case was that the aforementioned store employee--Andrew--walked up and said to me, "Still writing a lot?"

"You write 'em, we'll sell 'em," he said, grinning. He pointed to the magazine in my hand. "Anything of yours in there?"

"Nope. I think you have to be smart to write science fiction."

Another grin. "You've had some stories in Alfred Hitchcock though, right?"

"I have one in the current issue," I answered, proudly nodding toward the May 2014 AHMM. "A couple of my writer friends are in there too."

Andrew looked at the cover, saw my name, and his eyes widened. "Awesome," he said. I saw him glance around idly at some of the other mystery magazines.

I kept quiet, hoping he'd notice the one in the next rack.

He didn't, so I helpfully told him that I have a story in the new issue of The Strand Magazine as well. Even more helpfully, I pointed to it.

I smiled (I hope) modestly. What I didn't bother to tell him--just an oversight, of course--was that it was the first time I'd EVER had my name on the covers of two big magazines at the same time. I also didn't tell him that I figured it would never happen again. Some things don't need to be mentioned, right?

"Hey, you're movin' up in the world," he said. He sounded impressed, so I made sure to keep my left side turned away from him; tucked under my left arm were three copies of that February-May 2014 issue of The Strand. Somehow I doubted that a real writer would drive twelve miles to town to buy extra copies of an issue containing his story, to give to his mother and sister.

Andrew and I made smalltalk for a while longer, then said our goodbyes and wished each other well. Afterward, cheapskate that I am, I went back to reading the Asimov's story, which turned out to be excellent. Most of them are.

These sci-fi writers might be smart, I remember thinking, but nobody could feel better than I was feeling at that moment. Everyone likes to be patted on the head, and my confidence had received a pleasant little jump-start. I had managed to brag without preaching, to self-promote without being too selfish, to feel important without acting important. At least I hoped I had.

Excuse me, ma'am--want to buy my book?

A few questions, here. How do you handle the tricky issue of author BSP? Nobody wants the two extremes: one is to sit there like a bullfrog and never contact or say anything to anyone, and the other is to act like the yammering salesman who pesters customers until they want to carve his tongue out with a dull knife. So what do you do? Seek the middle ground? Very few of us are lucky enough to attract fans and potential readers without expending some kind of marketing effort, and even fewer are comfortable crowing about our literary achievements from the rooftops. How little BSP is too little? How much is too much?

Last Sunday, I'm pleased to say, those troublesome questions and doubts didn't come up. In fact I decided to stick around and read another free Asimov's story before paying for my magazines and heading home.

Actually, I was hoping someone else might stop by to say hello . . .