Nine lives of the catalog

I seldom write here about being a librarian because I hate to brag, but  I recently attended a lecture that seems relevant to us as readers and writers.  Lori Robare of the University of Oregon spoke on "RDA for Non-Catalogers."

RDA is Resource Description and Analysis, a new set of rules for cataloging library material.  (And here I should hasten to say I was at that meeting because I am not a cataloger, so I may be about to get a lot wrong.  Don't blame Lori!)  Until RDA arrived in 2010 library books were cataloged under Anglo-American Catalog Rules (AACR2), which was (were?) created in the 1970s.

Now, think about what libraries were like back then.  The purpose of AACR2 was to cram as much relevant information about a book as possible onto a small card which would go into a cabinet and probably never be seen by anyone outside that library.

How many of the words in that last sentence are still true today?  "Relevant information" is probably about it.  You don't have to cram information into a card because today's catalogs consist of computer records which can be as long as necessary.  So RDA says forget about using abbreviations.  (And while we're at it, throw out Latin.  Few users understood it back in the seventies.)

And why assume you are cataloging a book?  Maybe you are trying to catalog a DVD, a software program, a website, or realia, which in my library could be a jigsaw puzzle, a figurine, or lord knows what else. 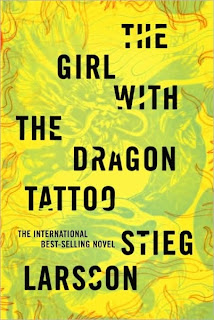 Of course, the fact that the catalog is on a computer means that readers -- and librarians -- all over the world can see it, as opposed to that hermetically sealed wooden case that existed in each individual library back in the seventies, so consistency suddenly becomes much more important.

It was in response to changes like this that catalogers decided not to keep revising AACR2, but to try a whole different approach: RDA, which uses a system called FRBR--

Okay, don't sweat it.  I'll make this easy.  Let's say you want to find a book: Stieg Larsson's The Girl With The Dragon Tattoo.  In FRBR that would be called the work.

So I hand you a copy of the work.  It is titled Män som hatar kvinnor, Men Who Hate Women.  Oh, you didn't want it in the original Swedish?  You would prefer English?  No problem!  But which translation do you prefer:  the English English or the American English?  In FRBR each of these versions is called an expression.  For another example of expressions, think of different recordings of the same song.

You've decided on the popular American translation.  Great!  Hardcover or paperback?  Maybe large-print?  By now you know FRBR has a name for this: it's the manifestation.

Good news!  The library has two copies of the version you want.  And in FRBR each of these is an item.

And somehow  the cataloger has to indicate in the catalog record the work, expression, manifestation and item under discussion.

Easy peasy, no?  What about the movie version of Larsson's book? Is that an expression or a different work?  How about an illustrated edition?  A graphic novel version?

And this brings me to the main reason I am inflicting all this on you.  Lori showed us a diagram made by Barbara Tillett who was, at that time, at the Library of Congress.  She attempted to capture on one page everything that can happen to one little piece of writing.  See if it doesn't blow your mind. 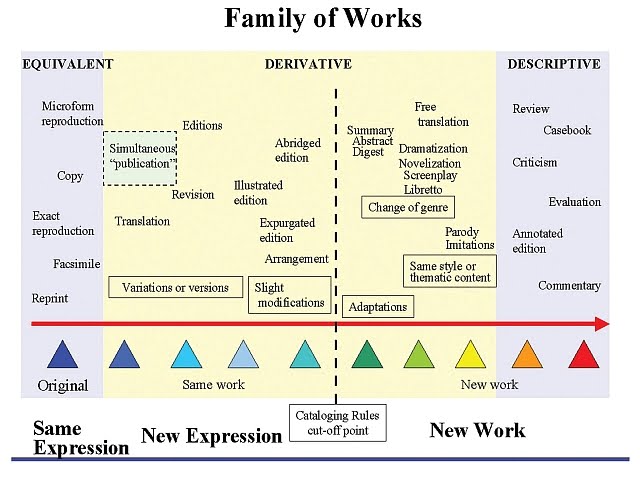 I suppose the only works that have most, much less all of the above, are a small number of  literary classics.  Something we can aspire to, anyway.
Posted by Robert Lopresti at 00:01