On June 6, 2013, I watched Stephen Colbert when Stephen King, John Mellencamp, and T-Bone Burnett appeared as guests.
Any one of these three being interviewed would interest me.  As we all know, Stephen King is a tremendously successful writer who also happens to be a favorite of mine.

John Mellencamp is a rock star, also a favorite of mine for more than just his best-known "Jack and Diane."  I was a Mellencamp fan back when he was a Cougar and I wasn't.


T-Bone Burnett has multiple musical credentials. He's a musician, song writer, and arranger, but his greatest achievements and awards have come from production of such people as Roy Orbison and Elvis Costello and producing  music for many films including O Brother, Where Art Thou?  He's won the Frederick Loewe Award for Film Composing, Golden Globe Awards, and many Grammy Awards.
Since their appearance on The Colbert Report, the three of them have appeared on multiple shows including Morning Joe, NPR's World Cafe, NPR's All Things Considered, SiriusXM's Outlaw Country, The Charlie Rose Show,and The Late Show with David Letterman--all during the month of June!  (Oh, John, don't we wish we had their publicist scheduling our signings!)

WHY ALL THIS?  Here's the answer: 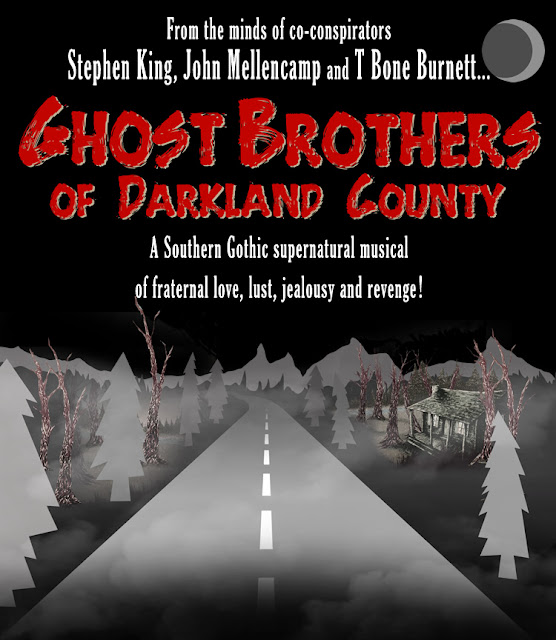 AEG Live has announced that the southern gothic, supernatural musical Ghost Brothers of Darkland County will be touring twenty cities throughout the Midwest and Southeast beginning October 10th in Bloomington, Indiana and ending November 6 in Grand Rapids, Michigan. Tickets are on sale at aeglive.com.

Ghost Brothers of Darkland County began when Mellencamp told King about a cabin on his land in Indiana where two brothers had gotten in a fight over a girl resulting in one brother killing the other. Only a few days later, the surviving brother was killed in a car accident. The girl was with him and died also.

Mellencamp shared this story over thirteen years ago.  King outlined a play about it. After that, they were off and on, back and forth, until they developed it into a full-length musical. 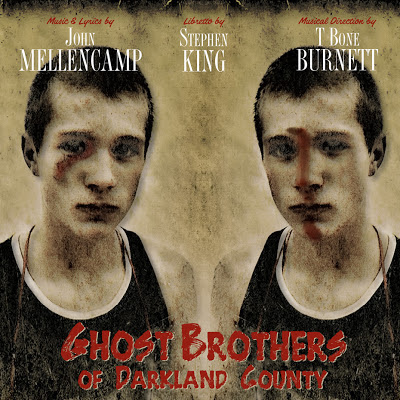 On advertising and the book covers, CD, and DVD covers, King, Mellencamp, and Burnett refer to themselves as "co-conspirators."


King wrote the story/play and made some significant changes from Mellencamp's tale.  It's about two sets of brothers, Jack and Andy, dead in an apparent murder/suicide, and their nephews Frank and Drake.
Joe, Frank and Drake's dad, and brother of Jack and Andy sees his sons headed in a downward spiral similar to their uncles.  He decides it's time to reveal his own terrible secret at the site of the tragedy before it's too late.

Mellencamp wrote the music.  Instead of the songs telling the story, they reflect the feelings of the characters.  The blues 'n roots music covers a wide range of styles, and it's masterly produced by T-Bone Burnett with many famous artists.

Multiple products are available--the musical and recordings and books. You can even win prizes from the Bloody Disgusting Contest.  Check the Internet for merchandise, tour info, and ticket information.  You can find it on any of the three co-conspirators' pages as well as Ghost Brothers of Darkland County's website.


A quote from Stephen King:

"John can make rock & roll records and I can write books for the rest of our lives, but that's the safe way to do it, and that's no way to live if you want to stay creative.  We were willing to be educated, and at our age, that's an accomplishment."

I think it's time to stray from the safe way.  I just sent the Christmas Callie to the publisher yesterday.  Tomorrow, I'm beginning a paranormal.
Posted by Fran Rizer at 00:01