It's funny how we get started reading new authors. For me it happens sometimes by chance but usually as the result of a recommendation by fellow readers or writers. And, more and more, I've begun seeking out books and stories written by my fellow SleuthSayers. However it comes to pass, it's always fun to discover new writers.

Cider House Rules author John Irving says, in his memoir My Movie Business, that one summer when he was a little boy at the beach, someone pointed to a pale, ungainly man in a yellow bathing suit and said it was Ogden Nash, the writer. "To this day, I don't know that it was," Irving continues, "but I shall carry the image of that funny-looking man, 'the writer,' to my grave," and adds that he immediately took up reading Nash's humorous verse. I'm sure that he, like me and millions of other fans, is glad he did. 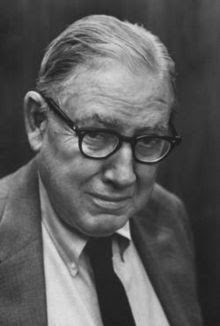 I can recall seeing only a few photos of Mr. Nash, and I think he looked like a pretty regular guy, maybe a bit scholarly. For some reason I tend to confuse him with Bennett Cerf, whose face I do remember well, from the panel of What's My Line?--but I'm more familiar with Nash's work. I even have a volume of his collected poetry on the bookshelf about ten feet from where I'm sitting right now. Occasionally I open it to a random page and read a few lines, and whenever I do I seem to feel a little better for the rest of the day.

If you don't already know Ogden Nash, here's some quick background. America's most accomplished writer of light verse, Nash was born in Rye, New York, in 1902 but moved to Baltimore in his thirties and lived there until his death in 1971. He was at different times a teacher, a playwright, a lyricist, and an editor at Doubleday, but above all he was a poet, publishing more than 500 poems in venues from The New Yorker to The Saturday Evening Post.

A few interesting pieces of trivia: he was descended from the brother of General Francis Nash, who gave his name to Nashville, Tennessee; his family lived briefly in a carriage house owned by Juliette Gordon Low, founder of the Girl Scouts; and his death was the result of an infection from, of all things, improperly prepared coleslaw. 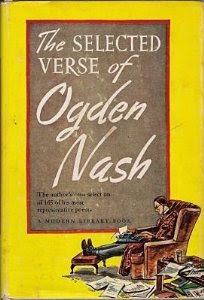 I recall that my friend David Dean once mentioned in a SleuthSayers column the fact that some words sound good even though they might not be real words. I agree, and I've used them in my own fiction--usually as verbs--when someone THUNKs his head on the sidewalk, or a helicopter whopwhopwhopwhops its way overhead, or a boomerang whickers through the air. (Yes, I know that's called onomatopoeia, but unless they're Hawaiian I'm not fond of words that have four vowels in a row. I'd rather just say it's "using words that sound like the sounds they make.")

Ogden Nash loved to create nonexistent words, especially in rhyme, and instead of being distracting because of their difference, they were wonderfully appropriate. Of babies, he once wrote in a poem, "A bit of talcum is always walcum," and on the subject of wasps, "He throws open his nest with prodigality, but I distrust his waspitality." My favorite is probably "If called by a panther, don't anther."

Trying to imitate the master

While it probably wouldn't be ethical to use examples of Nash's "invented-or-otherwise-zany-word" poems in their entirety here, I have no such qualms about showing you some of my own. The first of the following ditties was published in Futures, the second in Rhyme Time, and the third in a magazine called--believe it or not--Volcano Quarterly. The last two have never even been submitted (and probably for good reason).

When chased by a crazed wildebeest,
I preferred not to just kildebeest;
So I found a snapshotta
My wife's cousin Lotta,
Which immediately stildebeest.

If the country of Yemen
Were governed by Britain,
Their gas would be petrol,
Their dresses tight-fittin'.
And sports fans could watch,

For the price of a ticket,
Arabian knights
Playing Yemeni cricket.

An inactive volcano named Dora
Was implanted with buildings and flora;
And some say since the mayor
Has his offices there,
It puts out more hot air than befora.

Your investments crashed? Your money's gone?

Be neither sad nor jealous;
It isn't really gone--it just
Belongs to someone ealous.

THE PAIN IN SPAIN

She ran with the bulls at Pamplona;
One stuck her, another steptona.

This kind of goofy wordplay is a pleasure to write, and I can't help thinking that Mr. Nash--yellow bathing suit or not--was probably a happy and delightful person in real life. I wish I'd known him.

I've heard he is possibly best remembered for the expression "candy is dandy but liquor is quicker."

Neither one is as much fun as his light verse.

LOL, John. I particularly like your Distribution of Wealth. My favorite Nash poem doesn't have any made up words in it, and I THINK I know it not from a Nash collection but from its inclusion in a paperback anthology of humor edited by Bennett Cerf that found its way onto my parents' bookshelves in the Fifties.

Some primal termite knocked on wood
And tasted it and found it good
And that is why your Cousin May
Fell through the parlor floor today.

Liz, "The Termite" is one of those in my collection of Nash poems. I love it.

By the way, Fran Rizer, whose comments have not been posting yesterday and today, sent me the following via an email:

"I used to write limericks constantly, including 'Unchained Limerick,' which went on forever, one after the other, and told a story. No, they weren't all risque."

Great stuff, John, and very funny. I think you're giving Ogden a run for his money!

A lot of times when I'm writing I'll stop at a word I just put down (a really good one, too) and ask myself, "Is that a real word, or did I just make that up?" I'm always relieved when I determine that it is real, but very often disappointed when it isn't and it sounded so right.

But liquor is quicker.

John, Ogden Nash is one of my favorite rhymers and I delight in reading his very clever verse. Your pieces would rank up there with them, and I am sure he would say the same.

Some time ago I met and had dinner with Richard Armour, a Nash contemporary. He was a little jealous of Nash, I believe, and was somewhat miffed that one of his rhymes was always attributed to Nash. --A funny thing the ketchup bottle, first none will come and then a lot'll.

Good column. I'd like to see more of your efforts.

Back in the early 1970s Ogden Nash's brother (can't remember his name) lived in an apartment building in Pasadena owned by my first wife's parents. Apparently he was sort of a broken man. He kept trying to write poetry like his brother, and couldn't pull it off. Every few weeks he would wander down to my then-father-in-law's apartment to share the poems, which were uniformly straining for something he just couldn't quite pull off.

John, I got a good laugh out of "South of Saudi."

A gentleman dining in Kew
Found quite a large mouse in his stew.
Said the waiter, "Don't shout
And wave it about
Or the rest will be wanting one too."

I've found it a propos to quote in all sorts of situations. ;)

Okay, Liz, I have one that has two versions.

Clean last line: She grabbed up her heart and she ran

Risque last line: She grabbed up her panties and ran

Now I have to see if this is going to let me post.

Thanks for sharing, John. I really chuckled at "South of Saudi."

Thanks to all for your kind comments. I think there's just something about light verse, and especially limericks (clean AND naughty), that appeals to a great many folks.

Aside from verse, there are some authors (Steve Martin, Kinky Friedman, Carl Hiaasen, Woody Allen, Janet Evanovich, and others) who write wonderfully funny stories. As mentioned earlier, that kind of thing just brightens my day.

Mr. Floyd: How does this one grab you: From "Means, Extremes and Monotremes."

What say, duckbill platypus?
Part bird, part mammal, part reptile.
Nature's sideshow.
Would that Darwin could
explain what
God intended when
He placed you on this
Man's earth.
Love your stuff. Yours truly, Toe.

My attempts at Nashian wordplay included the following:


(For mystery lovers, Nash is credited with the phrase "Had I but known..." to describe certain fictional heroines.)

That DOES grab me, Toe. Nature's sideshow, indeed. Many thanks!

My brother and his wife have been encouraging a couple rabbits to live in their back yard in downtown St. Louis. Last week they sent me pictures of 7 cute little bunnies cavorting in their back yard. I replied to them with the following, with obvious apologies to Mr. Nash:

The trouble with your bunny habits
Is that invariably they turn into rabbits.

Careful, Dale--you'll soon be coming up with these little ditties when you should be writing fiction instead. But it sure is fun . . .

Those are fun, John. If you hadn’t told me Nash penned “candy is dandy but liquor is quicker,” I’d have guessed another favorite, Dorothy Parker.

When I first began teaching myself CMS, I found a small book IBM published unlike anything else they put out. It was a guide to CMS and carried a number of Nash’s animal poems. I hung onto that little book for years to show outsiders the Blue Giant did have a sense of humor.

I’m glad Toe and others posted their favorites.

Leigh, I never knew that, about the Nash verse being in the CMS guide.

Every time I think of "funny" things at IBM, I think of Bob Newhart's skit about Herman Hollerith, the inventor of the punched card. (Look it up on YouTube.) For years and years Newhart performed live at our annual achievement conferences, and he was always hilarious.