I've been on vacation for the last couple of weeks, and I only got a chance to check in a couple of times, but all I can say, from reading my co-writers' blogs, is that (1) they know a lot more about writing than I do and (2) I've got to start writing more.  I don't outline - although I may try to start doing that; I don't journal about my writing - though I may start doing that, too.  What do I do?  Well, I try to write something every day, even on vacation.  (I keep a journal, just not specifically about my writing.)  And I try to pay attention.  I watch.  I listen in.  I mull a lot.  And I try to describe it, at least to myself.

We were on a cruise in the Caribbean, which we had won on our last cruise, playing the cruise lottery.  It was a great cruise, but then I love cruises, because all you have to do is unpack once.  After that, it's up to you when you want to eat, what you want to do, and if you want to do nothing at all, there's the deck chairs, the poolside chairs, the top deck chairs, the library chairs, and, if worst comes to absolute worst, your room.  And I like doing nothing, when this means sitting in a chair and watching the ocean and watching people.

And 1200 people on a cruise ship can indeed represent the entire gamut of humanity.  As opposed to the endless "People of Wal-Mart" photos, the cruise clientele range from the Felliniesque to Mr. & Mrs. Smith, and everything in between.  Every weight - which rises over the course of the cruise, as we all know - every age, every height, every nationality.  And once in a while, something unique.  Something that says, check this out:

The very thin Asian girl, who was with a very pasty older Englishman, who came to breakfast, took 2 HUGE pieces of cake, went to a back table, and was gone 30 seconds later leaving an empty plate.  (Obvious questions: Was the cake in her bag or in her stomach?  Was she headed back to the room or to the bathroom first?) 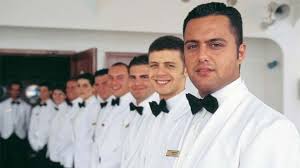 The relentless smile on the face of an Indonesian steward, which relapsed into an existential exhaustion any time he was left alone for a few seconds.

The old man who sat for hours aft every day, looking out at the wake of the boat, with all the hunger of Edward for Bella.


The monarchs of the ship, the headliner entertainment, a married couple, strolling around the ship doing their best to look stylish and hot and powerful and above all the hoi polloi who were their audience.

An older woman, a deep dyed glorious blonde, generously proportioned, lavishly painted, dressed in a rainbow, with a laugh that would have made Bette Davis come over and offer her a cigarette.  (Fun to talk to, too.)

An Aussie who assured me that I needed to make the trip to Australia sooner than later, because time was fleeting...  and later told me the story of his wandering life as we stood thigh deep in the Caribbean.

The last didn't surprise me a bit - I heard a lot of people's life stories on the trip, and I always do when I'm traveling.  Maybe I look trustworthy, maybe not; maybe I just look interested.  (Which I am.  I am insatiably curious, and I am always willing to down tools and listen to someone's story or read a book.)  Maybe it's because I'm a stranger and they'll never see me again.  Maybe it's because they're traveling, and they need to assure themselves of who they are.  Or, in some cases, they're rehearsing a new persona.  Seriously.

Many years ago, I was fortunate enough to go to a writer's colony (one and only time, at Ossabaw Island, Georgia), and while I was there, I had a memorable conversation with a woman.  She was married, and it was the first time she'd been away from the family in years, and she was at first bewildered, then bemused, and then bedazzled by the realization that, since no one knew her there, she could be anyone she wanted.  For the first time, she could choose who and what to be.  (I'd already done that years before, but that's another story.)  We agreed, it was interesting, and she should pursue the opportunity as far as she could.

How far was that?  Hard to say.  The flip side of changing who you are - running off and becoming someone knew - is what is called nowadays "The Flitcraft Parable" in Hammett's "The Maltese Falcon" - Mr. Flitcraft, who is almost killed by a falling beam one day and leaves his job, wife, children, everything, without a word and vanishes:

"He went to Seattle that afternoon," Spade said, "and from there by boat to San Francisco. For a couple of years he wandered around and then drifted back to the Northwest, and settled in Spokane and got married. His second wife didn't look like the first, but they were more alike than they were different. You know, the kind of women that play fair games of golf and bridge and like new salad-recipes. He wasn't sorry for what he had done. It seemed reasonable enough to him. I don't think he even knew he had settled back naturally in the same groove he had jumped out of in Tacoma. But that the part of it I always liked. He adjusted himself to beams falling, and then no more of them fell, and he adjusted himself to them not falling."

Or, in other words, you can run, but you can't hide, at least not from who you really are. Was Hammett right or not?  Can you reinvent yourself, or do you simply put on an existential wig?  Discuss, children, and we will talk more later.