Lately I've been reading a lot of mysteries by James W. Hall. His series protagonist lives in the Florida Keys and enjoys, among other things, tying fishing lures. In Hall's fifth novel, Buzz Cut, the hobby has become sort of a business venture, and the lures don't seem to work anymore. They won't catch fish. Here's an excerpt:


His flies had lost their allure. He had always tied them for himself. Sold his extras. The compulsion behind each one was the simple desire to snag his own bonefish. To concoct his own bait so appetizing it would guarantee the thudding strikes and wrenching excitement he had relied on for more than thirty years. But he'd lost something, tying them exclusively for others. His fingers committing the same act, tweezers and scissors, Mylar and feathers, hackle and ribbing. Everything exactly the same. Identical to the eye. But now they were duds. Failures on some level so subtle, so subatomic that only the fish could see it.

That got me to thinking. Can that kind of unconscious burnout happen in other creative endeavors as well? Can it happen in writing?

The Over the Hill Gang

How often do you find that certain authors whose work you've been reading for years suddenly don't seem to write as well or as compellingly as they used to? I won't call any names here, but I can think of at least half a dozen bigtime novelists whose latest work doesn't seem to be able to deliver the same punch that their earlier (and sometimes earliest) books did. The style and voice are the same, but the stories themselves just aren't as entertaining. They don't pull you in and hold you the way they once did.

If that's true--and I believe it is--then it's certainly a contradiction. One would expect a craftsman of any kind to get better the longer he or she practices that craft. So the question is, what could cause a writer to lose some of his or her appeal, and effectiveness?

Part of it could be the fact that doing something--anything--day after day, year after year, can grow boring for the person doing it. The old saying "familiarity breeds contempt" was probably meant to apply to relationships, but it could also apply to fields of endeavor. The quality of the product can be directly proportional to the level of enthusiasm of its creator. I recall reading someplace that the cars that go through the assembly line on Monday usually don't turn out as well as those assembled later in the week.

Or maybe, as in the case of the fly-tying fisherman, the artisan starts doing things more for the end user than for himself or herself. I realize we should all try to "write with the reader in mind," but we must also write in a way that pleases ourselves. I've said that even if I knew I would never publish another word of fiction, I would continue to write it anyway because spinning these tales is so much fun to do. For me it's therapy as well as recreation. The process itself is enjoyable and satisfying and relaxing. 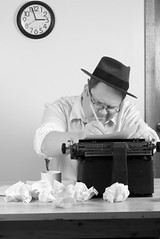 But what if you're writing under a tough deadline? I once heard a well-known novelist tell a group of beginning writers that "your first novel will probably be the only one that's really fun to write--and might be the only one that you're ever completely satisfied with." The reasoning is that if that first novel is successful, your agent and publisher will probably want another book from you every year. Maybe more. And when that happens, what started out as play can quickly become work. All of a sudden you have responsibilities, your audience and your publisher have expectations, your hobby has become gainful employment, and your merry romp in the fictional clover is now a real job.


(By the way, when I say "first novel," I'm referring to published work. All of us have stories and novels that never saw the light of day, and for good reason. I suspect that many famous authors have a few unpublished books--truly first novels--stuffed underneath their beds or in the back of their closets.)

The Top of the Hill Gang

I can think of several ways that writers might prevent or recover from "losing their edge." Intentionally or not, some authors seem to have extended their popularity--and probably their careers--by writing in different genres (Larry McMurtry, Nora Roberts, Evan Hunter), writing both series and standalone novels (Harlan Coben, Elmore Leonard, Robert Crais), creating more than one series (James Lee Burke, Robert B. Parker, John Sandford), writing both novels and shorts stories (Lawrence Block, Stephen King, Jeffery Deaver), and collaborating with other writers (James Patterson, Tom Clancy, Janet Evanovich). It might also be said that authors like Thomas Harris and John Irving stay at the top of their game by going more than a year--sometimes several years--between novels. However effective these kinds of things are, I suspect that they are done more for personal reasons than commercial reasons. Maybe they ward off the boredom we talked about earlier.

In closing, let me mention that some authors seem to have kept their ability to thrill and entertain throughout their careers. Lee Child, Carl Hiaasen, Greg Iles, and Dennis Lehane come to mind, and I think some of Michael Crichton's later books were as strong as some of his early ones.
As for Stephen King, his novel The Stand remains one of my favorites, but his 11/22/63, published 33 years and thirty novels later, was just as good, and possibly better. That's comforting news to me, in more ways than one: King and I are the same age--well, he's two months older--so maybe if he can still think clearly, so can I.

Hey, I'll take inspiration wherever I can get it.