Subtlety Is a Wrapped Sledgehammer

"In real life people don't bother about being too subtle, Mrs. Oliver," said the superintendent.  "They usually stick to arsenic because it's nice and handy to get hold of."

— "Cards on the Table", Agatha Christie


Every once in a while someone asks me if I read up a lot on poisons to come up with new ways of killing people.  No, I don't.  I stick to what's nice and handy to get hold of.  I do this for a number of reasons:

First of all, I believe that most murders are done spontaneously, in the heat of passion, blind rage, or similar emotional storms, which means the killer uses what's at hand:  hands, scarves, blunt instruments, knives, guns, bathtubs, the occasional pond or car or equivalent.

Secondly, I set most of my murders in a small town, so even if murder is premeditated, it's hard to get high-tech stuff to kill people with.  Our local hardware store just doesn't carry the latest in James Bond type equipment.  (On the other hand, our drugstores have needles right out there where anyone can get them any time without any prescription, which still amazes me.)  Thus, antifreeze and ant killer are probably as high-tech as it gets.  Usually, our murderers still just shoot them, pound them, or drown them. 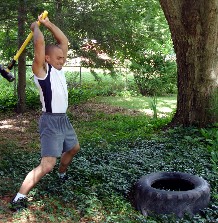 Most killers - no, let me change that - most criminals are not very bright.  They watch a lot of TV, which gives them many interesting ideas, but does not provide them the A to B's of things, and even if it did, they would ask, in the immortal words of Otto in "A Fish Called Wanda", "What was the middle part?"  Plus, they are easily distracted.  If you gave them a high-tech untraceable poison dart that could be administered from a distance via laser technology, there's a good chance they'd drop it on the way home and end up using a sledgehammer because it was handy.  Or they'd trade it for drugs and again use the sledgehammer.  If you told them they really need to be more subtle, they'd figure you meant to wrap the sledgehammer in duct tape or something.

So, in Laskin, South Dakota, people are shot, drowned, stabbed, smothered, strangled, run over, bludgeoned, and frozen to death.  Poison is indeed arsenic or antifreeze, or the occasional overdose of prescription medication.  Just call me an old-fashioned kind of girl.  But don't get me wrong - if I can come up with something new, I will!  :) Latest news from the pen:  Donald Moeller, a child molester who kidnapped, raped, and murdered a nine year old girl back in 1990, was executed October 30th.  A number of inmates threw a party, and I'm told that the cheering could be heard all the way to the death chamber, where, just before they plunged the needle home, Mr. Moeller supposedly said, "That's my fan club."  He was wrong.  Some people saw this as horrible, horrible, more proof that inmates are basically violent, etc.  Personally, I saw it as totally predictable.  The one group all the inmates can/do look down on is child molesters.  And, if everyone would just be honest, they are encouraged to do so.  "They'll take care of him in the pen," is often said at conviction, knowing (without saying it) that that means beatings and gang rape and even murder.  So what did everyone expect?  Oh, and here's a no-brainer:  who let the inmates throw that party and didn't break it up?

On the lighter side, my favorite line so far this year:  "It's not my fault I'm in here.  My baby mamma turned me in for dealing drugs because I cheated on her."  I'm not sure whether he's living in the Land of the Unconscious or floating down the Mighty River of Denial, but I do know he's got a lot of company.
Posted by Eve Fisher at 00:01