David Morrell's forthcoming new thriller, MURDER AS A FINE ART, takes place in Victorian London, and he remarks that his research and the writing itself so completely immersed him in the time and place that it became more real to him than the contemporary, so-called 'real' world. Anybody who's ever written period stories, whether in the distant past or more recent history, can relate. The language you use changes from modern usage– not so much "prithee, sirrah," as perhaps word order– and even the thoughts of your characters are different, because their view of themselves and the world are different from the present day. The easiest trap to fall into is anachronism, a modern viewpoint bleeding into the past, which could be something as simple as cause and effect: we know the Black Death was caused by a bacillus; the people it killed thought it was the hand of God. Specific details are simpler, as in, when did Lucky Strikes go to war? 1942, as it happens.

In both the bounty hunter stories, which take place in the years just before America's entry into World War I, and the Mickey Counihan stories, which take place immediately after World War II, I've found myself slipping into a habit of mind, not so much a slavish devotion to accuracy ('the smell of the lamp') as a mental device, or discipline, trying to think my way into the characters' heads, which is more than just the correct vocabulary. It's time travel.

I've had a much different experience e-formatting my Cold War spy novel, BLACK TRAFFIC, for upload to my website. I hadn't actually taken a close look at the book in over a year, so it came as a surprise to me how evocative, to my mind, the story-telling is, an era and a city that might as well be as distant and foreign as the Mexican Revolution, or postwar New York. It's time travel, but into living memory. The book takes place in Berlin, in the mid to late 60's, and I was in fact there. Much of BLACK TRAFFIC is based on my personal experience of both Berlin and the spook trade of the times. In other words, it's firsthand recollection, and the problem, often, wasn't a lack of specificity, but too much, an overwhelming flood of significant detail. How to pick and choose? Memory is a chancy thing, an unreliable guide to history. I found I second-guessed myself a lot, was such-and-such a thing for real, or something my subconscious overheard, a trick of the mind's eye? Authentic reconstruction is a false hope. 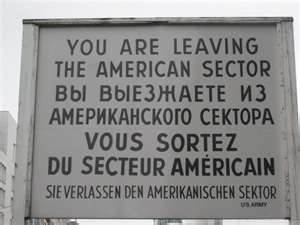 So what I was left with, after filtering out the generic and over-familiar, while keeping the untidy and simply bizarre---the story of the would-be U.S. defector to the Russians returning to West Berlin to feed his cat is based on fact, for example---was still an indigestible stew, underdone and lumpy, needing better seasoning and more time in the pot (which was true of the book as a whole), but in the end, I could only follow my own likes, and forgetting caution, there were a couple of things I cherished too much to discard.

Berlin had a soundtrack in those years, Procol Harum's "A Whiter Shade of Pale." Actually, you heard it all over Europe in the spring and summer of '67, but I always associated it most closely with Berlin, and so did a lot of Berliners. It remains an anthem, even today, for that certain generation, both triumphal and melancholy. Why that particular theme song? I've got no idea. Germans can be a sentimental lot. 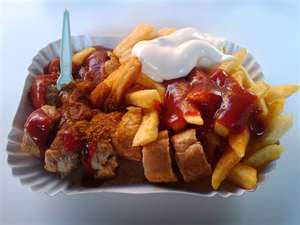 The other totemic association I have with Berlin is currywurst. All over town there were food stalls set up in the street, and wurst stands were the most popular. You got brats or a knock with potato salad and a hard roll, with a dab of mustard on the side, on a paper plate. The odder iteration was currywurst. Basically pork sausage slathered in ketchup mixed with curry powder, and served with French fries. An acquired taste, as you might imagine, but once acquired, not forgotten.

I saw a recent news article saying that landmarks which had been inaccessible when the Wall was up, the Brandenburg Gate, for instance, were now overrun with people, both native Berliners and a raft of tourists, and of course they were teeming with so-called Schnell-Imbiss, fast food. A new wrinkle is that they aren't even stalls, but guys with a hot-top rigged up to a shoulder harness, so they can work the crowd, and your wurst comes to you, not the other way around. Interestingly enough, this has generated some political controversy---not the serving method, but the perceived disrespect of public monuments. It's just part of the urban scene, in my opinion, but the politics of Left and Right in Germany often fixate on irrelevancies. The presence of all that cheap food is is seen as an insult to the historic significance of these symbolic places.

Germans are often accused of wanting to conveniently erase or reinvent the uglier passages of their own history, not just Hitler, say, but the Soviet occupation of the East, and the reinterpretations have a definite bias, Liberal or Conservative, depending on your sympathies. In other words, which history, and who appropriates it. Symbols mirror desired meanings, old wine in new bottles. It seems odd to me that currywurst has fallen afoul of politics and now wears a badge of dishonor, in some quarters. It's only sausage links and tomato paste, after all, and has no dog in the fight, so to speak. Then again, one man's relish is another man's distaste.
Posted by David Edgerley Gates at 00:01

David, you've sent me to Youtube this early in the morning to listen to that wonderful song, "Whiter Shade of Pale." My memories are different from yours, but you brought back some great ones from a time in my life in the '80's. Watched several videos including the original version as well as Procol Harum performing it in 2006 with an orchestra in Denmark. You've also intrigued me in several other ways -- will go to your website to read BLACK TRAFFIC and never having heard of currywurst, I'd like to try it. Can you be a little more specific?
BTW, I understand you're in Texas. Do you have any relatives in SC?

Ex-cuuze me. I meant New Mexico, not Texas.

Good luck with Black Traffic!
The currywurst vendors cry out for a story of their own.

Best of luck with Black Traffic, David, it sounds like something I would enjoy reading. I spent three and a half years in Germany during the Cold War (early eighties version), my specialty was Soviet weapons and tactics. I never came across the currywurst, but ate a lot of bratwurst and pomme frittes with mayo! I look forward to reading your book.

Thanks, all. BLACK TRAFFIC probably won't be up on the website until after Christmas, FYI---my webmaster (or webmistress) is having a baby.
Fran: I don't have relatives in SC, to my knowledge.
David: I was a Russian linguist in the AF, and our target was the Soviet and Warsaw Pact order of battle in Eastern Europe, so a similar mission.

One anachronism I often notice in television action shows are blinking LEDs in electronic gadgets before they LEDs became commercially practical. I suppose that's somewhat to be expected since a large population of Hollywood has never known a world without ICs and LEDs.

Great piece. Fran beat me to it; I was going to recommend that youtube video of Procol Harum performing AWSOP in Denmark. I love the grins on the face of the choir; they are so THRILLED to be doing this. I have every album by Procol Harum by the way.

I hesitate to mention this to someone who was there, but my novel Such A Killing Crime has a scene set in Berlin when the wall was going UP. As for trying to time travel, I had almost finished that book when an article in the New York Times mentioned that in the early 1960s many NY bars did not allow women. I had to rewrite a chunk, but it was worth it.

David, I enjoyed your Placido stories in your e-book, so guess that after Christmas I'll have to take a look at BLACK TRAFFIC.
In the mid-90's when our son-in-law was Army CID in Schweinfurt, Kiti and I went over for a couple of weeks to drink room temp bier with the Criminalinvestigation Polezei (sp) and to practice my college German. Good thing I had a translation dictionary. Every noon we ate brats from a street vendor somewhere. Seemed like every city had a different recipe for their brats, but they were all served in a Kaiser bun with both ends of the brat sticking out. A different stand sold bier and you had to put a deposit down on the mug in case you wandered off with it, then you owned it. Great food in the restaurants and homes. I could get fat over there.