by Robert Lopresti
Late last year I was interviewed by a researcher for a Canadian radio show about advertizing called Under The Influence.  This was for an episode about classified ads,  although you won't find my name in the credits.  Fame slips through my fingers once again.
But what fascinated me in this broadcast was the reference to a book called Strange Red Cow by Sara Bader.  Bader explains in her introduction that she had been looking through eighteenth century newspapers for reactions to the Declaration of Independence when her eye was caught by the following classified ad: 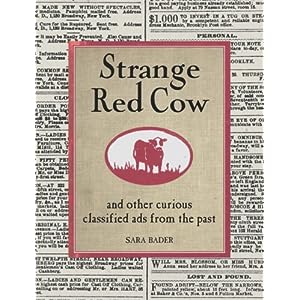 Now, that last one is tragic.  But don't you wish you could read all those stories? Or write them?
Posted by Robert Lopresti at 00:01