MANNING COLES: A Toast to Tomorrow

The first spy stories I remember reading were the Tommy Hambledon books, written by Manning Coles.  I was probably nine or so.  I took an omnibus edition of three Hambledon novels out of the Hancock Point library one summer, and gobbled them up.  It was like eating Fritos, but the books were more nourishing.  I don’t think Ian Fleming was much on the radar at that point.  CASINO ROYALE came out in 1953, but Fleming didn’t really get legs until Jack Kennedy told an interviewer Fleming was his favorite writer.  DR. NO, the first of the Bond movies, was released in 1962, so that was later.  I might have picked up an E. Phillips Oppenheim sooner than Coles---my grandmother had them by the yard---but Oppenheim was pretty lukewarm stuff even then, effete and unconvincing: imagine Lord Peter Wimsey without the wit, and no Bunter.  And a writer like Eric Ambler would have gone over my head.  A MASK FOR DEMETRIOS, say.  Too sophisticated. Tommy Hambledon was just right. 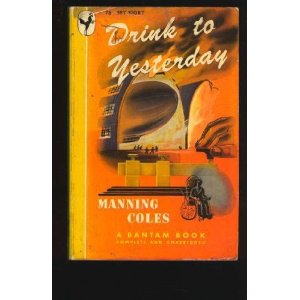 Manning Coles was a pseudonym.  They were a writing team, Adelaide Manning and Cyril Coles.  Coles the man, vice Coles the pen-name, was a spy in both wars, and Tommy’s adventures were based on real behind-the-lines derring-do.  The first of the books (there would be two dozen) was DRINK TO YESTERDAY, about a secret mission in the first war, and it’s pretty sharp, with a zinger of a finish, but it was their second book, A TOAST TO TOMORROW, about the next war, when they hit one over the fence.

The premise of TOAST TO TOMORROW is immediately arresting.  Hambledon, washed ashore near Ostend at the end of the earlier book, half-dead, has lost his memory.  He has a head wound, and his face is badly scarred.  The nurse at the Belgian naval hospital remarks that after the scars heal, they’ll look “too Heidelberg for words.”  Slowly, he recovers.  Amnesiac, but speaking the language fluently, Tommy is taken for a wounded German officer.  Tommy himself believes this, a terrific hook for the story that follows.  A later shock brings bits and pieces of his memory back, and he realizes he was once a British intelligence covert operative.  By this time, however, having been recruited by German intelligence, who think he’s a war hero, he’s risen to senior command.  Tommy is now positioned to be a British agent-in-place, at the heart of the Wehrmacht.  His cover is near-perfect, but not quite---nobody actually remembers him from Heidelberg, or officers’ school at Potsdam---and his back story begins to unravel as a canny Nazi spycatcher picks up his scent.  The novel turns into a cat-and-mouse game, and a real stem-winder, at that, with Tommy trying to .stay one jump ahead of the hangman. 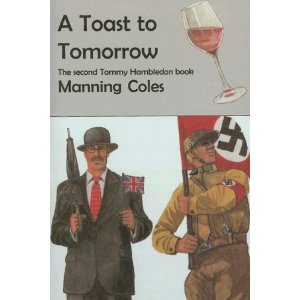 Re-reading the book, fifty-odd years later, you could be forgiven for thinking it hadn’t aged that well.  There are a few too many arched eyebrows and afternoon sherries and old Oxbridge dons with gnomic comments, but what stands up is the tradecraft.  Somebody once asked John LeCarré whether the lingo and the secret handshakes, the culture of the clandestine world, in other words, that LeCarré so lovingly mirrors, was in fact authentic.  LeCarré said, It doesn’t have to be authentic; it has to be convincing.  And here’s where A TOAST TO TOMORROW pays off in spades.  The first clue the Brits get, for example, that they might have a highly–placed asset inside the Reich comes in a radio broadcast.  British communications intercept is monitoring German broadcasts of any description.  This is a propaganda piece, a half-hour radio drama about a wireless operator, and it opens and closes with a burst of Morse, simple background noise, to set the stage, dah-dah-dit, but it begins with a callsign, and the brief message that follows is broken into five-letter stutter groups.  The callsign belongs to a British agent long thought blown, since 1918 and the Armistice, and the coded groups, once recognized as such, can be decrypted.  The scriptwriter is of course Tommy Hambledon in Berlin, and this is how he makes himself known to his former masters in Whitehall.

The two biggest Allied secrets of the Second World War were the Manhattan Project and the code-breaking operation at Bletchley Park, ENIGMA.  The atom bomb wasn’t long a secret after the Japanese surrender, but ENIGMA was still closely held thirty years later.  Cryptography has been a part of war as long as spies have, but the concentration of effort that broke the U-boat codes went on with even greater force into the Cold War.  Bletchley Park was a secret that couldn’t be surrendered, its sources and methods deployed against a different target, Soviet Russia.  For a writer in 1940, or perhaps Cyril, the guy on the team with hands-on experience, to make such an educated guess about the use and importance of encrypted communications, is nothing short of astonishing.  Or perhaps it wasn’t exactly a guess, but an interpolation, filling in the obvious gaps.  A TOAST TO TOMORROW, then, becomes more than a simple story of espionage and pursuit.  It borders on the clairvoyant.
Posted by David Edgerley Gates at 00:01