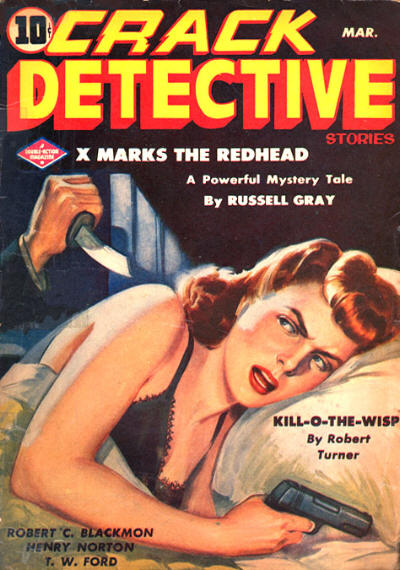 Though it's not politically correct, I have a strong affection for the hard-boiled novel detective of yesteryear.

Phillip Marlowe, Sam Spade and Mike Hammer keep me turning pages, wondering what it'd be like to be their Girl Friday (or any other day of the week.)

Ian Fleming's James Bond character may have been the last of their kind. It seems most of our heroes in fiction today are showing their softer side. And for me, it just doesn't ring as true a hero.

Before you jump to conclusions, I am not some hater of the Feminist Movement. I believe in equal rights and that women detectives can be just as smart as the male detectives. I read and write about several women investigators, police officers and amateur sleuths. I just am not appreciative when women aren't allowed to be women and men men whether it be in real life or between the covers of a book or magazine.

I guess I like characters to be as real as possible just like my friends. I want them to react without thinking what people will think about them if they do. I want them to go with their gut instinct, go with their street smarts and figure out who the bad guy is and where to find him because they have brains to do so instead of someone feeding them information or a computer telling them what to do.

There is something about the 1930-1940's era. The clothes were appealing. Women wore billowing skirts that showed off their waists and legs. Men in hats (NOT baseball caps) just looks commanding. A man in a fedora is not overlooked, especially when he is in a trench coat. (Yes, Humphrey Bogart in Casablanca gets my vote for a real man's man. He isn't really handsome, but a woman knows he is going to take care of her.) And while we're at it, let's discuss Ingrid Bergman in her own hat and trench coat in that movie. She didn't need Rick to save her either. They were equals and neither of them were namby-pamby. Emotional when they heard Sam play it again? Definitely, but that's part of the magic, isn't it. They touch our hearts because they are so darn real.

In the hard boiled stories, the men were sexist. They were also sexy as hell. My opinion is it took a strong woman to get them, keep them and make them happy.

There were two types of women populating these stories:

1. long-legged, voluptuous beauties who came on stage as a damsel in distress, but who could turn the tables on the detective in a New York Minute and become their adversaries

2. the long-legged, voluptuous beauties who had a heart of gold, could type as well as dress their wounds. They were usually the girlfriend/secretary who waited endlessly for their "guy" to figure out she was the one for him.

In the real world, everyone probably looked like the people living on Walton's Mountain, but that's what fiction does for the reader in transferring him away from the regular and straight into the glamorous life of a detective. (Real life detectives probably read mysteries for the same reason.)

Okay, so I said I want the characters to be real, but not so real that they don't offer me an escape from the day-to-day routine. If I am reading about a cop, I visualize a Bradley Cooper, not so much a Seth Rogen.

I also believe women can be just as dastardly as men when it comes to crime. I actually welcome female sleuths as long as they are as smart, savvy and as sexy as I wish I were. Bring it on, Wonder Woman (who never had to stomp on a man just to prove her worth – although she certainly could have.)

I like Katniss from Hunger Games who had skills, bravery and the foresight to pay attention and learn from her mentor. I like Indiana Jones when he isn't standing in a classroom where he seemed less sure of himself. Give him a whip and let him loose.

I like to read and I am in search of a great old-time detective story that will take me away from the kid gloves approach of too many authors trying to make everybody happy.

Is that too much to ask?
Posted by Deborah Elliott-Upton at 00:00

WOW!! That was a great post! I absolutely LOVED it!
--Dixon

I always liked Mike Shayne (Brett Halliday's detective). Frankly, I can't stand Mike Hammer - he's a fairly crude, violent drunk and I thought Velda was an idiot to stay a virgin for him for what, twenty years? before they finally hooked up? But my favorites were Emma Peel and John Steed. The other day I was asked who (as a child) I wanted to be when I grew up. I said Robin Hood and Emma Peel, which about summed it up.

What guy wouldn't want to be Phillip Marlow or James Bond? If they deny it, do not put them in charge of your bank account!

Eve, I wanted to be John Steed because of Emma Peel.

Oh Eve, I probably wouldn't want to marry Mike Hammer either, but I sure enjoyed reading his stories. In fact, he is one of my favorites. I think some good woman could have made his life better and probably Velda had her own problems for waiting that long. What I'm thinking is the storyline between them worked for so long because the public was interested in that long enough for that many sequels to take 20 years to be written. But, I absolutely loved his tough guy image. He probably had a soft side WAY down inside somewhere that he'd share with a woman sometime. Just not in these particular stories. And I also love The Avengers! THAT was a team partnership working together!

Deborah, my post on my other group mystery blog at Poe's Deadly Daughters today is, coincidentally, a great companion piece to this one. It's about Georgette Heyer (the other end of the genre fic spectrum from Mickey Spillane), whose Regency romances featured sexy, sardonic, athletic, commanding heroes--and how the post-feminist me can't feel the same about them as she used to.

Yes, The Avengers was the ultimate team partnership. Emma was always intelligent, sexy, classy and deadly, Steed was the same, and they always treated each other with just enough double entendres to let your imagination run wild.

I still like Philip Marlowe and Sam Spade - he really should have been brought back for more than one novel! I got kicked out of a class in junior high for reading James Bond, which I still believe was sexist - I think if I'd been a jr. high boy they'd have left me alone. (Also in my jr. high days I loved Simon Templar a/k/a The Saint - Patricia Holm was a cool item - but I did a re-read a few years ago and found the style rather precious.)

Great post Deborah!It makes me want to delve into some great old crime fighter stories I have forgotten about.