I'm spending the better part of a year living in South Africa. If you're anything like me, you probably harbor pre-conceived notions and yet wonder what the land is really like.

I've lived and worked in Europe and South America. Each country has a 'personality' not to be defined by or confused with their nation's politics. A national personality is both amalgamation and generalization, a distilled broad-stroke synthesis of millions of people.

South Africa… I've never visited a land whose personality so closely matches that of North America– the friendliness, hardiness, sense of humor, spirit of industry and entrepreneurism, a determination to conquer prejudice, and the will to persevere when times get tough. And, everyone speaks English.

To many Americans, South Africa must appear exotic, even strange, but I have a surprise for you– it's more familiar, more 'ordinary', more like America than you can believe. To be sure, I've spent almost all my time in the province of KwaZulu-Natal (birthplace of the Zulus), which is like a tourist spending their entire visit in one American state and thinking all of the US is like (shudder) Florida. KZN is the most English of the nine provinces, so my perceptions may differ from parts of the country that are dominated by, say, Dutch Afrikaners.

People pepper their speech with Zulu words. I love the expressive sound of isiZulu– the actual name of the Zulu language. For example, a rattletrap vehicle is a skadonk and a bad guy is a sigebengu (prounced 'skabanguh'). The onomatopoeia word for tractor is gunda-gunda… anyone who's familiar with older farm machinery can't help but smile.

One word I adopted is muti (moo-tea), meaning medicine, but it can also mean any liquid put to good use, such as 'dishwashing muti'. Americans use at least one isiZulu word without realizing it– fundi, an expert.

Three weeks ago, our friend Geri came to visit. She's the epitome of the Southern lady, soft-spoken and very easy to underestimate as some have learned to their surprise or dismay. She travels perhaps twice a year and accepted Cate's invitation to visit.

Fortunately Geri travels well and is patient, since the textbook publisher seemed to ramp up the workload at the same time the deadline loomed like a plunging vulture. But family was good to us, Tig and Sue, who lent us their home. Geri, Cate and I lived on the beach, sunbathed and waded in the Indian Ocean, and visited the Oribi Gorge, a scenic combination of horticulture, agriculture, and wildlife. Geri rode a Segway along the beach in Durban and into Moses Mahbida Stadium.

Thanks to friends Dave and Shirley, we visited Springbok Lodge in the Nambiti Game Reserve. Among other bragging rights, Nambiti boasts the 'Big 5', the five most dangerous animals to hunt. South Africa's bank notes portray the Big Five: rhino, elephant, lion, cape buffalo, and leopard. This is even more impressive when you realize the Egyptians considered the hippo and crocodile to be the most fearsome. These aren't animals to fool around with– even the ostrich has been known to kill men.

Four out of Five

On my first visit to the game reserve weeks earlier, locals told me I was amazingly lucky to see the Big 5, all except the leopard. And these weren't distant sightings: A mother and child rhinoceros galloped along side the Land Cruiser. We were close enough to grazing cape buffalo to see oxpecker birds cleaning their coats. Only days later, bad tempered buffalo turned on a Jeep and wreaked thousands of dollars of damage upon it. And the lions– a pride of three strolled past our Land Cruiser so close you could have flicked a booger at them, had you been so foolish.

During that visit, herds of zebra and giraffe seemed to be everywhere, and it's an amazing sight to see giraffes browsing above the treetops. Cate calculated we spotted 13 different kinds of buck– the South African term for deer and antelopes– from the small bush buck, to impala, hartebeest, wildebeest, and the largest of all, the eland.

On this trip with Geri, we again saw all the Big 5 except the elusive leopards. Birds surrounded us. Bachelor rhinos eyed us warily. As we watched, mother elephants taught their calves how to uproot trees: In the winter, roots contain more nutrients than barren branches, so elephants require a goodly supply of trees to munch upon.

Normally, hippopotami soak in ponds like huge inert hogs, imitating boulders. Not this time– hippos rumbled ashore during an early morning stretch. One juvenile postured and played with another, putting on a show.


You may notice a theme here. Every time Geri raised her camera, subjects would spin around and pose: "Wanna see my butt?" 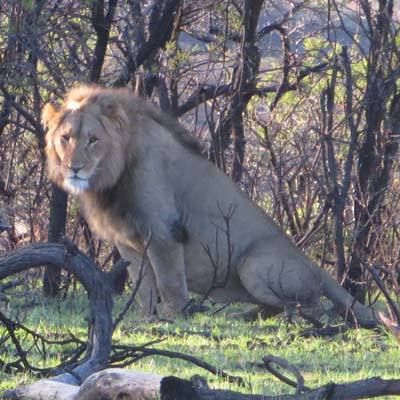 One afternoon we found lions hidden in the tall grass, but a big male wandered off, his bum toward us,to check his kill because jackals were wandering the area. Minutes later he strolled back, at last facing us. Geri raised her lens and… the big lion paused and… Geri aimed her camera and… the lion squatted and…

Cate burst out with "Dude, you need fiber."

Later– yesterday in fact– Geri and Cate found a calendar of animal butts. It looks like Geri's animals thought they were still posing for it. 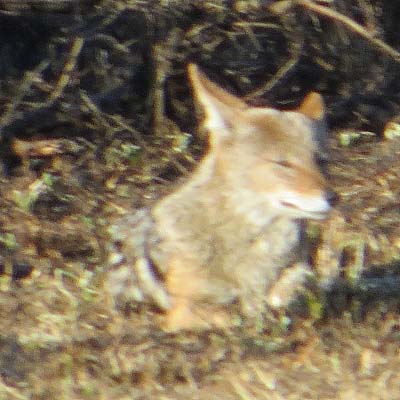 When tracking, Rangers communicate 'visuals' over the radio in isiZulu so passengers don't leap out of their seats to spot the latest 'find' and scare off– or attract– the animal's attention.

Geri took great photos of a lounging jackal, rarely seen sunning. She also got a great snap of a warthog. They kneel when they graze and shuffle along on their foreknees. In another great bit of luck, rangers spotted the reserve's lone cheetah– just one cheetah in 22,000 acres– lions had killed the others. 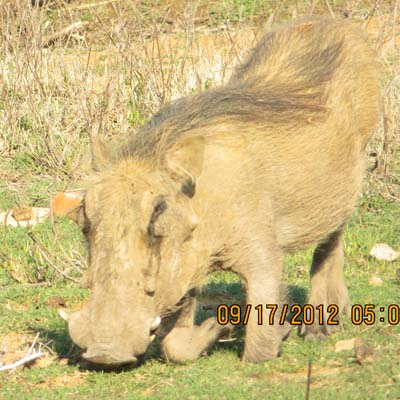 Through poaching and hunting, populations of some big cats number in two and three digits. Elephants are threatened in many places, but may be stabilized. The black rhinoceros is critically endangered and other species are believed to be extinct. For what? For their horn, that bit of keratin thought to be an aphrodisiac in some Asian cultures.

Speaking of cultures, to Westerners, elephants, rhinos, and hippos are great lumbering beasts, but to Africans, they are elegant, powerful, imbued with history and mystique. They're like bison and bears to the American Indian, creatures to be respected and protected in a modern and hazardous environment.

This is the Africa of legends, of Edgar Rice Burroughs and H. Ryder Haggard, and perhaps of Lee Falk, Lyman Young, and Wilbur Smith. Like our state and national forests, this commitment preserves and conserves habitat so that species– some numbered in the hundreds, some in the dozens or fewer– have a narrow chance to survive and perhaps thrive.

So what do I think of South Africa? I love it. I love it here. I wouldn't be surprised if you would too.
Posted by Leigh Lundin at 00:00

I envy you, Leigh, never having been close to that part of the world. two years ago we met a South African woman, a real charmer, and i wish i could remember the name of her tribe. she told us that she was engaged to a Zulu. "Those movies you see of African warriors dancing? That's Zulus. The rest of us are mich more relaxed.". Quite a character.

Rob, I think you would love it. History and multiculturalism abounds here.

Zulus were fierce and aggressive, displacing other tribes like the Shona and entirely wiping out at least one that practiced cannibalism. If I remember right, the worst British defeat came at the hands of the Zulus. Both combatants respected and honored their enemies for their bravery.

What wonderful animal pictures.
I hope you - or your friend- will take some bird shots too for the birdwatchers among us!

Many people here are bird-watchers, casual to avid. In the game reserve, we saw black-bellied bustards, cormorants, a shrike, cape vultures, raptors, lots of guinea fowl and quite a number of large pied crows. I'm hoping amongst my companions, we can get together some of our bird shots.

Fascinating column, Leigh. It's no wonder you're having a good time there.

Leigh -- Thanks for an interesting post giving life to a part of the world many of us will never encounter first-hand.

Dale and John, the air fare is staggering but I wish you could experience the country. The funny thing is I'm sure most people would expect it either to be a lot more exotic or hopeless third world, neither which is accurate.

I had much more I wanted to say, but I trimmed out a lot to make it readable. One note though makes me smile. South African has both electric and diesel trains. Whenever I hear the diesels, I think of home and an old railroadman told me why: Their diesel engines are manufactured in the US, so the engines and even the train horns have that distinctive American sound to them. Little things like that make me smile.

Leigh; Glad my favorite Mac instructor had a great time, as we hit the fall of our life spans travel can be the most precious. Yes feeling vulnerable have a bad cold. I would encourage all parents to give their children as much exposure to travel as possible. As you and I know the books, videos and internet to do not do it justice. Even if they can only afford to travel the US it is the best education, and impressionable to the young mind.

Leigh, you have made me want to travel to Africa. What an intriguing article. Thanks.

Loved this, Leigh! You went from matter-of-factual to rhapsodising! Thanks, thanks, thanks for seeing the country through your eyes! I won't look at a tractor again the same way! :) :)

Unknown, I'm sorry to hear you have a cold. You're right that travel expands the mind and spirit, and you bet Geri had a great time. I'll tell her you wrote.

David, I hope you get to make it some day. The sightseeing is fun, but being with the people is wonderful.

Jeff, thank you for the compliments. The Royal Show is very much like one of our state fairs with quilts and artwork, junk food and juice, livestock, tractors and farm implements. I admit when I hear the word gunda-gunda, I hear an old John Deere and hay baler.

Leigh, shy of winning the Powerball, I doubt we'll make it over there, however your article has made South Africa appear to be a very nice place to go visit. A couple of years back, we had an internet link to a couple of video cameras set up in a game park which allowed our two young grandsons to watch wildlife at some of the water holes at dusk and dawn. They (and Kiti and I) enjoyed that.

Leigh, sounds great. If I ever get an opportunity to go to South Africa, I will, but, like R. T., I think I'll have to win the Powerball. If and when you ever return, come out to South Dakota, and I'll take you out to Custer State Park, into the middle of one of the largest public buffalo herds in the US. I guarantee you that you'll see more than buffalo butts!

RT, that web cam is brilliant! Nambiti is so far out in the sticks the camps and lodges have their own electrical generators and they connect to the internet via satellite, but that's a great idea. It's amazing to stop by a pond for lunch and look at all the prints along the shore. The elephants' prints look like dishpans!

Wildebeest and zebra often graze together side-by-side while giraffe browse among the treetops. Wildlife photographer Manoj Shah captured this amazing photo sequence of a surly hippo blocking a ford across a river.