The Name Is Familiar 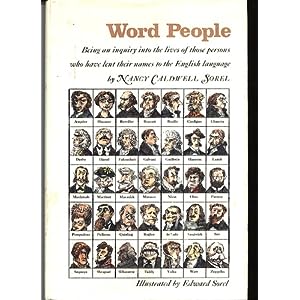 I recently stumbled over a book in our library called WORD PEOPLE, by Nancy Caldwell Sorel.  The first thing you are likely to notice about the book is that the illustrations are by her husband, the great cartoonist  Edward Sorel.

It is a book about eponyms, people whose names became words.  I was intrigued by how many of them are related to crime.  Some of them will probably be familiar to you, others not, so try to guess them before you read the definition.  I’ll start with the easiest.

Joseph Guillotin – He did not invent the world’s fastest haircut machine; he merely popularized it in France just as a whole lot of people were about to get de-lifed..  Dr Guillotin noted that noblemen were executed by sword, while peasants were hung, and suggested that it would be both more egalitarian and more merciful if all convicted criminals were decapitated.  The first guillotine was a bargain at 300 francs, plus another 20 for a bag to catch the head..

Henry Deringer – Inventer of the banjo.  Just kidding.  His small gun was so popular that fakes were made in lifetime, including French guns called Derringer, a name that seems to have stuck better than his own.

Captain Charles C. Boycott – Agent for English landlords in Ireland.  Irish leader Charles Parnell said of such people “leave him strictly alone!”  People refused to work for Boycott, or even sell him food.  He and his family had to flee.  Interestingly enough, years after the reform laws the Irish had demanded were passed, Boycott returned to Dublin on a visit, where he was recognized and cheered.  People wanted him to know it had been nothing personal.

Colonel William Lynch.  According to no less an authority than Edgar Allan Poe, the colonel started a vigilante gang in Pittsylvania, Virginia in 1780, thus giving rise to lynch law, and later to the verb.

William Burke – Irishman of Burke and Hare fame, They killed people in Edinburgh in order to sell their bodies to a medical school for autopsies.  To burke is to smother.

E.C. Bentley – This mystery writer’s middle name was Clerihew, the handle he hung on a form of poetry he created: a quatrain about a person, whose name is the first line.  For example:
E.C. Bentley
To put it gently
Earned no disgrace
With Trent’s Last Case

James Granger -  Never heard this one, but it is fascinating.  Granger was a British clergyman with a rather horrible idea.  His Biographical History of England had no illustrations.  Instead the reader was encouraged to buy OTHER books and slice them up to illustrate your copy of his book.  To grangerize means to mutilate one book in order to create another, ie. I personally prefer Monsieur Guillotin’s contribution.

And here’s one that didn’t make Sorel’s book (possibly because the word is trademarked!) but which I use from time to time.  I’ll bet Dale recognizes it, if no one else does:

Frank Shepard – in 1873 he invented Shepard’s Adhesive Annotations, which allowed attorneys to slap changes or revisions to laws and court cases directly on the page that contained them.  Today lawyers still shepardize  cases by checking Shepard’s Citations or competing services to see if legal opinions have been overruled or otherwise altered.

And here are a few more from the book you might not have thought of as eponyms: quisling, mesmerize, cardigan, derby, sideburn, silhouette, and dunce.

Posted by Robert Lopresti at 00:43