Among the lessons I learned at my mother’s knee is this one: the ocean is better than the bay; a lake is better than a pool. I grew up spending as much of every summer as I could on the world-class beaches of 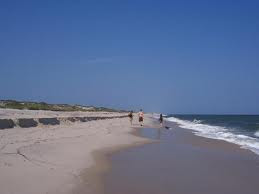 Long Island, including Jones Beach, which was an easy drive from where we lived in Queens, and Hampton Bays, which was not at that time considered one of The Hamptons, since its year-round population was working-class conservative and its summer people, at least the ones we knew, were a small band of “progressives,” many of them teachers like my aunt who had a house there. The big social event of the season was always a Labor Day party to benefit the latest leftist martyrs, the Something Seven or the Something Ten. But let’s talk about the beach.

The modest little house my husband and I were lucky enough to snap up during a “soft” period for real estate in 1990—having rented unwittingly to a trio of drug dealers who set the neighborhood on its ear, the local businessman who owned it was glad to get rid of it—is only seven miles from one of the superb beaches maintained by the Town of East Hampton, which stretches from Bridgehampton to Montauk. 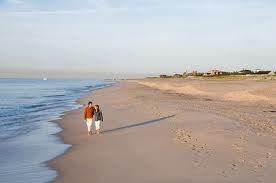 At low tide, you can walk for miles along the beach if you’re so inclined. If you want less wind, you can lie back against the pillowy dunes—not ON or IN the dunes, please: every spike of beach grass was lovingly planted by the hands of environmentalists, and the humps of sand have only recently recovered their full roundness after being sheared off by a hurricane nine or ten years ago. Or, as I do, you can choose a front row seat, where a cool breeze is always available, even on the hottest day, and if you don’t watch out, a curl of wave on the incoming tide may swamp your beach towel and carry your sandals off to Spain.

My mother, who if asked, “How was your vacation?” would respond by enumerating the swims she’d had, taught me not just to observe but to revel in the fact that the ocean is always different. At least that’s true of the Atlantic off Long Island. 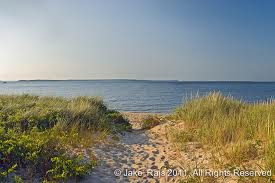 My mother always maintained that there’s nothing like the morning swim. When I was a kid, we’d stay at the beach all day, “earning” our lunch by leaping and diving through the waves (“Over!” “Under!”) in that icy morning water. Now, between adult responsibilities and the hole in the ozone, I seldom get to the beach before 3 PM. But I still miss that morning swim.

It’s not just a matter of the weather: bright and clear one day, hazy and humid the next, overcast on the third day, with a storm rolling in overnight. 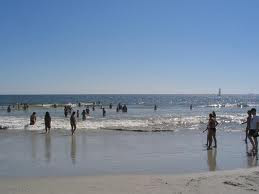 Even if the skies stay blue, flat silky seas on which it’s easy to swim laps (without having to turn every sixteen strokes as you would in a pool) can be replaced by rearing “seahorses” of foam and crashing breakers. In 1995 I spent several days on the campus of the University of California at San Diego for a conference, and I was amazed by the way the turquoise waters of the Pacific in La Jolla remained consistent over time. If I went to the same spot near the jetty every day, I could jump the same gentle rollers day after day after day. It was nice for a change, and La Jolla itself is probably one of the most beautiful places in America. But I’m an East Coast girl, and I like an ocean to surprise me.
Posted by Elizabeth Zelvin at 00:01