Two weeks ago I received one of those emails that everyone at SleuthSayers hopes for when their computer goes “Bing!”  The email was from Janet Hutchings accepting my latest story, Literally Dead, for publication in Ellery Queen Mystery Magazine.

The time period between a story’s acceptance and its publication – measured in months, usually measured in many, many, months – always reminds me of what it felt like as a child waiting for Christmas.  You know it’s coming and there is great joy in the anticipation.  Part of that also is because at that stage you know you have made it.  You came up with an idea, tinkered with it until you were pretty sure it would work, fleshed out the characters in your mind, drafted, edited, re-edited, circulated it to those around you and finally took a deep breath and sent it off.  And Lo:  It wasn’t rejected.

When my younger son Colin (one of my tougher critics) read Literally Dead his first observation was that he was surprised at the detail I went into concerning the New England town that is the setting for the story.  Why, he asked, did I explain that the town square was in fact round?   Why did I mention the nearby Mahogany mountain range, or the fact that the next town down the road was Shinn Corners?  And why was it necessary to mention that the statute in the middle of the square (err, the round square) was the town’s founder, Jezreel Wright?  Colin knew that most of my short stories are, in fact, Ellery Queen pastiches.  But Colin (alas, like many of his generation) had not in fact read Queen.  So he did not know about Wrightsville.

If you have read Ellery Queen you will be very familiar with Wrightsville, the small upstate New York town that was created by Frederic Dannay and Manfred B. Lee back in the 1940s to get Ellery out of the city on occasion.  The Wrightsville mysteries begin with Calamity Town, published in 1942, and thereafter the little town with its recurring characters is the focal backdrop for a host of Queen mysteries, all the way through the penultimate Queen novel The Last Woman in his Life, published in 1970.

During the almost 30 years that we see the town through Ellery’s eyes we watch it change.  Characters come and go; Police Chief Akins retires, only to be replaced by the flinty Anselm Newby, with whom Ellery will spar in “Literally Dead.”  In the Queen retrospective portion of Tragedy of Errors Richard and Stephen Dannay, sons of Frederic, have noted that the town itself was inspired by the poetry of Edgar Lee Masters in Spoon River Anthology.   One episode of the NBC Ellery Queen series was situated in Wrightsville, and Ed Hoch also chose the New England village for his final Ellery Queen pastiche, The Wrightsville Carnival (EQMM September/October 2005).  So I was not the first interloper to return to the town in search of the further adventures of Ellery. 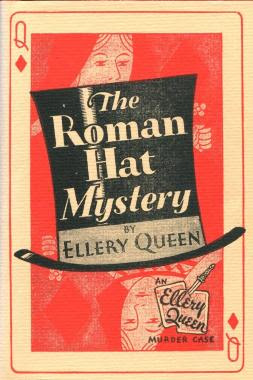 One of the more difficult tasks in writing an Ellery Queen story is dealing with the backstory that defines Ellery.  In all of the Ellery Queen stories there are virtually no descriptions of Ellery himself.  But boy, there sure is a lot of other background for a writer of pastiches to grapple with.  Some of the Queen backstory is easy – Wrightsville either stays the same or grows along predictable lines.  But Not so Mr. Queen himself.

The Ellery Queen we first meet in The Roman Hat Mystery, published in 1929, is young, foppish, and at times rather insufferable.  He wears pince-nez glasses, carries a cane, tools around in a Dusenberg, and spouts erudite but hopelessly obscure references from the classics.  We are told by the mysterious “J.J. McC”, who provided the introductions to the early Queen novels, that Ellery eventually retired with his wife and son in Italy.  (By the way, anyone paying careful attention when reading Queen’s Face to Face, published decades later in 1967, can stumble upon the true identity of Mr. J.J. McC!) 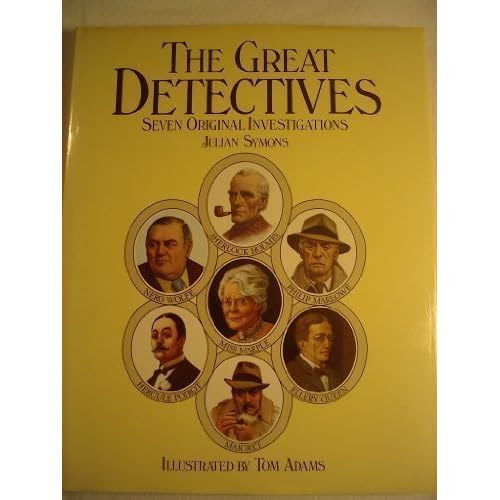 In any event, all of this early Queen backstory changes abruptly and radically half way through the Queen library.  From the appropriately-named Halfway House, published in 1936, on Ellery, morphs into a young middle age man, and takes on a more vulnerable and likeable character.  He ditches the pince-nez and cane and discovers self-doubt.  The spouse, the son and the idyllic life in Northern Italy disappear like fingerprint dustings in the wind.  So unlike the previous Ellery is this incantation that the late Julian Symons, in his omnibus The Great Detectives, speculates that the Ellery of the second half of the series was in fact the son of the Ellery of the first half, a theory that Frederic Dannay scoffed at when he met with Symons at Dannay’s home in Larchmont, New York.

In any event, having brought about this phoenix-like change, Ellery proceeds to stay basically exactly the same for the next thirty-five years.  This is true of Ellery’s father, Inspector Richard Queen, as well, who is almost always nearing retirement, but never getting there.  I had to say “almost” and “basically” because there are still rents in the Queen backstory fabric.  Thus, the Inspector does retire in Inspector Queen’s Own Case, published in 1956, the same volume in which he becomes engaged to Jessie Sherwood.  Further confusion ensues, however.  By The Player on the Other Side, published in 1963, the Inspector is not retired, and Jessie is nowhere to be seen.  And then in The House of Brass, published in 1968, Jessie is back, and Richard Queen is (again) retired.  Thereafter in the final books of the series – The Last Woman in his Life, (1970), and A Fine and Private Place, (1971) Richard Queen is back at work and, again, Jessie has disappeared like that pair of pince-nez. 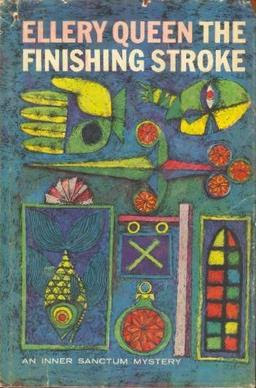 Which brings us back to Ellery,  As noted, from around 1936 on he is portrayed uniformly, and in fact appears almost not to age at all.  But with one notable exception:  The Finishing Stroke.  That mystery, (probably my favorite Queen novel) was published in 1958, and was reportedly planned as the final Ellery Queen mystery.  The story opens in 1905, jumps to 1929, where we find a slightly re-invented version of the early Ellery, and ends in then present-day 1958, where Ellery is portrayed as a man in his early 50s.  In fact we are explicitly told in The Finishing Stroke that Ellery was born in 1905 (the same year that both Dannay and Lee were born).  But after the careful construction of this backstory in The Finishing Stroke, the rug is again pulled out from under us:  With the exception of And on the Eighth Day, a 1964 throwback novel featuring a young Ellery, complete with his Dusenberg, set in 1942, all of the remaining Ellery Queen novels feature Ellery as a young man, in the year the novels were published.

My philosophy in writing pastiches, as I have mentioned before, is the same as the physician’s charge:  “first, do no harm.”  I think that if you are going to attempt to bring back the creation of others you must be as loyal as possible to the original.  But still, with Ellery, as we have seen, there are choices.  An author  attempting to recapture Ellery in a new story has some varying paths that can be followed.  Many Ellery Queen pastiches basically follow the majority of the works of Dannay and Lee and portray Ellery as a young man in a present-day world. This is how Ed Hoch and Jon Breen, for example, chose to portray Ellery in pastiches that they wrote.

Perhaps because The Finishing Stroke is a personal favorite, I have always followed the strictures of its time-line and have therefore set a course different from that of the majority of the Queen mysteries.  Thus, in my Ellery Queen pastiches Ellery has always been born in 1905, and is portrayed in any given time at the correct age.  Ellery therefore was 102 when he solved the mystery of the double murder in The Book Case, and he was 70 when the NBC Ellery Queen series was being filmed and the The Mad Hatter’s Riddle took place.  Ellery’s age is a little more difficult to discern in the upcoming Literally Dead, but those paying close attention should be able to approximate it from at least one clue in the story.

But, in any event, when you set yourself the task of writing a Queen story this is the type of baggage that comes along with the project.  Some years back Leigh Lundin commented to me that the great thing for about writing new Ellery Queen stories was the fact that the detective came with a pre-packaged backstory.  Perhaps you will understand why my response was laughter.

Dale, the level of detail amazes me and indeed, I don't know anyone who does it better. I take of my foppish hat to you!

Even the great William Baring-Gould would be hard pressed… or at least would be impressed. My objection to many Holmes pastiches has been some writers who failed to absorb what has come before. (Robert Downey Jr said he'd never read Sherlock Holmes before he was cast for the movie… and it shows. No word if he read Sherlock Holmes after he was cast, but I doubt it.)

And congratulations on your story!

Congratulations on a nice sale!
Ellery Queen, the detective, that is, should be pleased by your attention to all his vital details.

Sincere congratulations, Dale--on the sale and on a fascinating column. I look forward to reading your story.

Thanks for the posts, all. Leigh -- any comparison to W.S. Baring-Gould is a higher than deserved compliment! John -- more correctly, you would have to "look forward to reading [the] story AGAIN!" And on that note, thanks to both Leigh and John for editorial suggestions during the drafting process!

Well done, Dale! Congrats on the story! Great article, too. Now, I know why I don't attempt pastiches--it's too hard. I look forward to reading the story.

I would be remiss not to also mention that anyone interested in following the Ellery Queen backstory has at hand the wealth of information assembled by Kurt Sercu on his encyclopedic website "Ellery Queen: A Website on Deduction."