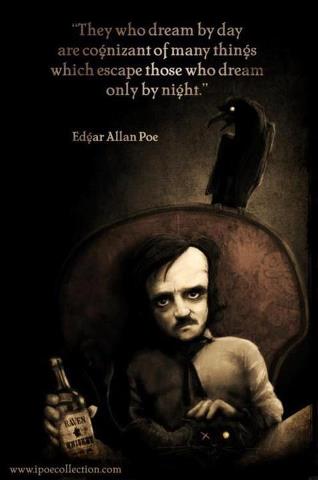 ﻿﻿﻿﻿﻿﻿﻿﻿﻿
Yes, I am a daydream believer. (And I dare anyone born in the latter part of the last century not to mentally humming right about now. (Missing your smile and sweet voice, Davy Jones!) But, it's about more than a song's lyrics and melody. Daydreams lead to interesting ideas.

Daydreamers may incite teachers to insist their students stop and pay attention to their instruction, but for most of us, daydreaming transports us to other places and times and relieves many  boring moments in our lives.
For a writer, daydreams inspire many stories yet to written.

While night dreams may also lead to plot ideas or characters, for me those sometimes head into darker places. I have written those stories, too, but I appreciate where daydreams take flight. The initial trip to Daydream Land may be innocent enough, but often leads me to an intricate plotline that turns sinister.

Daydreaming has led me to ask What if? Why? and How?

They've led me to wonderful dark thoughts that transpired into Noir storylines. Admittedly, I have an affinity for hardboiled detectives, so those day trips to my imagination brought fun to write short stories where I get to plack (my mother's made-up word when she was a kid that was an abbreviation for "play like") as a hardened private eye chasing down a bad guy that was really bad.

Some of my personal recent daydreams include:


Do you live part time in fantasy land, too? Maybe we'll meet up in a daydream or two! What fun that would be!
﻿
Posted by Deborah Elliott-Upton at 00:00