As you may have noticed from posting datelines below my recent articles, I'm traveling, which is taking me through South Africa. At the moment, I'm being unforgivably rude by closeting myself in a corner of my friends' beach home as I dash out this article, the result of a sudden decision to take down my intended column for today and slap up a new one… with good reason.

The friends are Tig and Sue and their house in Port Shepstone overlooks the Indian Ocean, where in the distance, whales are breaching as I write. Yesterday, they give us a tour of the Oribi Gorge where the deer and the antelope play… or rather monkeys and impala, the real kind, not those bred by Chevrolet.

This sounds exotic to those of us in the Northern Hemisphere, but what I've found more amazing is how comfortable, how natural South Africa feels, at least this province of KwaZulu-Natal, birthplace of the Zulus.

Family helps of course, and everyone has made me feel like family. There's English, too– North Americans don't have to struggle with phrase books because everyone speaks more English English than most of us do. S.A. politics are as mad as America's and our sense of humor shares the same DNA. Except for occasional vervet monkeys scampering through the back garden, you couldn't possibly find this beautiful land all that different from ours.

So with abject apologies to my gracious and forgiving host and hostess, on with the article.

One of the last things I did before journeying across the seas was to forward subscriptions for Alfred Hitchcock and Ellery Queen Mystery Magazines. Thus, I was happily able to enjoy RT Lawton's bail bond twins and Janice Law's 'Medium' in the last issue and Rob's story 'Brutal' in the current one. Damn, SleuthSayers has great authors, don't we?

Reading these stories reinforces how good these writers are. If anything, their talents are understated, because I find myself marveling and taking a sort of proprietary pride in knowing them. And before I forget, Janice Law has a historical coming out later this year, which I'll ramble about in an upcoming article. 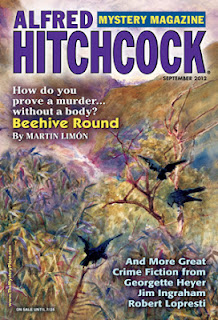 I've read all but two stories in this, the September issue. I know, I know… the magazine industry dates their periodicals like automobile companies… is the 2013 Dodge Viper out yet?

Rob Lopresti, as usual, received mention on the cover for his wicked story 'Brutal'. It's sly, it's funny, it's a groaner… I can't say more without giving away too much.

The story reminds me of one of John Lutz's parables. There's an author's adage to heap misery on the hero until he can't take any more… and then dump on even more. You might say both writers turned that adage on its head.

Read AHMM to see what I mean. But wait, there's more…

Jolie McLarren Swann, otherwise known as James Lincoln Warren, graced the previous (August) issue with 'Inner Fire', the Black Orchid Novella Award-winning takeoff on Nero Wolfe, which I was previously permitted to critique– actually rave about. You do not want to miss this story. 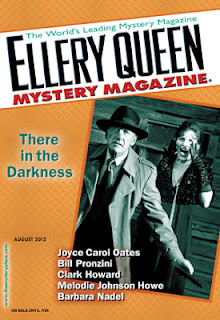 Although Ellery Queen inexplicably omitted SleuthSayers authors in the current August issue (don't ask me to explain why the magazines' dates differ), they do contain articles by two of our friends.

Terrie Moran, our pal at Women of Mystery, has come up with a nuanced tale set in Florida. Terrie is one of those authors who never stamps out the same kind of story twice. Each seems very different from the other. Her latest seeps with research she's put into it. 'Fontaine House' reads like a southern romance… without the romance. With a pinch of love in the air, I could picture an offshoot of this story winning a RWA competition. You'll probably gulp at the end.

Melodie Johnson Howe, our colleague at Criminal Brief, created the series Hollywood fatale Diana Poole, who appears in a new book, Shooting Hollywood, on sale at disreputable bookstores everywhere. Now I liked Diana Poole, but I love her new story, 'Losing It', a deceptive tale about a stolen shawl. I doubt most readers will come close to guessing this unusual plot; I certainly couldn't. And like I said above, you'll probably gulp at the end. 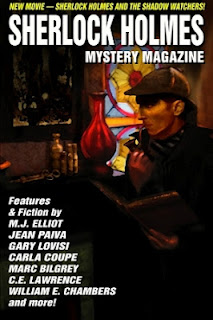 Jeff Baker placed a story in Sherlock Holmes #8, which I haven't seen yet. Herschel Cozine wrote a parody in the queue for December, issue #10. This is my wake-up call to subscribe.

And More Coming Up…

David Dean's scheduled for the December Ellery Queen with "Mariel."  A reprint of "The Vengeance Of Kali" will appear in an Ed Gorman edited anthology, Best Mystery Stories Of 2010.

Jan Grape co-edited an anthology released in May, Murder Here Murder There from Twilight Times Publishing, which includes her short story 'The Confession'.

Elizabeth Zelvin has a CD out. She also currently has out her third novel, Death Will Extend Your Vacation, 'Shifting Is for the Goyim', coming out on Untreed Reads very, very soon, and a story in Ellery Queen that will appear in 2013.

John Floyd has several stories in the queue… Actually John's like the British Empire… The sun never sets on John's stories– they're everywhere. John reports a story in the current Woman's World and another coming up there in August; stories coming up in future issues of Hitchcock and Strand Magazine; stories in issues #8, #9, and #11 of Sherlock Holmes Mystery Mag; one in Prairie Times; several coming up at Mysterical-E; and stories forthcoming in three anthologies. John will also release a fourth collection of short mystery stories, called Deception, scheduled for next spring.

Janice Law wrote a story in Connecticut Muse, one in the most recent Sherlock Holmes Mystery Magazine, and an entry in the recent MWA anthology.

Rob Lopresti has another AHMM story about six months from now.

Readers and writers, who have I missed? Let me know and I'll add you in.

You don't have to have your literature shipped to South Africa… find them at bookstores and newsstands now.
Posted by Leigh Lundin at 06:00

Enjoyed the column, Leigh--as usual. Congrats to everyone who has stories out or upcoming.

As for your question, I have a mystery in this week's (July 9) issue of Woman's World and another coming up there next month, and other stories upcoming in AHMM, The Strand, Sherlock Holmes, etc.

I knew I was missing some. Thanks' for bringing me up to date.

leigh, thamks for the kind words. always mean more from a fellow struggler in the trenches. I actually had a similar thought to yours recently. just about every issue od EQ or AH that comes along now sems to feature at least one of my fellow bloggers, current or past, and/or people I have met through email or conferences. almost makes me feel like I'm sitting at the cool kids table.

Leigh, thanks so much for the shout out. I am especially pleased to be sharing space with Melodie.

Rob brings up a great point--I have always received my subscription copies of EQMM and AHMM with great anticipation because I know the stories will be highly entertaining. In recent years, it has become even more fun because so many stories are written by people I now consider to be friends.

And Leigh, thanks for the alert about SHMM. I did hear (and promptly forgot) about it. I'll have to subscribe. More short fiction! More friends!

Terrie, you're quite welcome and I was pleased to see your story.

Rob, I simply enjoy sitting at the kid's table. Fun, isn't it!

Leigh, thank you so much! I reccomend SHMM highly, I've subscribed since issue #1. It comes out about once or twice a year but is worth the wait. (I would have said that long before they bought something of mine!) I'm way behind on my reading but I have a stack of the aforementioned magazines I'll have to get to get to! AND thanks so much for the kind mention of yours truly, Jeff Baker.

You're welcome, Jeff. I look forward to reading your story!

Thanks for the mention, Leigh. Isn't it great that everybody's getting work! Every time I pick up a magazine or anthology these days there's a SleuthSayer, or friend thereof, in it. It makes me feel connected...and good. Congrats, everyone!

Enjoyed the article, Leigh. Have a great time during your world travels!

Loved the double entendre in the title, Leigh.