Along about the Summer of 1980, I got orders for a special down in Miami. These "specials" came up from time to time whenever the agency temporarily needed extra manpower to help out in a certain region. For this one, the Miami group which normally worked with Customs and Coast Guard was headed down into the Caribbean for their own special operation in some of the islands, so the agency brought in other agents from all over the U.S. to replace them. That's when my name came up in the rotation and I got drafted to Miami. 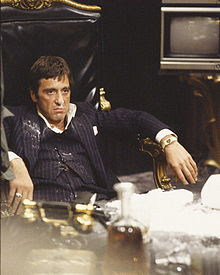 In those days, Castro had already emptied many of his prison cells and put the inmates on boats headed for Florida. You've probably seen Al Pachino in Scarface. Well, those were some of the Marielitos that ended up in Liberty City under the Interstate overpass. Liberty City as a holding center was winding down by the time we got there, which meant many of its inhabitants were now residents of Miami. This was also the era of the Cocaine Cowboys, low-flying planes dropping clandestine loads in the Everglades, go-fast boats running in from the Bahama Banks and mother ships coming up from Colombia. Miami was flush with drug money and vibrated with adrenaline.

Most nights, our group hooked up with Customs agents a few hours before dark. They'd take us to a Cuban restaurant for supper and then it was down to the docks for a briefing. One or two of our guys always got assigned to the Customs tug that had radar on it. The rest got singled out to go-fast boats previously seized from smugglers and paired up with Customs agents. 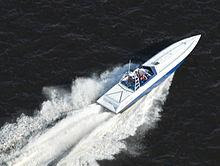 Out on the water, sometimes in sight of the city lights and sometimes sitting off some dark part of the Florida coast, the tug would take up a position in the middle of our long, thin line, while the go-fasts spread way out to either side. We hunted in wolf packs, waiting for a radio call from the tug that their radar had picked up a fast moving blip coming in from Jamaica, the Bahama Banks or elsewhere. Smugglers trying to make a midnight run with offload crews waiting at a secret rendezvous.

The Customs agent in my go-fast would slap a blue Kojak light on the prow, kick the engine to life and away we'd go. Nobody had uniforms to identify ourselves, except the Captain and the First Mate on the tug. The rest of us in those days wore plain clothes. All we had were our badges, side arms and that blue revolving light.

When smugglers saw that flashing blue light, they'd try to turn to one side, but if we had done it right, then we'd soon have other flashing blue lights converging on both sides. Most times, if they could, the smugglers would keep on going, run their boat up on the nearest beach and disappear into the night landscape. They'd merely abandon their vessel and its contraband load. Better than a stretch in federal prison. 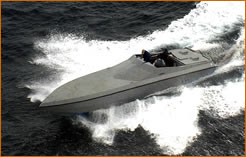 What we found out later was that most smugglers wouldn't even think of stopping because of other actions happening further south in the Keys. Seems there were some good ol' boys in some of the back waters who had their own go-fast boats, but didn't have enough front money to get involved in the drug trade, so they went out and bought their own blue lights. They'd motor out into the southern Florida waters and pull over boats they thought were smuggling. If they caught a load, they'd steal it, shoot up the other boat and maybe its occupants. This made smugglers a little antsy about pulling over for any blue light. Can't say I blame them, but it made our job harder. 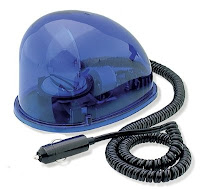 On quiet nights, if the Customs agent got bored, he was likely to slide our go-fast up next to a private fishing boat in the dark, slap the blue light on, knock on the hull with his knuckles and announce his authority. When a head appeared over the rail, he'd tell them we were coming aboard to check records and maybe search the guy's boat. Some smugglers relied on hidden compartments and the appearance of normalcy to bring in their loads. Thus, we ended up searching for fresh seams or paint in the cabin and after deck. Anything that looked newly reworked or out of place.

Of course, the trick for us landlubbers gone to sea for the first time was learning how to board from one dead-in-the-water boat to another dead-in-the water boat while both platforms were bobbing up and down in ocean swells out of synch. One mis-timed leap and you could either land on the far side of the other deck with a lot of momentum headed for the outside rail and a quick bath, or one could find himself suddenly pressed flat against the other hull and sliding down....towards a quick bath.

Like most surveillance, the majority of nights were quiet and boring. But then, came those nights filled with adrenaline, excitement and the BLUE LIGHT SPECIALS. We're not talking K-Mart here.
Posted by R.T. Lawton at 00:01