Close - But No Spring Roll

A few years ago, round about the time when I was flirting with the gilded chimera of Hollywood, just at the same time in fact, I was seduced by another chimera from the other side of the world. Out of the blue I was contacted by a young person who offered herself up as my agent to sell my stories in mainland China. This young person had been instrumental in introducing EQMM to China, and her credentials seemed tip-top.
"Hmm," I said to Mimi, "China. Just what we've been needing."
So, to cut it short, I parcelled  and disked up a load of my oeuvre and bunged it off to the young person, mostly my published stuff but including one or two stories that had been rejected. Hah! That would teach 'em.
Well, the young person came up trumps. Not long after, she announced that she had found a publisher who was willing to publish two - not one, mind - collections of stories. I read the letter with trembling eyes.
"What is this hectic flush that is suffusing your dear face, beloved one?" asked Mimi. I gave her the glad news, and she suffused along with me.
I received two contracts -one for each collection, and all was tickety-boo. The publisher was - still is, for that matter - Qun Zhong in Beijing.
I rummaged around on the Net and managed to Google Qun Zhong. When Google had translated the publisher's pages for me, I found it wasn't half bad. This was the same publisher who had on its list James Patterson, Clark Howard, lots of Sherlock Holmes, Robert Brainard ( not inaccurate as translations go). They had the first Spenser novel, billed as 'The Gude Fu Handscroll', which is close enough. And they had Philip Margolin, otherwise known as Philip Ma Gaolong.
"Well," I thought, "I'll gaolong with that."
I received a smallish advance for each collection and that was that for a year and a half. The young person taking umbrage at a fairly innocent remark I made in an e-mail, scuttled off into the undergrowth never to be heard of again and I was left along with Qun Zhong or rather with Ms Zhang Rong, who was the editor in charge.
That hectic flush came and went several times in those eighteen months. Sometimes I looked like a set of traffic lights as I did the arithmetic. One billion, six hundred milion people in China, I reminded myself. Now say, just one-tenth of one percent bought a copy of just one collection - no it was too much, the brain refused to cope with the maths.
Nobody ever asked questions about the translations. They were just getting on with it, I supposed. But I did wonder how they were coping witht sentences like the one in 'Mine Hostage', one of my first EQMM stories, when a character says: "We've been stitched up. Done up like a kipper, we've been."
But I supposed they knew their business.
And after eighteen months, I had a bulky parcel through the post. Six copies of each. The first looked exactly like this: 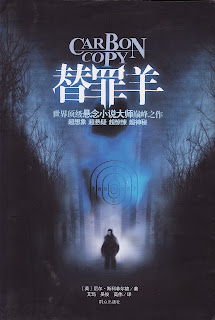 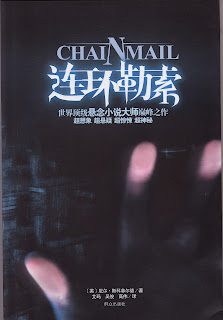 ﻿They were what I suppose we would call Trade Paper Backs, but like no TPB I'd seen. The covers were beautifully produced, and the paper, well, the paper had nothing to do with paperbacks. It was almost silky to the touch, not that rough stuff we're used to.
It was beautiful work. The only hiccup being that although I'd written every word - well, ideogram, I guess - in these two gems, I couldn't make head nor tail of them. Never mind, I could show them to people, and people said: "Lovely. What does it say?" " Never mind that," I said, " look at the workmanship." " Lovely," they said again. Ah well. Somewhere in China I told myself, people were handling these jewels, and were actually reading the words.
Some were, in fact, but not quite enough. When Rong ( and that's something you've got to get used to - the first name comes last) sent me the first accountings, the numbers were lowish, about 3,500 copies of each sold. And the royalties had been munched up by the advance. So another chimera bit the dust. But not quite. I've still got six copies of each preserved in a jewelled reliquary, and the knowledge that on the other side of the world bookcases in apartments and houses hold copies of these two things.
They're still on the Qun Zhong list, these two collections. I occasionally peep at them, just to make sure. The blurb is interesting.
It goes like this: "Neil Schofield is one of Britain's famous suspense novelist, reporter origin, known as the "devil" writer."
And there's more:
"The reader not only his treacherous plot attracted but also because of its mysterious ending and cannot help laughing and then to appreciate the complexity of human nature and survival of the sinister."
Well, Google. You know.
But I love that 'survival of the sinister,' bit. That's poetry, that is.
In case anyone wants to become a devil writer like me, here's Rong's e-mail address.
hellenzr@msn.com
An enquiry can't hurt, can it? And you never know. Life is full of surprises.
Posted by Neil Schofield at 02:31